Recycling Detainees Of releasing detainees, then incarcerating them again for new cases 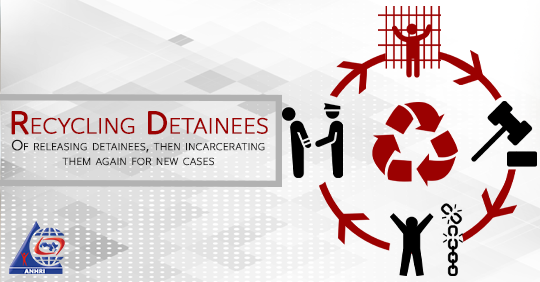 Recycling is originally a modern industry concept, that cut expenses and reduce industrial process waste. In Egypt, however, recycling was turned into one of justice apparatus techniques that in contradistinction of its namesake increases justice process costs and waste.

The term “recycling” is used to denote cases where a long delayed release order is issued for a political detainee, who is then submerged by convoluted procedures, some of them are illegal, only to find himself once again referred to the prosecution for a new case with the same old charges or with new ones. He might even be included in a new case whose alleged events have taken place while he was incarcerated, making it practically impossible for him to have taken part in it. The detainee may enjoy his freedom for a few days, or months before being arrested and detained again, or he might not be allowed a single hour of freedom before returning to the prison again.

In case under investigations, the defendant is incarcerated on remand by an order of the prosecution till he is released bending further investigations either with a precautionary procedure or on bail. At this point there is what is legally supposed to happen, and there that what really happens.

In the following we first explain what is supposed to happen according to law:

The aforementioned procedures are as per the law, and they are supposed to be concluded in no more than two days, after the issuance of the release order.

What really happens however is the following:

Accused in a new case

In the time of waiting for the National Security approval, the apparatus inspects the defendant file and decides whether it will allow his release or not. In many cases the National Security bypasses the release order by recycling the defendant in a new case, referring him once again to prosecution with nothing more than an investigations report. The prosecution, goes on and issue a new order of detention, thus the defendant is once again incarcerated before even being released in compliance with the first order.

Cases of recycled detainees can be categorized into two types:

The following are some examples.

A humans rights lawyer, founder of Disappeared Persons Families Association, which he founded after his son was disappeared after the Rab’a sit-in forceful dispersal. He is in solitary detention since 2017 in Aqrab prison. He suffers from health problems that were exacerbated due to harsh detention conditions. After being released on remand of the first case, he was recycled in a new one that began in the time he was in custody.

Deputy president of Strong Egypt Party. He was arrested at home on 8 February 2018, was forcefully disappeared for two day before being included in the case known as “Mekamileen 2”. Kassas remained in solitary detention for 22 months, when he issued a release order, but before the execution of the order he discovered being included in a new case with the same old charges.

He is a sarcastic blogger, and a marketing manager, was arrested because of his sarcastic posts in November 2017, and was charged with accusation contradicting his known opinions. He remained in detention till August 2018, when an order of his release on bail was issued. Before the order was executed he was included in a new case to remain in detention till July 2019, when he was released again, only to find himself accused in a third case, and remains in detention till today.

He was arrested on 20 December 2017, at his home in Dokki. All his belongings were confiscated including his mobile phone, his employment in Dyar newspaper, and social insurance papers, his criminal report, apartment contract, and journalistic archive. He remained in detention till the maximum legal period was over, thus a release order was issued in December 2019, but he wasn’t released but was included in a new case. He is still in prison today.

A glimpse of freedom then into prison again

In such cases the prisoner is free for a few days, usually with a precautionary procedure. He gets some of his freedom for a while, only to find himself, once again, included in a new case, and detained in a short time.

The cases above mentioned are only a sample of tens of similar cases of detainees, whose re-arrest was deemed necessary by National Security apparatus, and thus were recycled in new cases, to be kept in detention indefinitely. It’s not only that the by law maximum detention periods are used as illegal penalty, but it is also being further elongated by recycling in glare preach of laws perpetrated as always by the National Security apparatus.