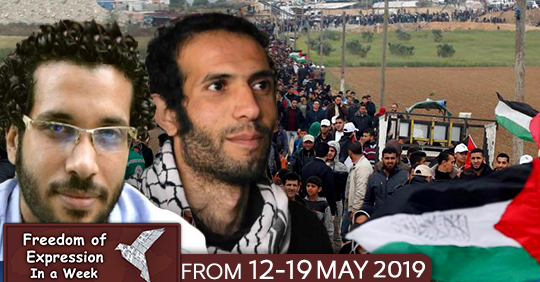 On 13 May, the security forces arrested Leftist political activist Haytham Mohamadeen, who has been placed under police surveillance since his release in October 2018 after spending five months in pretrial detention. The next day, on Tuesday 14 May, political activist Mostafa Maher was also arrested by the security forces. The two appeared before the Prosecution before it decided to hold them in detention for 15 days pending investigations into the alleged accusation of “colluding with a terrorist group to achieve its goal.”

Egypt’s Journalists Syndicate filed, on 13 May, a lawsuit before the Court of Administrative Justice’s 2nd circuit at the State Council challenging the new list of sanctions and measures issued by the Supreme Media Regulatory Council (SMRC), in implementation of the Syndicate’s Council’s decision taken in its meeting held on the 4th of last April.

The administration of Al-Tahrir News announced, in the evening of 14 May, that visitors cannot access Al-Tahrir newspaper’s website.

The administration, hence, communicated with Supreme Media Regulatory Council (SMRC) and the Journalists Syndicate’s head. They both said that no decisions have been issued with regard to blocking Al-Tahrir website. Thereafter, the administration sent official letters to the Ministry of Communications and the National Telecommunications Council.

The Sudanese Doctors Central Committee announced the death of four people, including a police officer, and the injury of more than 200 people, while attempting to disperse the sit-in of the General Command of the Sudanese Armed Forces on 14 May.

The Sudanese Doctors Central Committee, also, announced the death of Ahmed Bakry Kheirallah (28) on 17 May, after being fatally hit by three bullets, two in the abdomen and the third in the spine, during the April 7 March.

65 protesters injured in the Great March of Return

The head of Public Relations and Information in the Palestinian Ministry of Health and the spokesman for the Ministry of Health in the Gaza Strip, said a total of 65 people have been wounded in the eastern Gaza Strip till the 15th of this May. The injury was as a result of the Israeli occupation army’s attack on the participants of the march marking the 71st anniversary of the Nakba Day in 1948, when hundreds of thousands of Palestinians were forced to leave their cities and villages.

The Ministry of Education Undersecretary in Medenine (southeast of the country) barred journalist Afaf al-Wadrini, a correspondent for “Tunis Arrakmia” newspaper, from carrying out her work covering the protest movement organized by a number of teachers, before he threatened to sue her.

On May 13, Sheikh Sabah Al-Ahmad Al-Jaber Al-Sabah, Emir of the State of Kuwait, issued an Amiri decree pardoning citizen Salim Al-Dosari, aka “Abu Refa’a”, after he apologized for sharing his previous videos through “Snapchat” that were deemed by authorities “offensive” to the Emir.

The state-affiliated Qatar Foundation for Elderly People Care (IHSAN) has intervened to ban “Anbar 15” (prison ward 15), which was due to be presented in the upcoming few days; because it discusses the issue of parental disobedience where parents are sent to elderly care houses by their sons.

Media professional Majid al-Shaabi, editor-in chief of “Al-Boad Al-Rabea” (Fourth Dimension) website, was wounded in the right hand by a Houthi- affiliated sniper, while he was covering battles in Qtaiba area, north of Dhala province on 12 May.

Human rights defender Nozha al-Khalidi, affiliated to “Equipe Media” group of activists- a group of journalists involved in documenting human rights violations- is brought to trial today, 20 May, at Laayoune in Western Sahara on charges of impersonating a journalist; against the backdrop of her detention on the 4th of last December while she was shooting a peaceful protest.

The Communications Sector of the Ministry of Culture and Communication announced on May 14 that 372 electronic newspapers have reconciled their statuses and positions, all over the country and until May 9, in accordance with the Press and Publication Law.

On 14 May, Al-Dhafra Court of Appeal adjourned considering the case of the two young men who took pictures of the dugong, or sea cow, of Nafak Sea while they were boarding a small boat belongs to the Environment Agency in Marfa City, without getting permission from the competent authority, before they shared the pictures on social media. The court set the case for adjudication at the May 21 hearing.

A march for the unemployed dispersed by force

On 14 May, the security forces broke up a sit-in staged by a number of unemployed persons in Tenerkuk district of Adrar province (about 800 km south of Algiers), before they arrested many of them resulting in violence acts, which left 14 police men injured and four protesters seriously wounded.