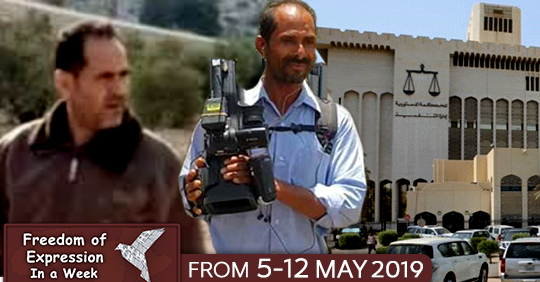 A group of journalists have sent a memorandum to Egypt’s Journalists Syndicate condemning the statements recently made by Khaled Mery, the syndicate’s board member and the Secretary-General of the Federation of Arab Journalists, as he deemed the imprisoned journalists to be merely criminal prisoners who have no relation to opinion-related and publishing cases. The journalists have also raised a number of demands including investigating Khaled Mery over his false remarks calling upon the syndicate to intervene for the swift release of all detained journalists.

On 5 May, the Public Prosecution decided to hold Dr Khaled Azab, chief of Projects Sector at Bibliotheca Alexandrina, in detention for 15 days pending investigations after being accused of spreading false news and misuse of social media.

On 9 May, Amman Magistrates Court sentenced Taha al-Daqamseh to one year in prison on a charge of “lengthening the tongue” in accordance with the Cyber Crimes Law. In the meantime, the court is presiding over the case of activist al-Khuraisat who is detained over similar charges.

Sudan’s Doctors’ Committee announced, on May 5, that Saa’d Mohammed Ahmed has died from injuries suffered in an attack launched by the Sudanese government in Nyala city, South Darfur, after facing protesters with live bullets, tear gas, and rubber bombs.

On May 6, the Court of Appeal upheld the two-year prison sentence issued against media professional Saad Al Ajmi along with a number of citizens, with the suspension of the sentence’s execution for 3 years, over the case of former Kuwait MP Musallam al-Barrak’s speech at El-Irada Square.

On May 9, the Court of Cassation ordered the acquittal of activist Tariq al-Mutairi from the charge of insulting Saudi Arabia against the backdrop of a tweet he shared via his “Twitter” account.

On July 5, Yemeni journalist Ghaleb Lebash was killed in the countryside of Ibb province while covering battles between Houthi militias and the forces supporting President Abed Rabbo Mansour Hadi in Baldhala.

On 8 May, the judicial police in the city of Berkane (northern Morocco), investigated Moustaga Laqah, the Secretary of the sub- Democratic Confederation of Labour (CDT) syndicate, known as “Kadash”, following a complaint submitted by the mayor of the city for allegedly  “insulting an employee while carrying out his work, unauthorized gathering, and incitement to protest.”