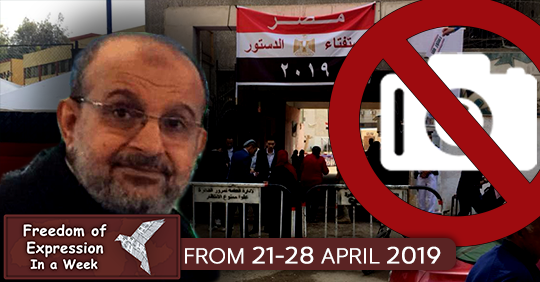 In the early morning hours of April 25, a security force arrested Ibrahim Fahmy, editor at Al-Ahram newspaper’s Culture section, from his home at Sharabyia district, before it seized its laptop and cell phone without revealing the reason for his arrest. The last thing Fahmy published in the newspaper on the day prior his arrest was an article entitled “Secrets of the struggle for wealth and power in Sudan”.

On April 25, Egyptian President Abdel Fattah Al-Sisi imposed a three-month state of emergency in the country, two days after announcing the results of the referendum on constitutional amendments which extended his rule for six years.

On April 23, Abdel Rahman Gamal, journalist at Al-Masry Al-Yom newspaper, was attacked by two Zamalek sporting club’s players, the club’s doctor and one of the administrators and employees working therein, while he was covering Zamalek vs. Pyramids FC match and the ensuing incidents.

Egypt’s Journalists Syndicate issued a report on the violations endured by journalists while covering the first day of the referendum on the constitutional amendments on the 20th of April. The syndicate’s Chamber of Operations received a number of complaints from its members that the National Elections Commission was delayed in issuing permits for journalists to cover the referendum, this is in addition to preventing journalists from entering the polling stations although having a permit from the National Elections Commission, and other complaints regarding the difficulty to obtain the permits.

On 26 April, students from the General Union of Tunisian Students broke up a seminar organized by the Research Unit of the Faculty of Arts and Humanities in Manouba on “The religious phenomenon in Tunisia”. The students at first rejected the attendance of leaders of Ennahdha Party (Renaissance Party) Ali al-Arayed and Abdul-Hamid al-Jalasi, before they kicked them out from the faculty and broke up the seminar.

In the morning of April 25, the security forces broke into the headquarters of Nessma TV channel in Radas (9 km southeast of the capital), and seized its tools and equipment in implementation of the High Commission for Audiovisual Communications (HICA)’s decision; for allegedly airing the channel without obtaining a legal license.

On April 25, the Faculty of Political Science department at the University of Algiers banned a seminar for teachers that was planned to be organized to discuss the “democratic transition in Algeria”, before the administration shut down all the faculty’s halls without giving any clear reason.

Former minister sues a journalist for and libel and defamation

The former Minister of Culture, Ezzedine Mihoubi, announced, on April 27, his appeal to the judiciary accusing Abdelali Mzghish, journalist at the public television, of defamation and slander against the backdrop of posting a photo on his Facebook page that shows the former minister meeting with tycoon Kamal al-Bouchi, who is being detained over a Cocaine case, in preparing for holding a football match.

The security bans a conference for “Rafd” Movement

On April 27, the security forces informed the youth movement “Rafd” that they refused to hold the conference, which the movement was planning to organize to announce its position on the presidential elections due to be held next June in addition to announcing a new campaign that is launching soon.

On April 23, a number of citizens held a demonstration in front of the central prison in the capital demanding the immediate release of bloggers Abdurrahman Ould Waddy and Sheikh Ould Gedo, who were arrested against the backdrop of sharing information on social media about the freezing of two billion dollars for Mauritania in the United Arab Emirates.

On April 23, journalist Helmi Al-Asmar announced in a message to the Jordanian Foreign Minster that Saudi Arabia had arrested the Jordanian journalist Abdulrahman Farahana in Dammama, since more than two months, while his whereabouts hadn’t been revealed since then. It is believed that Farahana’s detention is related to his support and sympathy to the Palestinian issue.

Protesters attack a meeting of the Popular Congress Party

On April 27, angry protesters attacked a meeting held for the Popular Congress Party’s Shura Council at Córdoba Hall in Khartoum, where at least 30 people from the party were injured.

Rapid Support Forces arrested 140 people from the leaders and members of the largest parties that were part of the government of ousted president Omar al-Bashir.

In the evening of April 24, Rapid intervention forces used water cannons and sticks to disperse a sit-in organized by thousands of professors from Mohamed V Street in front of the parliament headquarters to demand their integration into public service.

The dispersal of the sit-in resulted in the injury of about 59 people, as several fractures among the injured members were reported.

The Moroccan Association for Human Rights holds its National Conference

On April 26, the Moroccan Association for Human Rights opened its 12th national conference at the Bar Association in Rabat, which was held after attempts to prevent the association from obtaining the appropriate rooms to open and organize the conference.