A Map for Bypassing Justice in Egypt 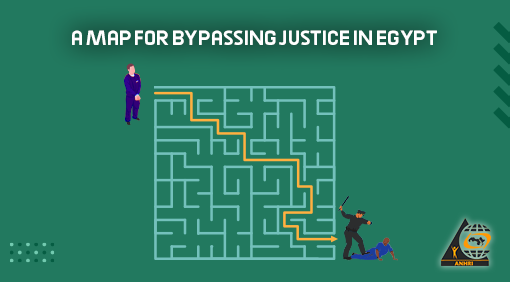 In his book The Spirit of Laws, issued in 1748, the philosopher Montesquieu included what has become a key role of confronting tyranny and preventing the abuse of authorities and a title for the modern state, he addressed the principle of separation of powers, saying:

“The essence of the principle is dividing powers and then the separation between them. this separation is what prevents their being linked to one party or authority; as if this happens it will inevitably lead to political tyranny that will be reflected by harming people’s freedoms.”

The features of powers independence are manifested in a legislative body that holds the executive authority accountable according to the accepted mechanisms. This accountability could reach to the withdrawal of confidence and monitoring the performance of the executive authority and even to filing criminal charges against officials. Such authority would also be responsible for issuing laws that maintain standards of justice in democratic systems, as well as an independent judiciary that separates clearly between the authority and its various devices and tools, as well as among individuals.

Tyranny knows its goal and paves ways to reach it, even if that requires passing over the freedoms and lives altogether. It may start by wasting the provisions of the constitution, and in cases of clear violations, tyrants would amend the provisions and create bodies that seem to be elected and a judiciary system prevented from its independence.

The purpose of this paper

This paper aims to list the situation of justice in Egypt, in which ways it is being wasted, the conditions of those punished with pretrial detention, the number of times of detention renewal for each accused, and the so-called security excuses, in addition to the phenomenon of rotation with new cases.

The approach in this paper draws a map of the violation of justice in Egypt, which are not only prevented by verses of laws and the constitution, but also do not have any judicial precedents established or implemented for decades. The judicial system in Egypt used to build upon the precedents, regardless to the frequency, but it has never witness a long break like the one ongoing in Egypt right now.

The paper also will tackle the decision on lifting the state of emergency and whether this has any effect in reality or not. Then another part will approach the pretrial detention, as well as to the rotation approach by which the released prisoners return to prison again on different cases. Later the paper reviews the material and procedural obstacles that represent a circumvention of justice, such as the paper imprisonment renewal, the pretrial detention and the influence of security investigations. Then It determine which party is responsible for those violations and finally recommending solutions.

People usually celebrate the abolition of the state of emergency because it should be the end of an exceptional state that contradicts the natural conditions, and its abolition pushes towards a normal state that everyone feels. This celebration did not happen after lifting the state of emergency on 10/25/2021, which was imposed since 2017 by based on a void constitutional interpretation of Article No. 154. The Article authorizes the President of the Republic the right to declare a state of emergency after the approval of the House of Representatives. After obtaining the approval of the Parliament. it specified a maximum period of three months which cannot be extended except for once after obtaining the approval of the Parliament.

The government adopted an interpretation that contradicts the explicit constitutional provision, so the emergency was imposed since 2017 until October 2021. So, the absence of celebrating lifting the state of emergency is due to a number of reasons, including the disappearance of any impact on the ground. There has been nor releases either for convicted nor detainees, the general conditions remained the same before and after terminating the state of emergency.

The exceptional situations which were regulated by the Emergency Law have been imbedded into the ordinary laws, including, for example, Anti-Terrorism Law No. 94 of 2015 and Law No. 8 of 2015 regarding terrorist lists, Law 121 of 2019 and Law 22 of 2018, as well as other amendments to the Penal Code.

Moreover, after announcing the termination of the state of emergency, the amendments of the provisions of Law 136 of 2014 regarding the security and protection of important and vital facilities made the jurisdiction of military judiciary responsible for the crimes related to this law, which confirms the credibility of not celebrating the end of the state of emergency.

In many cases the detainee completes the maximum period of pre-trial detention stipulated, and still the authorities keep him/her in prison. The law on pre-trial detention has not been amended, as it will provoke political and legal reactions in addition to other drawbacks in this file. What happens is that, the accused after spending the entire period and has to be released immediately they draw new charges against him/her and extend the imprisonment based on the new charges.

The detainee could be prepared for the release and when being almost at the gates of the prison going out, they tell him/her that there is a new report against him/her. Sometimes the report states that the released person, while being in prison cell, sought to revive an outlaw organization! Or made contacts with terrorists or seek to achieve the interest of a terrorist group. Then the report is being referred to the prosecution and a new chapter of pretrial detention begins. In a precedent that did not occur in the history of Egypt. Dozens of people are behind bars with the trick of rotation, which has become a method.

In many cases, while the family of the accused is waiting for his release based on a judicial decision, they wait for weeks with no news about their son and he disappears, neither being released nor has presented to a judicial authority. Those weeks comes very heavy until the family discovers by chance or through a remote lawyer that the accused who was released is re-interrogated in a new case. In those cases, we face two major violations: disappearance and then rotation.

The constitution stipulates that the accused shall be notified of his accusations in writing and shall telephone whomever he/she wishes.

Question: Have you been allowed to make phone calls?

Answer: No, I was not allowed.

Question 2: Did the prosecution asked you about this or documented it?

Answer: No, they didn’t ask me.

The prosecution is violating the constitution.

One of the common tricks violating the right to defense. Based on the constitution and law, the accused should enjoy the right to the presence of his lawyer during the interrogations. But what usually happens is that the Public Prosecution intends to single out the accused in the first interrogation session without his defense. Or prove in its report that they sent asking for lawyers within the Syndicate, and did not find one! Therefore, it conducts the interrogation without the presence of a defense lawyer with the accused.

It is known legally based on the judicial precedents regarding the police investigations that they are just an opinion of their conductors and that they by themselves do not serve as evidence of conviction unless there is evidence to support them. In the judicial norms that are in force so far in diverse criminal cases, a judicial ruling of conviction cannot be based only on police investigations, and that the issuance of a sentence based on that definitely exposes it to cancellation during appeal or cassation.

However, the overwhelming sentences in the majority of political cases are based only on police investigations conducted by the national security, a mere narration closer in some cases to a wild imagination. Most of them talk about achieving the goals of a terrorist group without even specifying the group. It mentions contacting terrorist groups without documenting a single contact, and talk about meetings without anything on the ground! The worst thing is that the same accusations in the investigations are repeated with the cases in which the accused have been rotated. ANHRI monitored that in some cases the accusations are connections with an illegal organization while the accused is imprisoned! It also mentions illegal meetings while being imprisoned! In the end, the accused are being imprisoned again and again in a black comedy that assassinates the rule of justice, which should respect the thought and minds.

The most dangerous criminal measure that can be taken is pre-trial detention, because it deprives the individuals from their freedom before the crime is proven, and before the trial, exceeding the principle of innocence. Therefore, in all modern legislation and in the Code of Criminal Procedure and the amendments made to it in 2006, it is an exceptional procedure, allowed only in cases of extreme necessity.

This exceptional procedure has turned into a rule by ignoring the state of necessity that can allow it under narrow and specific conditions. Since 2013, this procedure has turned into a sword wielded in the name of the law over every accused. There is no difference between an accused of spreading false news or an accused of violence, no difference between a crime with complete evidences but there is no fear of affecting the evidence or witnesses, and another felony, that would have such fears.

For example, the accusations that most of January 25 revolution supporters face is spreading false news, all of which are linked to content on social media and related to the right to expression. and hence there is a technical report that proves the page ratio and documents the content officially, so no one can manipulate it.

On the other hand, manipulation can be carried by another person other than the owner of the page if he has its log-in data. Despite the clarity of this and despite that the conditions of pretrial detention do not apply in such a case, and although it is a misdemeanor not a felony, the prosecution decides the pre-trial imprisonment and then extends it. Then the role of the Public Prosecution in renewal ends, where the role of the court begins, which also extends the imprisonment until it reaches its maximum legal limit. When it is time that the accused has to be released, he gets surprised with an investigation report on a new subject, and finds himself being rotated again to start a new period in prison in an endless cycle.

The situation does not stop at the signing of pretrial detention without clear justifications according to the provisions of the law. Rather, it goes beyond to disregarding clear provisions, including that the pre-trial detainee has to appear before a judge. This was overcome through two methods;

The first, which is predominant, is that the pre-trial detention renewal is done on paper “due to the absence of the accused and allegations that he could not be transferred”. As if the detention procedure was just renewing a license. On paper here means that the prisoner does not attend the session or be able to present new defenses that can be submitted. all the allegations and the case documents remain before the judiciary while the detainee is imprisoned and knows nothing about them. Whether the detainee has an idea about the detailed information of his/her case or thot, the judge takes the decision to renew the imprisonment.

The second; is the idea that the detainee appears before the judiciary online through a camera in his prison cell, and the renewal is being decided without his physical appearance. This is also a violation to the law, but still being done. It is a broad set of arbitrary measures that penetrate the legality procedures and transforms it into a mere empty form void of any content related to the guarantees of the prisoner in pre-trial custody.

Who is in charge?

There is a difference between the political and legal responsibility;