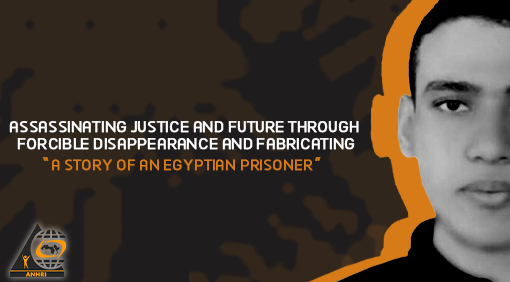 This is a story of a young Egyptian man, among thousands of the unknowns. He underwent forcible disappearance twice, was tried twice, was acquitted twice, nevertheless, he is still detained, still imprisoned, still captured. All bitter descriptions can be applied to him.

Who is Khaled Atef?

An Egyptian young man with an average qualification “Diploma in Industry” lives with his simple family, and as the eldest of the children, he helps his family in sponsoring his four brothers, by working in a food company.

He was twenty-five years old when his family’s home, which lives in Ezbet El Walda, in Helwan, south of Cairo, was raided and he was arrested.

First: The chapters of the story “The Tragedy”

The series of violations that Khaled Atef was subjected to, began on May 18, 2019 when security forces in civilian clothes stormed his family’s home in Helwan. These forces searched the house and destroyed its contents, without showing the prosecution’s permission, then arrested him and his brother and took them to an unknown location.

His family quickly sent telegrams on May 19, 2019 to (the Attorney General, the Minister of Interior, and the Minister of Justice), and as a result of these three parties ignoring the telegrams they received, Khaled’s mother registered a record of Helwan Prosecution, registration number 7042 of 2019, Helwan Administrative Office.

On July 21, 2019, the security forces released Khaled Atef’s brother from an unknown place of detention. Khaled was taken to Helwan Police Station, and a record of arrest was issued under No. 20398 of 2019, Helwan misdemeanour.

On July 22, 2019, he appeared before the Helwan Public Prosecution, in the presence of the lawyers of the Criminal Justice Unit of the Arabic Network. The Public Prosecution accused him of joining a terrorist group with knowledge of its purposes and decided to remand him in pretrial detention for four days.

On July 25, 2019, the appealing judge in the Helwan Misdemeanour Court decided to release Khaled Atef with a financial guarantee of 10 thousand L.E., but the Public Prosecution appealed the decision, which was rejected by the South Cairo Court of First Instance on July 27, 2019 and upheld the release decision which is a final and enforceable decision after his family has paid the financial bail.

Khaled Atef was not released, as the court decided, and despite paying the bail, the National Security officer took him again to an unknown location, and forcibly hidden him for the second time. This prompted his family to send new telegrams to the Minister of Interior, the Attorney General and the Public Prosecutor of the Southern Cairo Prosecutions.

Once again, the fate of these cables was complete silence and no legal action was taken. Which prompted his lawyers to register a report to the Office of the Counsel/Prosecutor General bearing No. 11727 for the year 2019, which was also met with silence and the failure to open an investigation into the incident, despite the passage of more than two months since the incident of his disappearance took  place, after the decision to release him, and all attempts to infer his place of detention failed.

On October 14, 2019, Khaled appeared – nearly three months after his enforced disappearance – inside the Assalam District Prosecution, in the New Cairo Court, for interrogation in the report No. 1502 of 2019 State Security Emergency assalam misdemeanor. In which the officer who prepared the report claimed that Khaled was arrested on the same day, in flagrante delicto while he was in “Al Herafien” residences in the city of Assalam, and claimed that he possessed a firearm, “cartridge,” and a number of two cartridges.

The Public Prosecution decided to remand him in pretrial detention for a period of 15 days, and the sessions to renew his detention continued until it ended on July 26, 2020 by the decision of the East Cairo Public Prosecution Office, to refer Khaled Atef, to the Emergency Supreme State Security Criminal Court, after being registered with No. 2404 of 2020, emergency state security felonies “Assalam Awal”.

On March 30, 2021, the lawyers of the Arabic Network, who are in charge of his defense, informed the court of the circumstances of the case, the accused and the amount of violations that he suffered. The Emergency State Security Criminal Court, north of Cairo, acquitted Khaled Atef of the accusation against him, but Khaled was not released.

Despite Khaled’s acquittal, which required his immediate release, the National Security officers took him again from Assalam Police Station, to the same unknown place where he was taken and disappeared again. This time, his family did not take any legal action, hoping that he would be released after receiving promises to do so, but it did not materialize and he remained disappearing.

Khaled disappeared since the second acquittal he obtained in March 2021, until he appeared on May 23, 2021 inside the Badr City Police Department. Report No. 1409 of 2021, Badr Department administrator, was registered with a false investigation report, alleging that information had been received stating that Khaled frequented the social housing area in Badr City, and that he was inciting youth against state institutions and distributing leaflets. And that the police succeeded in arresting him and presenting him on May 24, 2021 to the Badr District Prosecution at the New Cairo Court.

Khaled was interrogated, without the presence of a lawyer, and charged with joining a group founded in violation of the provisions of the law, possessing and obtaining publications for the purpose of promoting, inciting the disruption of the provisions of the constitution and the law, promoting the ideology of the terrorist Muslim Brotherhood, broadcasting false news, statements and rumors, and obtaining ammunition. (Two shots) without a license.

The State Security Prosecution decided to hold him in pretrial detention pending investigations, and sessions to renew his detention continued until June 16, 2021, when the New Cairo Public Prosecution decided to copy two copies of the papers, the first being registered with an emergency state security misdemeanor number, on charges of promoting the ideas of the terrorist Brotherhood and deliberately broadcasting false news and statements, and the second was registered with an administrative number, about the accusation of joining a group that was established in violation of the provisions of the law, and attached to case No. 43 of 2017, the “Nasr City” administrator to complete the investigations and act.

On June 17, 2021, the Public Prosecution Office of New Cairo decided to refer Khaled Atef to the Emergency Supreme State Security Court in Cairo, to be tried on charges of possessing and acquiring ammunition (two cartridge shots), without having a license, and setting a session for September 30, 2021 to consider the trial.

In that session, his lawyers were able to prove that the accusation had been fabricated by the National Security officers, so the Cairo Emergency State Security Court ruled that Khaled Atef was acquitted of the accusation attributed to him, to be his second verdict in fabricated cases.

However, this ruling was also not accepted by the National Security Officer. Khaled was taken to the same unknown location and hidden for the fourth time, which prompted his family to send a telegram to the Chancellor/General Prosecutor and General/Minister of Interior.

On October 18, 2021, Khaled appeared in the Al-Sharabia District Prosecution at Al-Galaa Court, and was investigated in Case No. 4538 for the year 2021, Al-Sharabia misdemeanour, without the presence of a lawyer, in a clear violation of the procedures law. He was accused of joining a terrorist group with knowledge of its purposes.

The prosecution decided to remand him in custody pending investigations. The authorities were not satisfied with this violation of Khaled’s right, as he was interrogated without a lawyer, but also it prevented him from appearing before the natural judge, to consider the extension of his imprisonment and to have the opportunity to talk about the conditions he has gone through since his arrest. The renewal of his detention was considered remotely through the so-called “electronic renewal”, which is carried out by transferring Khaled from his detention in the Sharabia police station, to the May 15 General Prison, and placing him in an electronically equipped room, crowded with a number of security officers, where the session is held.

This makes it impossible for Khaled to talk to the court about the violations he was subjected to at the hands of the security services, which is in violation of the rules and guarantees of a fair trial.

This is a true story of an Egyptian citizen, a young man who is being abused by the National Security Agency who assassinates justice and kills the future, by violating the law and the constitution without deterrence, relying on the fact that it will escape punishment.

We are facing actions and practices that have nothing to do with the law, where the texts of laws and the constitution become mere ink on paper in books that decorate offices.

Neither the Public Prosecutor, nor the Ministry of Interior, to which the National Security Sector belongs, nor the Minister of Justice have moved to stop these violations, which they learned about through telegrams sent to them by Khaled’s family and lawyers since May 2019, which are: his arrest without permission, his enforced disappearance, and ignoring of his statements before the various prosecutions that he appeared before, in which he admitted that he had been subjected to incidents of arrest and detention outside the law, as well as the absence of the role of the prosecution in inspecting places of detention and monitoring the implementation of its decisions and court rulings, which explicitly gave the green light to the continuation of those violations that he was subjected to more than once.