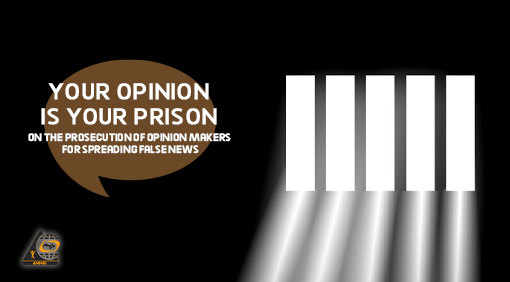 Accusing the crime of joining or belonging to a terrorist group, banned or formed in violation of the law, and the crime of spreading false news that could harm the state of peace and public security, have become the two most common crimes used by the Public Prosecution in recent years, as a justification for punishing opinion-holders not only with pretrial detention, but prolonged pretrial detention, then rotation to circumvent the maximum pretrial detention article.

Just as the prosecution “refuses or fails” to mention the terrorist or banned group to which leftist, nationalist or liberal defendants belong, it also promotes the accusation of “spreading false news or rumors” to imprison those of dissenting opinion, often without mentioning what this news or rumor is!

And you can confidently declare that there is no news or rumor spread by this accused, rather it is an oppositional or critical opinion, which s/he often wrote on Facebook, or through an article or a television interview.

And because the right to freedom of expression has become detested, for which all those who practice it are crushed and punished, and of course the prosecution or the Interior Ministry will not announce that the accused is punished for her/his opinion or criticism, as this breaks the false image that the Egyptian government draws for itself, and there is no system that declares that it is hostile to freedom of expression, so the accusation of spreading false or false news was the fate of most of those with critical or out-of-the-ordinary opinion.

Aim of the paper

This paper aims to present examples of opinion-holders who have been imprisoned because of their opinions that the authorities in Egypt are not satisfied with.

The opinion holder is accused of a different accusation, which is spreading false news or rumors, whether the opinion is expressed through a newspaper, a program, or even Facebook. The detention of the holder of an opposition opinion may reach up to more than two years, which turns the pretrial detention into a penalty. Spreading false news and rumors is considered by law as a punishable crime, as Article 188 of the Penal Code specified the penalty, which is imprisonment and a fine that may reach 20,000 pounds. Nonetheless, the security services and judicial authorities use confusion between opinion and news to pursue opinion-holders and peaceful opponents.

First: The distinction between opinion, news, and rumor:

According to Egyptian law and constitution, it is false news and rumors that are punishable, not opinion.

This is according to the law, but on the ground, the matter is different, as the person with an opinion, criticizing, contradicting, or explaining something other than the interpretation promoted by the authorities is often punished.

Second: Examples of cases in which opinion-holders were arrested and accused of publishing false news and statements:

Researcher and MA student in Anthropology at Central Euro University in Vienna, he was arbitrarily accused of trumped-up charges related to terrorism, as he was accused, in the first case No. 62 year 2021, of joining a terrorist group, publishing false news and data which may damage security and public order and the use of the “Facebook” account for the purpose of spreading false news. On May 22, the State Security Prosecution began investigating him in a new case No. 774 of 2021, emergency state security misdemeanour, registered to No. 877 of 2021, competence of the Supreme State Security Prosecution which charged the researcher “Ahmed Samir Santawi” of publishing false news from outside the country about the internal conditions that would harm security and public order through a page attributed to him on the social networking site “Facebook”. He denied his connection to this page. The prosecution referred him to the Emergency State Security Misdemeanor Court in New Cairo. The case was discussed in sessions and on June 22, 2021 ruled The New Cairo State Security Misdemeanor Court sentenced him to four years in prison and fined him 500 pounds. It is worth noting that this ruling cannot be appealed under the emergency law.

Blogger and admin of the “Oxygen Egypt” blog. He works as a photojournalist. On September 20, 2019, he published a number of posts on his personal Facebook page. On September 21, 2019, he was arrested from inside the Al-Basateen Police Station, while implementing the precautionary measures imposed against him in Case No. 621 of 2018, State Security. He was taken to an unknown destination and was subjected to enforced disappearance until he appeared inside the Supreme State Security Prosecution on October 8, 2019. He was investigated in Case No. 1356 of 2019 State Security, and was charged with the following charges: participating in a terrorist group in achieving its objectives, publishing and broadcasting false news and statements, and misusing a means of social media. On November 3, 2020, the Giza Criminal Court decided to release the blogger under precautionary measures in Case No. 1356 of 2019, but the decision was not implemented. On November 10, 2020, he appeared before the Supreme State Security Prosecution and investigated in Case No. 855 of 2020, on charges of joining a terrorist group, and the Public Prosecution decided to hold him in pretrial detention and he is still in pretrial detention until now.

She works as a freelance journalist and researcher. On May 20, 2020, the security forces arrested the journalist from her home in Alexandria, and she was taken to an unknown location. On May 30, 2020, she appeared in the Supreme State Security Prosecution and was investigated in Case 535 of 2020, State Security, and she was charged of joining a terrorist group, publishing false news and statements, and misusing a means of social media, on the basis of a number of posts and opinion articles published for her via her personal page on the social networking site “Facebook”. The prosecution decided to remand her in custody pending investigations. On January 17, 2021, the court decided to release her under precautionary measure. She was transferred to Alexandria Security Directorate, she was unlawfully detained until she appeared again before the State Security Prosecution on January 30, 2021 and investigated in Case 65 of 2021 State Security and remanded her in pretrial detention again. She was accused of joining a terrorist group. The journalist was released at the end of August 2021, at the political initiative of political leaders close to the state.

The journalist was arrested from his home on Friday morning, December 18, 2020, by a security force consisting of three officers who seized his identification papers, mobile phones, computers, laptops, data storage devices (HARDs-USBs), a set of papers, personal photos, and some translated articles. . He was then taken to a headquarters of the National Security Agency next to the Giza Security Directorate, where he was interrogated there by National Security officers about his personal life and professional career, in violation of the law.

These are the same questions that were also directed to him on December 20, 2020, after his appearance before the State Security Prosecution, following his investigation and accusation of joining a terrorist group and publishing false news and statements in Case No. 1017 of 2020 Supreme State Security. Most of the questions were about his articles published on the Al-Jazeera news website, where his last article discussed the systematic campaign against the Al-Azhar Foundation and the Sheikh of Al-Azhar, and he is still in pretrial detention until now.

Security forces arrested the journalist writer Abdel Nasser Salama from his home at dawn on July 18, 2021, after he published an article entitled “Do it, President,” in which he demands from President Abdel Fattah El-Sisi to have moral and ethical courage and declare his direct responsibility for the defeat in front of Ethiopia, and forfeiting the historic right of Egypt in the Nile, he concluded the article by asking the president to step down. It has been published on a number of news websites, including the Al Hurrya Post website. He appeared before the Supreme State Security Prosecution on July 19, 2021, and he was investigated and accused of joining a terrorist group with knowledge of its purposes, and committing a financing crime. He was remanded in custody pending investigations and is still in pretrial detention.

A journalist works for Anadol Agency. On May 21, 2021 security forces arrested the journalist from his home and took him to an unknown destination. During the investigation, he was not asked about any specific facts related to any accusation, but was interrogated about the history of his journalistic work and his intellectual opinions published on his personal page on the social networking site “Facebook”. He was subjected to enforced disappearance for 5 days before appearing before the prosecution of the Supreme State on May 26, 2021, and was investigated in Case 238 of 2021 Supreme State Security, on charges of joining a terrorist group and decided to remand him in pretrial detention.

The former diplomat at the Egyptian Embassy in Venezuela, Yahya Zakaria Othman Negm, was arrested on May 29, 2021 from his home in the Zaytoun area and taken to one of the National Security headquarters. He was subjected to enforced disappearance for 4 days until he appeared before the Supreme State Security Prosecution on June 2, 2021. He was investigated in Case No. 915 of 2021 Limiting Security of a Supreme State. After hearing his statements and confronting him with a number of his posts on his personal page on the social networking site Facebook, which included personal opinions, the Prosecution charged him of joining a terrorist group and publishing false news and statements, and he is still in pretrial detention until now.

A professor works at the Faculty of Science, Helwan University, after his release, he was surprised that the university referred him to a disciplinary board for publishing his personal opinions on the social networking site “Facebook”, and he was accused of joining a terrorist group with knowledge of its purposes, according to investigation No. 36 of 2019 member investigations teaching staff.

Third: Judicial rulings clarifying the importance and necessity of freedom of expression for society

Usually, the Prosecution, during its investigation with the defendant who is accused of “spreading false news”, discusses the accusation. The defendant demands to know what the false news attributed to him is. The prosecution usually refuses to announce this news, “and often there is no specific news.” In the few cases in which the  Prosecution mentions to the accused the subject matter of the accusation, the accused clarifies that what he wrote is an opinion or point of view and not news, and that the law does not criminalize opinions, so the Prosecution agrees that opinions are not criminalized, but,,,,

After the “but”, the prosecution lists many of the prohibitions and conditions that the country suffers from and the need to be objective and stay away from “irritating people”!! The situation becomes absurd, and turns into a preaching dialogue in an unequal situation, as it takes place between an accused who receives advice and the prosecution, which makes the decision to deprive him of his freedom or restore it to him, is the one who gives the advice.

Therefore, the law, the constitution and the international conventions that supported and necessitated respect for freedom of expression should be respected, and we should emphasize that the citizen is not obligated to write or express an opinion that the authorities like or dislike, but rather is obligated to respect the law.

Rather, as the judicial rulings mentioned, the space should be given to the plurality and diversity of opinions, especially the opposition. Without opinion and without criticism, society cannot uncover faults or corruption, or develop itself.