Index of Labor and Social Protests during June 2018

Freedom of Expression for Workers and Social Movements Program

Index of Labor and Social Protests during June 2018

In June the Egyptian government has lifted subsidies on petroleum products and increased their prices in accordance with the instructions of the International Monetary Fund (IMF) and set a new tariff for passenger transport, which led to a general feeling of anger expressed by drivers of transportation cars in many governorates, from striking to protesting against the limited value of the increase for them, despite complaints from citizens.

June also witnessed the end of the so-called “trade union elections” after a planned process in which the Egyptian authorities excluded independent unions and independent labor leaders and expressed the demands of workers through police and administrative interventions.

The representation of women was 0% in the presidency of the general syndicates.

June also witnessed Eid al-Fitr holiday and part of the month of Ramadan, which explains the lack of protests compared to previous months.

The program monitored (38 protests) during the month. Among which (20 were labor and professional protests) and (18 were social protests) summarized as follows: 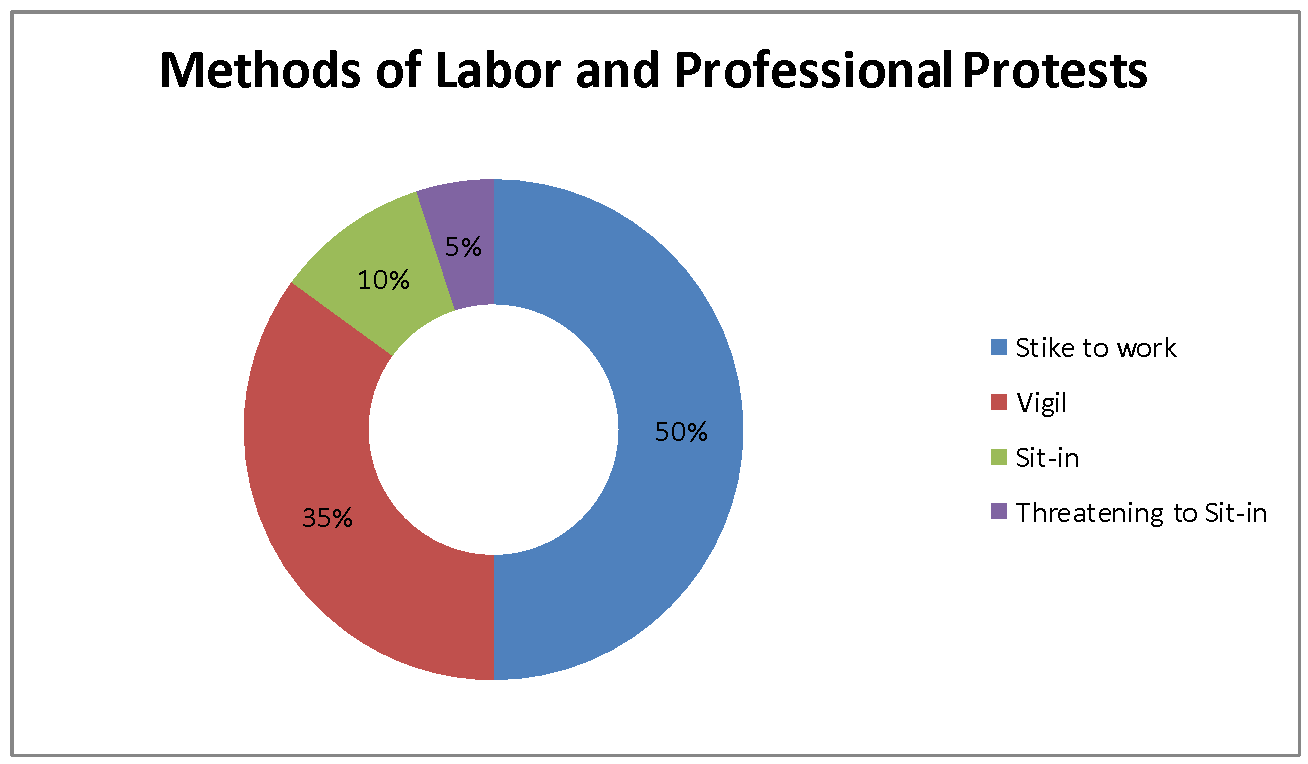 Striking came first in terms of methods to protest for labor and professional protests during June with 10 cases, where:

June witnessed two cases of labor and professional protests where nurse Mohammad Al-Gindi entered a sit-in on June 2nd in objection to discriminating against him by removing the daily entrance and leave checklist from the nurses office.

Also, a big number of employees and workers at Zamalek club organized a sit-in inside the club on June 12th because of the refusal of the Banque Egypte to lift the ban of the club accounts after Mamdouh Abbas had appealed on the sentence issues in favor of the club to lift the ban.

June witnessed one case of threatening to sit-in when the union of workers of those established on private funds at the level of the Republic on June 19th, adopting escalatory steps up to the strike in all government ministries to protest the delay of their salaries for several months, for lack of sufficient to fund.

The program monitored 18 cases of social protests, distributed as follows: 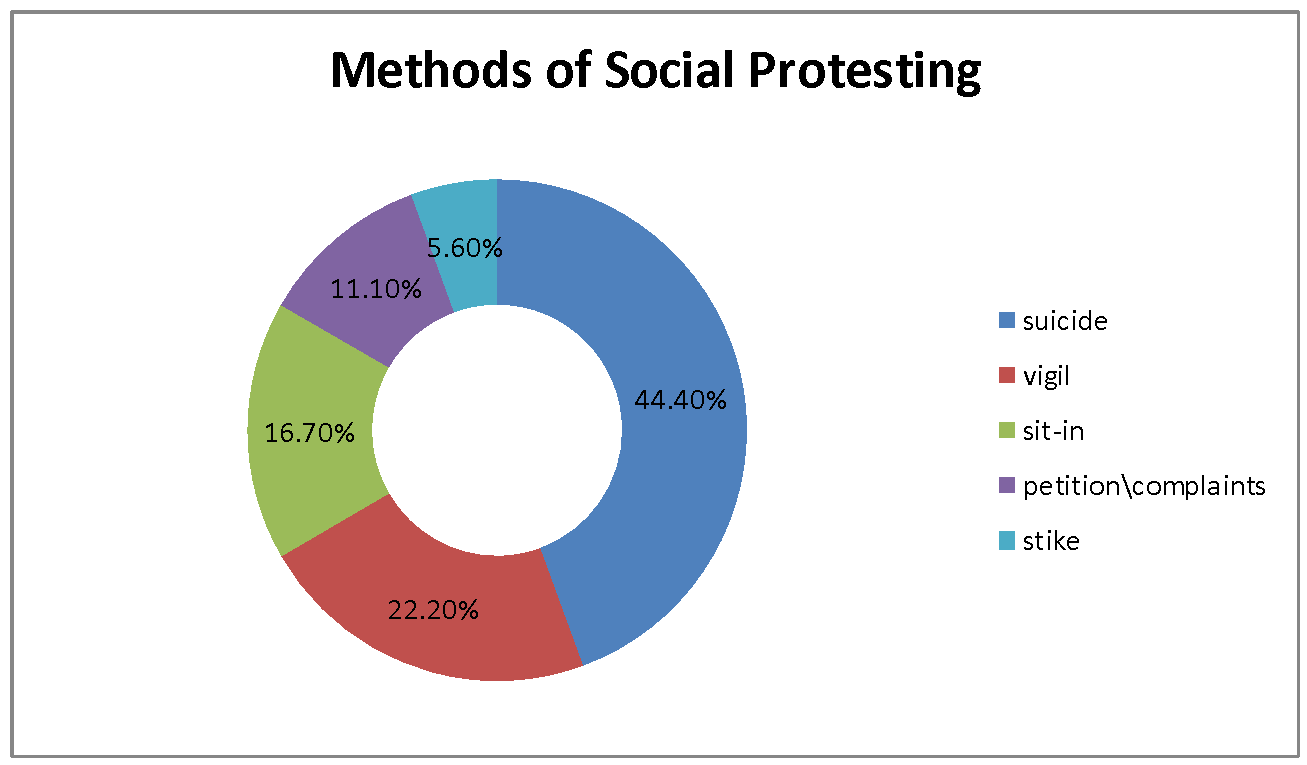 June witnessed 4 vigils that came in second place of protests during the month, where:

The sit-in came in third place with 3 cases, represented in:

The protest by submitting a petition or complaint came in fourth place with 2 petitions or complaints represented in:

The strike in June came in fifth place with 1 strike by a number of bakery owners in the city of Zineya, north of Luxor, on June 27th, following the decision to deduct 60% of their quota. 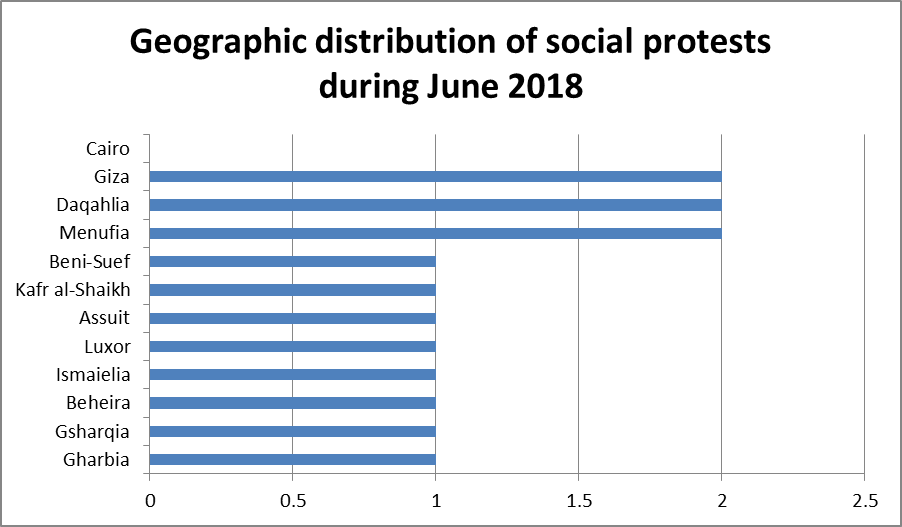 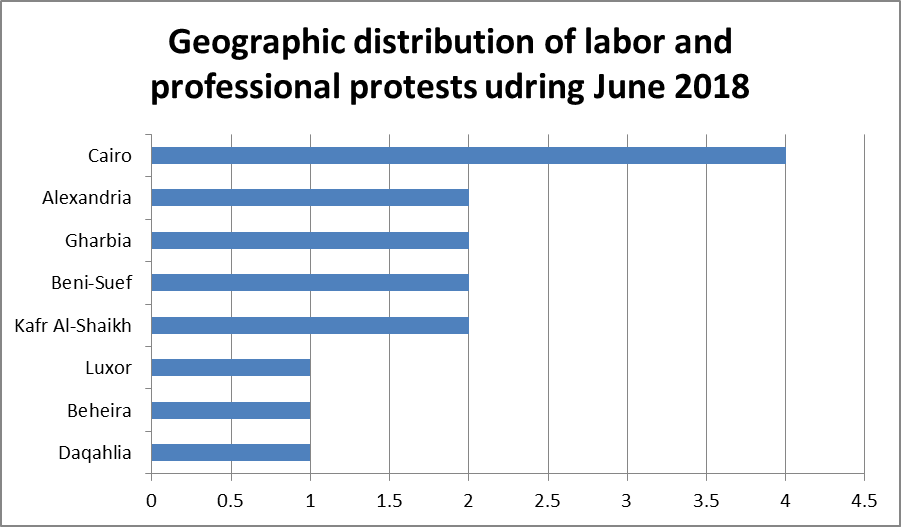 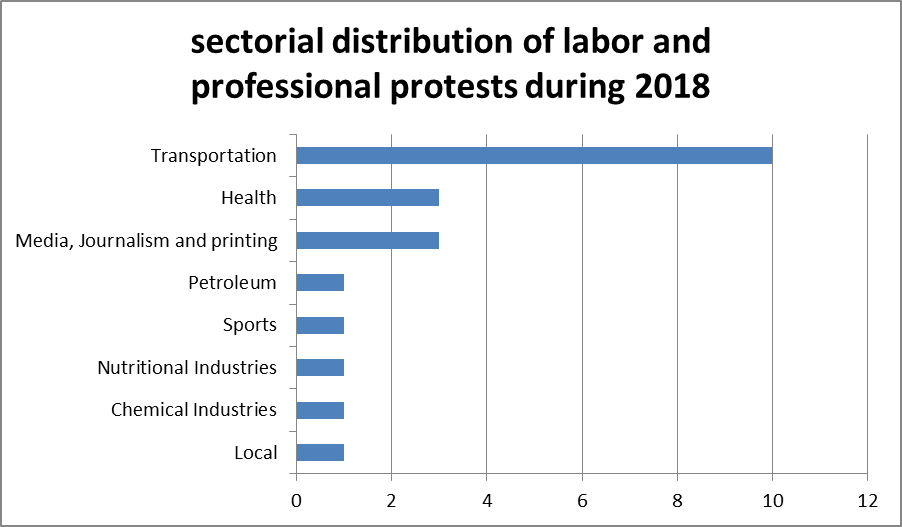 The transportation sector was the most important sector in terms of the number of labor and professional protests during June, with 10 protests.

In second place came the health sector with (3) protests.

In the third place came the media sector, the press, printing and publishing labor protests.

The fourth and last place was occupied by sectors (petroleum, sport, food industries, chemical industries and the local sector) with one protest per sector. 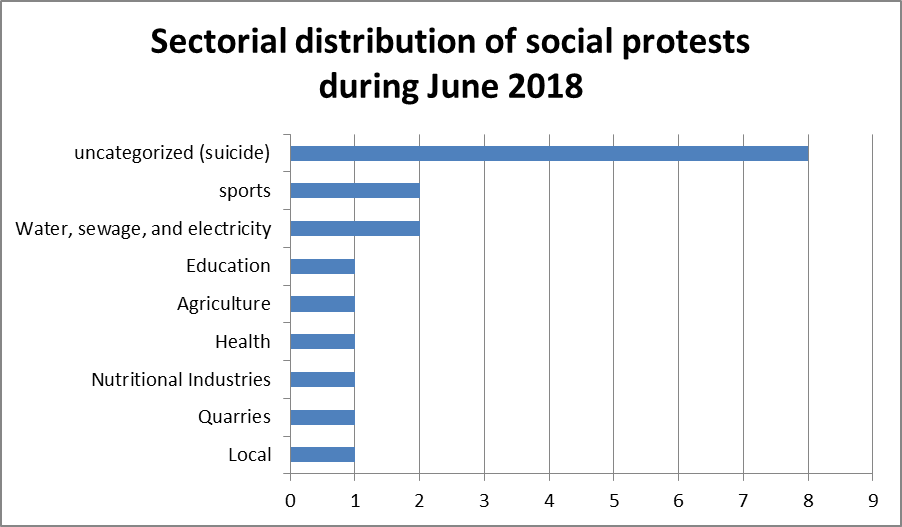 As it has been the case in the recent months, committing suicide for poor living conditions topped all forms of social protests during the month of June with 8 cases of suicide.

The sectors of sports, water, sanitation and electricity came in second place with 2 protests each.

Thus, from the previous presentation, it’s obvious that:

The increase in the prices of petroleum products has angered the users of mass transportation and drove many drivers, especially in Upper Egypt and Delta to strike to work, while the security services and the local administration dealt with those strikes through the use of some buses and services.

Suicide due to poor economic and social conditions is still at the top of the list of protests, and Cairo is still the first province to express its opinion through the various images of the protests.

The report is based on a number of sources: field monitoring of the program of freedom of expression of workers and social movements, labor cases at ANHRI, in addition to several newspapers and websites (Al Watan, Al Masry Al Youm, Al Wafd, Masrawy, Youm7 and others)