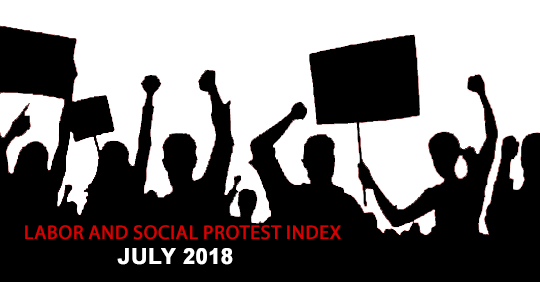 Freedom of expression for social and labor movements program

A state of shock has dominated the Egyptian society during July after a video going viral caught by the surveillance camera in Mary Gerges metro station for a young woman in her 20’s throwing herself in front of the metro train on July 1st, hitting and killing her immediately.

Also at the same day, Ayman E. who is a police cadet from the forces securing Tora, under Cairo security directorate, tried to commit suicide by throwing himself on the same rails at the Shohada metro station, after running into some work and family issues.

The same scene has been repeated several time during this month, as a young man tried to kill himself on July 20th by throwing himself a few meters away from the line-1 metro train while going to Ghamra metro station-Helwan direction, which made the driver use the emmergency breaks, and the police forces came afterwards to pick up the unconscious young man from beneath the train.

Train no. 119 was ambushed while entering Marg Qadima station with a young man throwing himself in front of it on July 22nd which lead to running him over and killing him immediately.

A young man in his 30’s also killed himself by throwing himself in front of the metro train at Orabi station on July 30th.

Such repeated sad incidents are grounds for a social and psychological study to understand what makes young people at the beginning of their lives, kill themselves in such a dramatic way.

Throwing themselves in front of metro stations was not the only method of suicide on the background of poor social and economic situation, as the number of suicide cases has significantly increased, after the shock of the consecutive increases in the prices of petroleum, gas, and electricity, that lead to the increase of prices of all goods and services, which a lot of social sectors are no longer capable of keeping up with, especially while the economic situation has been deteriorating already.

The program monitored 53 protests this month, of which 18 were labor and professional while 35 were social, briefed as follows: 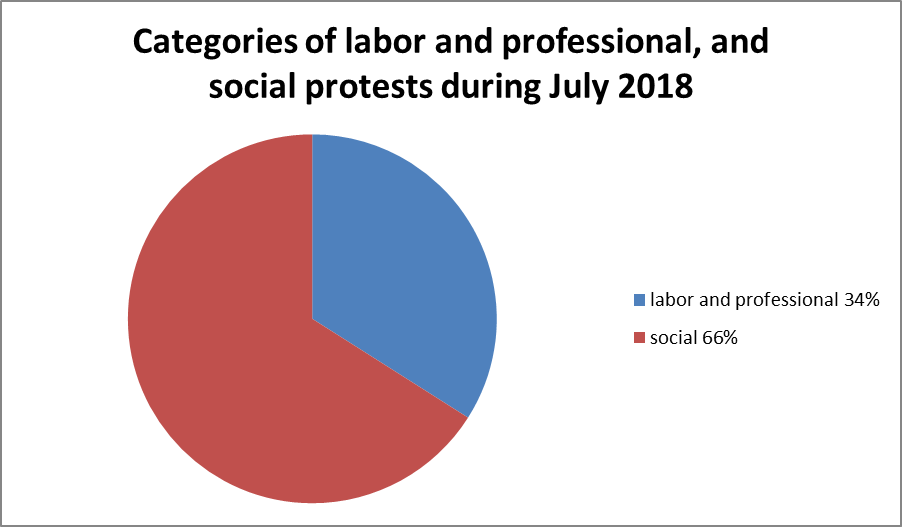 The program monitored 18 labor and professional protests during July, detailed as follows: 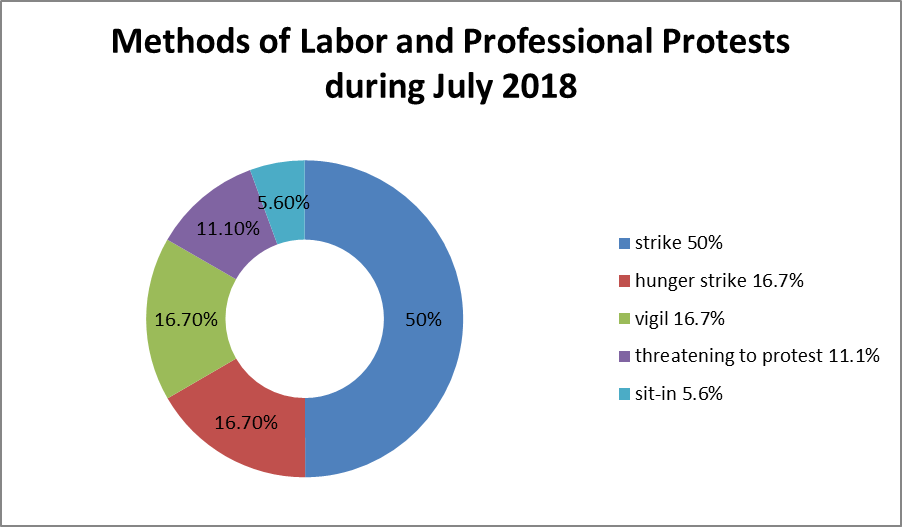 The striking to work came first among all the labor and professional protests in July with 9 cases:

July witnessed one case of sit-in:

A number of journalists in Al-Osbou newspaper, had a sit-in on July 11th demanding the structuring of their wages and providing an environment suitable for work in which the most basic human and professional conditions are met, in addition to their right to promotion.

The program monitored 35 social protests during July, distributed as follows: 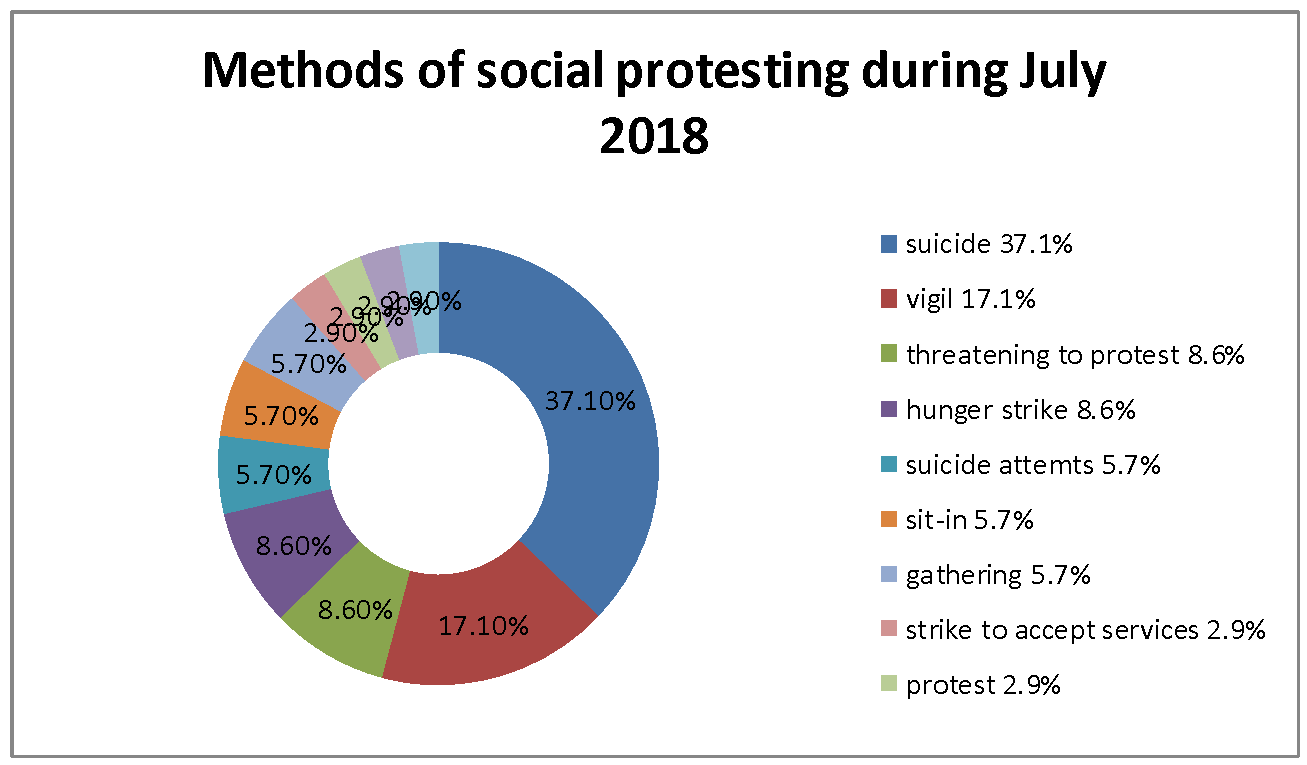 Economic suicide came at the top of the social protests in July with 13 cases that have already occurred, in addition to attempts, summarized in:

Threatening to protest came in third place with 3 cases:

July witnessed one case of a strike on recieving services:

July witnessed one case when:

July witnessed one case when:

This month witnessed one case when:

Cairo governorate topped the labor and professional protests during July with 4 protests, while Daqahlia, Gharbia and Qalubia came second with two protests each. Governorates of Qena, Luxor, Alexandria, Beheira, Giza, Sharqia and Fayoum came in the third place with one protest each.

Cairo also topped the social protests by 9 protests during the month of July, and Daqahlia came  in second by 5 protests, while Menoufia in the third place with 4, Alexandria came in fourth place with 3, Suez, Sharqia and Menia in the fifth place with 2 each, and finally, the governorates of South Sinai, Sohag, Qena, Aswan, Luxor and Qalubia came in the sixth place with one protest each. 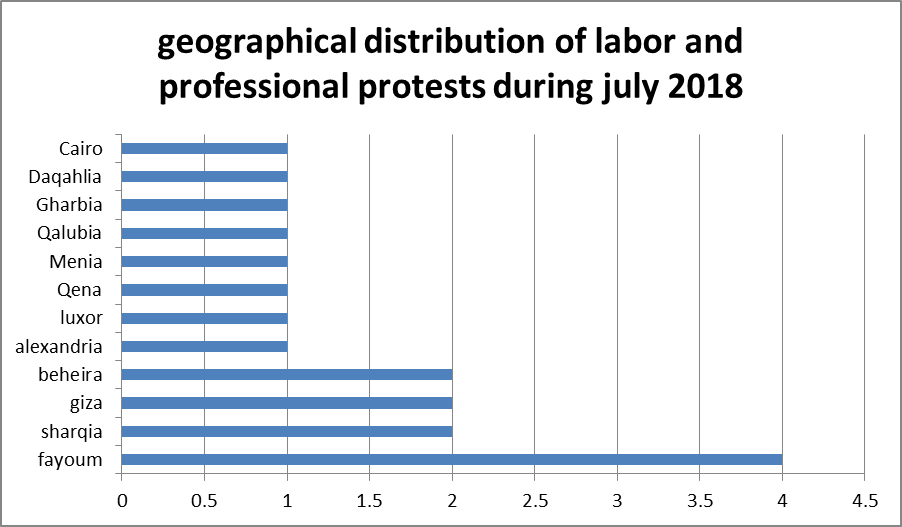 The sector of transport topped in all sectors in terms of the number of labor and professional protests during the month of July by 7 protests.

In the second place came the water, sewage and electricity sector with 4 protests.

In the third place came the media, journalism, printing and publishing sector, and the employees sector with two labor protests.

The fourth and last place was occupied by sectors of agriculture, irrigation, fishing, lawyers, and the metal industry with one protest per sector.

Suicide and attempt to suicide against the backdrop of poor living conditions topped all forms of social protest during the month of July with 15 suicides and attempts of suicide.

The local sector came in second place with 5 protests.

Education and scientific research came in the third place with 4 social protests this month.

In the fifth place came the sectors of sports and security with 2 protests each. 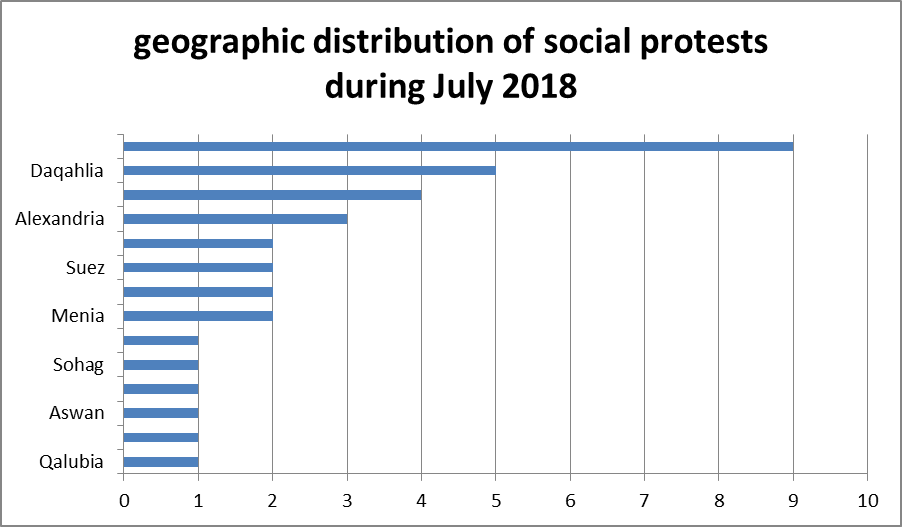 Thus, from the previous presentation, it’s obvious that:

This requires studying the phenomenon of suicide, with all its repercussions and causes, which puts the responsibility on researchers at specialized research centers, sociology professors, civil society organizations and parties to urge the state, its agencies and ministries to address this phenomenon in order to reduce or mitigate it to the least after responding to the legitimate demands of those who commit suicide by reducing unemployment, creating jobs and improving their living conditions.

Program of Freedom of expression of workers and social movements