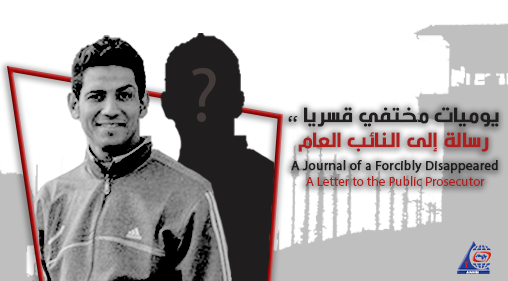 The following “journal” is a message from the prisoner of conscience and the former forced disappeared “Hossam al-Arabi”. We publish it, and we know that national security and the Public Prosecutor will be aware of it.

ANRHI believes that the Public Prosecutor will not remember him, since Hossam Al-Arabi for him is a case among thousands of cases that did not find justice or fairness, a case of a citizen who lost his rights and was deprived of his freedom, by an order from the prosecution, just based on investigations!

The same public prosecutor who knew Hossam was being held illegally, after knowing where he was forcibly disappeared, and did nothing. Hossam al-Arabi was officially imprisoned for 12 months (from January 2017 to mid-December 2017) for a “fabricated political case”. Hossam al-Arabi was under enforced disappearance for 100 days, and was released only at the end of March 2018.

To the Public Prosecutor: This is the title of your justice

Maybe I was dead for one year and four months

On January 25, 2017, I was arrested, and I was taken to the Dar al-Salaam police department, and I had 3 other young individuals with me. We were sitting in a café next to the Dar al-Salam metro station. It was an unparalleled siege as if they were arresting dangerous criminals. After searching my mobile phone they found some posts calling for freedom for the detainees and some of my opinions. My views were not harmful to the state in anything, there was nothing but peaceful criticism in it, and there were no calls for violence, for example, or anything like that.

This nightmare began when I got off the car in which I was arrested, as if I was dead, and with every slap on the backs of my head, it made me feel that these are the last moments in my life! It was like the fists of death hitting me, and when my eyes were blindfolded, I remembered my house, my family and my friends, and everything flashed before my eyes as if it were a movie. I walked in shame towards the officer who asked for my name and age then charged me with several accusations; that I belong to the Muslim Brotherhood and if I told him the truth he would let me go, then he told me that my friends confessed on me, so I must confess. I was weak, so he nailed me and forced me to sign the minutes.

I was at Dar al-Salam police station, in a place called (the refrigerator), which is a place where people are kept until they are brought before the prosecution.

The prosecution accused me of joining a group founded against the law, spreading false news, disturbing public peace, and demonstrating without a license pending case No. 1334 of 2017!

I denied all the accusations, and the lawyers submitted to the investigation a newspaper on January 26 stating that there were no demonstrations in commemoration of the January, a statement from the back-then Minister of the Interior published in the newspapers, and yet I was detained.

After several detention renewals, I was transferred to Tora Investigation Prison

It was difficult days, starting from entering, I was stripped of my clothes, my hair was shaved, and I was taken to rooms called the newcomers, and then I was placed in the political detainees ward no. (3) after ten days.

After that, I entered into a cycle of detention renewal for 45 days

Each time, I was brought before different judges in different circuits, including terrorism.

I was taken to disciplinary cells more than once, and my hair was shaved, and some informants beat me up.

With the renewal going on, I was overwhelmed and my friends and I went into hunger strike.

I survived several suicide attempts because I was feeling desperate to leave this place. I felt disappointed and helpless, especially from the stories of my friends and some of those I met in prison. Some of them were executed, and those who were sentenced to life imprisonment and other stories that negatively affected my determination, my mind and my body, and I used to say why is all this happening to me? Even though I was never a criminal and I did not break the law?

The period of enforced disappearance

I was taken to Dar el-Salaam police station, but my colleagues and I were not released, and we were afraid we might get recycled into a new case. We were sitting in a room of approximately 12 meters in which there was one bathroom and about forty detainees and forcibly disappeared individuals from different departments, they brought them to this place to be rotated in new cases.

We took turns to sleep, ate only bread, and sometimes the detainees who were visited by their relatives gave us some food. The moment of horror was when someone came saying that he was an officer in the National Security. He took four adolescents whose age was less than 15 years old. They were accused of terrorism, and the court acquitted them, and they were waiting for the National Security signal like us. The officer had new clothes and a gel for hairdressing, and he took the young men, cleaned them, dressed them and combed their hair and listed them in a new case!

This happened with several other people from different departments, and I,  we have all had enough inside the room, I specifically hung myself in a noose and screamed loudly after the detectives came down to us and hit the elderly, because we objected to the over crowding in the room.

They were shocked when I tried to hang myself, so they took us to Al-Basateen police station, and I do not remember how many days we have lived between moving from one station to another after the lawyers submitted several reports stating our disappearance.

One day it was a very terrifying day, a person from the National Security came and bound us all, blindfolded us, and said to us, (We will liquidate you), he put us in the car, and got off to a place, and there were soldiers walking behind us with rifles poking us with the barrel of the rifle, and we prayed to God to take our lives without pain.

We were surprised that we went back to the Dar al-Salaam police station again, and when our eyes were opened, the officers laughed in our eyes, mocking us, and we cried after we felt that we lost our lives and regained it, so we entered a room and after four months we were released, yet we are no longer as we were before. For about 100 days of enforced disappearance, it will change you and it is difficult to be back as you were before.

I think that that period of is impossible to forget, it does not go away from your memory, no sense of time, you cannot know what time it is?

I don’t know is it night or day?

I don’t know are we going to live or die?

Are we rotated in a new case?

It is a fear and panic that eats out the souls of the forcibly disappeared, young and old, we are in a cemetery-like room of about 4 m by 6 m in which there is only one toilet and more than forty people taking turns!

They take turns to sleep, exchange frightening conversations, how they were arrested, how they were with their children, and now they do not exist, they wish to go out to their families, some of them are patients with chronic illnesses who need medicine, and some of them only dream of sleeping on a bed or even in a single room, and some of them want to see their mothers because they are her only children.

Scenes that go through my mind, they were not cinematic scenes, but a bitter reality that some people live in. They already existed and became

forcibly disappeared, and now they just do not exist, for days, weeks and months. A very dangerous feeling that you do not exist, the authorities deny your existence !!

Nobody knows whether you are alive or not, and you don’t know what will happen to you!

Are you going to your university again? Will you see your brothers and sisters, your mother, your father, your friends, your neighbors, the street? Is this a nightmare? Well, if I die, what do they do to my body? I was thinking that even if I was rotated in a new case, this is might be a  wish just to be able to see the light.

I am now silent, I remember and suffer while I do not know why all this injustice?

Details of Hussam’s case in a previous report by the Arabic Network, entitled “The Signal is above the Law.”