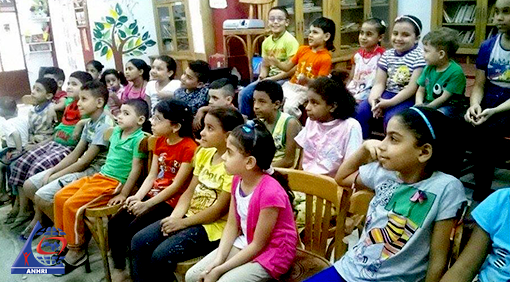 The Arabic Network for Human Rights Information (ANHRI) said today that it has been four years since the closure of the six Al-Karama Public Libraries, which were established by human rights lawyer Gamal Eid with the funds he received from the Human Dignity Award that were shutdown by the National Security Agency personnel in a police and retaliatory manner, after they lied and misled President al-Sisi claiming that the libraries’ closure was in implementation of a judicial order.

On the first of December 2016, security forces raided “Khatwa” Library at Dar al-Salam district and “Al-Karama” Library at Tora neighborhood, which are both affiliated with Al-Karama Public Libraries established by rights lawyer Gamal Eid in Egypt’s slums and poor neighborhoods with the funds he received from Germany’s Defender of Human Dignity Award in 2011. Police crackdowns consequently continued to close the rest of the six libraries established in various locations of Egypt’s poor districts. The matter reached the extent that the police brigade who broke into “Khatwa” Library at Dar al-Salam kicked out 20 children who were playing music in the library before he sealed it with red wax!

ANHRI tried, to no avail, to inform the security services that these public libraries were built to serve the people, youth, and children of poor neighborhoods who are deprived of the most basic services, especially the educational and cultural ones, and that they have nothing to do with the hostility between ANHRI’s director Gamal Eid and the security apparatus. But the National Security kept silent because it was obsessed with the desire for revenge and retaliation, and all six libraries were consecutively shutdown as a result.

Although Eid resorted to al-Sisi calling on him to put an end to the National Security’s practices and reopen the libraries, the President replied: ” You have every right to resort to legal procedures to reopen the libraries upon the court’s ruling,” adding that “No one can interfere in judicial orders”. https://www.youtube.com/watch?v=bYT4FEa_x2Y&t=11s

Eid, consequently, clarified, more than once, that there is no legal procedures or case in connection with the closure, asserting the libraries were unlawfully closed in a police raid and without a judicial order. But to no avail. It has been four years and Al-Karama Public Libraries are still closed!! Hence, we are asking President al-Sisi:

They misled you, Mr. President, and lied to you. Will you punish them then? Will you keep silent on depriving around 260,000 people who benefited from the cultural, educational and artistic services that Al-Karama Public Libraries were providing?

We were not surprised that Egypt’s former nominee for UNESCO Moshira Khattab, who is one of the figures of Mubarak regime that was toppled by January Revolution, is complicit in the libraries’ closure; when she claimed that it was carried out as part of legal procedures, despite the fact that she visited the libraries and knew that they were actually closed as a police measure. So, will the President tolerate being misled or misinformed by the security services and turn blind eye to tens of thousands of poor citizens being deprived of the educational and cultural services, which the Karama libraries used to provide and which he, himself, constitute part of human rights along with the political rights?

It is noteworthy that not only many citizens, writers and intellectuals were enthusiastic about Al-Karama libraries project, but also they adopted the idea; as donations poured into the libraries from every direction and the libraries became  six instead of three. The Karama Libraries received more than 10,00 books as gifts and donations, not to mention the stationary sent to boost the project, especially that Libraries were keen on being independent by avoiding any political, religious and partisan activity. However, they weren’t spared police retaliation and were unlawfully closed, to the extent that some policemen who were carrying out the raids on the libraries were really sad after they were shutdown as their children benefited from it, but they couldn’t express their rejection towards the raid which is part of the National Security measures in Egypt.

“We never have nor ever will lose hope in reopening Al-Karama Libraries. It was one of the most important popular initiatives and a beam of light in a dark reality. Egypt is not destined to live in the darkness of oppression, tyranny and ignorance. Sooner or later, the libraries will reopen”, said rights lawyer and founder of Al-Karama Library Gamal Eid.

About Al-Karama Libraries and the details of their closure:

The story of Al-Karama Libraries

Closure of Al-Karama library is state’s retaliation against my political views: Gamal Eid