After 10 months in prison, human rights lawyer Amr Imam recycled in a new case… Retaliation against HRDs by intimidating them over politicized cases has become systematic in Egypt 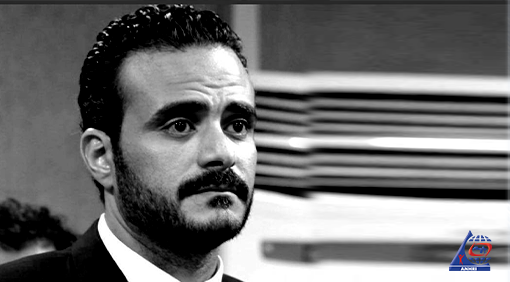 Cairo: 27 August 2020
The Arabic Network for Human Rights Information (ANHRI) expressed today its most absolute condemnation and rejection of the decision issued against its detained lawyer Amr Imam; being added to a new fabricated case in which he was interrogated over charges that are based on a trumped-up investigative report conducted by the National Security Agency, which usually fabricate charges against prisoner of conscience in Egypt. The report alleges that Amr Imam has met with a number of members of a terrorist group during the permitted exercise hours in his prison and has received money from them with the aim to financially supply other members outside prison to commit terrorist crimes.
ANHRI said that its lawyer Amr Imam was arrested in mid-October 2019 and had been interrogated and held in remand detention pending Case No. 488 of 2019 State Security Investigation, after he played a prominent role in defending the citizens arrested over what is known as “20 September incidents” took place in 2019. This case was consequently fabricated against Imam in retaliation for his vital role in defending the victims of “September incidents” case and as punishment for his work as a human rights lawyer working for the Arabic Network.
ANHRI asserted that Imam has been recycled and added to a new case, No. 855 of 2020 State Security, in which the Prosecution charged him with joining a terrorist group and providing financial support and supplies to it, with the aim to commit a terrorist crime. The Prosecution, however, didn’t mention or clarify what the terrorist group is and how Imam is providing funding support to it!
Although there is no evidence that might prove such allegations and accusations which human rights defender Amr Imam totally denied when he appeared before the prosecutor, the State Security Prosecution decided to hold him in detention without any legal support or fact, as is the case with hundreds or thousands of people being held in pretrial detention.
Additionally, Imam said in the investigation session that he had been held in solitary confinement at Tora Prison (Agriculture Ward) pending Case No. 488 of 2019 State Security since 17 October 2019, after was arrested from Al-Maadi district on 15 October 2019. He also clarified that his arrest came after a verbal altercation that occurred between him and a police officer inside the South Cairo Courts Complex in Zeinhom region, where he was performing his duty in defending those arrested over September 20 incidents. He stated that the State Security Prosecution had accused him of joining a terrorist group and publishing false news and statements.
Amr Imam has requested from the investigator the following:
– Identify the terrorist group and the people with whom he met inside his prison, and clarify how he obtained the money from them, how he kept it inside his prison, and how he sent it outside prison, in light of the suspension of prisons’ visits and sessions and the on-paper detention renewal for more than 4 months as part of the state’s precautionary measures to face the coronavirus (COVID-19) outbreak!
ANHRI said: “The Public Prosecutor, in his capacity, has to instruct, pursuant to the law, the heads the State Security Prosecutions, to confront the National Security officers misleading the Prosecution with fabricated investigative records and reports that claim the lives of many innocent people. The Public Prosecutor must also put an end to the policy of impunity and the phenomenon of recycling of detainees adding them to new cases, as happened with many of those who have received release orders in recent period, including: activist Radwa Mohamed Farid and Aml Abdel-Wahab, who are being held in pretrial detention pending Case No. 488 of 2019. ANHRI also calls for implementing the Court of Cassation’s rules which stipulate that investigative reports are merely unsubstantiated statements and cannot be the base over which one is sent to prison.
It is noteworthy that interrogating Amr Imam in a new case over false and trumped-up accusations and after detaining him for 10 months in another politicized and retaliatory case came one day after a politicized verdict issued in-absentia against human rights defender Bahey El Din Hassan; as he has been sentenced to 15 years in prison as punishment for the critical tweets he posted to his account on Twitter, a matter which demonstrates the state’s political will to retaliate and crack down on Egyptian human rights defenders and critics whether in Egypt or abroad.