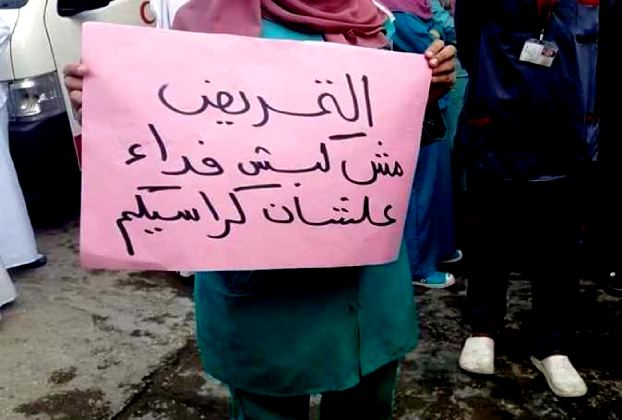 The protests took place during the reporting period were not confined to factory workers, home delivery workers or nurses, but they extended to include Chalets’ owners at Marina in Egypt’s North Coast and “Mountain View Hyde Park” compound. On the 2nd of August, a number of chalet owners in Marina El Alamein staged a protest vigil to object to the poor services, the Tourist Villages Authority canceling the homeowners association and the arbitrary dismissal of its members representing Marina Owners by Al-Taameer Company’s board of directors. Also, on 15 August, dozens of residents of “Mountain View Hyde Park”, owned by “Mountain View” company, organized a protest to denounce the company’s failure to abide by the contract signed with them.

Protests came at the forefront of the protest methods during the reporting period with five protests, followed by “threatening to protest, submitting petitions or complaints) in the second place with two cases each, while “sit-ins” came third with only one case.

The most important protests:

Cairo governorate topped all the governorates with three protests, while Menoufia governorate came second with 2 protests that took place during the reporting period, followed by the following governorates: Giza, Kafr El Sheikh, Marsa Matrouh, Sharqyia, and Gharbia, with one protest each.

The protests took place during the reporting period were concentrated in the “contracting and building materials,” sector, followed by the “transport and communications” sector by two cases,  then came the sectors of (construction and timber industry, education and scientific research, health, spinning and weaving, and metallurgical and engineering industries) with one protest each.