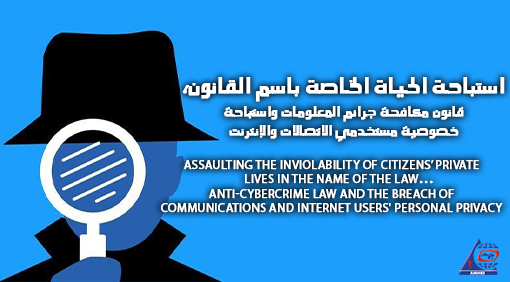 The conceptual definitions of individual freedoms and rights were historically established to confront the state’s encroachment on citizens’ rights and freedoms. Consequently, the concept that citizens are entitled to enjoy non-derogable rights has emerged after a long battle to curtail the state’s unlimited powers.

Personal space, which is bounded by the walls of every person’s home and extends in particular to his personal communication with others, has been the focus of the various legislations and laws that sought to protect citizens from any interference in their personal lives. Such laws have been subject to amendments all along; owing to the massive breakthrough that personal data storage technologies have undergone. This development is always accompanied with a greater risk of exposing such data and communication to violation by external bodies on top of which state authorities.

In light of the substantial development of electronic means of communication especially the Internet and its various applications that are no longer limited to personal computers, but expanded to include smartphones, which allow us to save or store most of our data electronically and to exchange it with different people and destinations all the time using network connectivity, it has become necessary to protect our privacy in order to preserve this amount of data and communications which may be used to harm us in one way or another. On the other hand, state bodies may resort, under certain circumstances, to access personal data and correspondence to collect evidence that will help in convicting the perpetrators of various crimes or in disclosing plans for criminal acts targeting national security, especially terrorist crimes. Therefore, enacting laws that protect the privacy of saving data and private correspondence should take into account the cases in which the security services can access such data, as well as the safeguards that would prevent- under judicial orders- any violation of the inviolability of such personal information and communications of citizens, and hence endangering their security and safety.

This paper briefly outlines the articles of Law No. 175 of 2018 Regarding Anti-Cyber and Information Technology Crimes; related to the protection of citizens’ personal data and communications by enabling the security services- or what the law called ‘the national security agencies’- to have access to this information.

The paper aims to:

1- Informing citizens how this law provides for the protection of their personal data.

2- Indicating the extent to which this law ensures the requisite balance between     requirements of public interest and the protection of citizens’ right to privacy and the consequent protection of their security and safety.

The legal and constitutional framework:

The Universal Declaration of Human Rights states that “Everyone has the right to life, liberty and security of person and that no one shall be subjected to arbitrary interference with his privacy, family, home or correspondence”. It also provides that “Everyone has the right to the protection of the law against such interference or attacks”, while recognizing the right to a social and international order in which the rights and freedoms set forth in this Declaration can be fully realized.

Additionally, the International Covenant on Civil and Political Rights, which has entered into force in Egypt since 1981, confirms- in Article 17 thereof- the inadmissibility of interference neither in one’s private life nor in the affairs of his family, home, and correspondence.

Article (17) of the International Covenant on Civil and Political Rights states that:

Also, the Egyptian Constitution provides for the inviolability of private life, postal, telegraphic and electronic correspondences, telephone calls, and other means of communication, and prohibits confiscating, revealing or monitoring them except by virtue of a reasoned judicial order, for a definite period, and in cases specified by Law (Articles 57 and 58).

The Constitution also states that every person has the right to a secure life and that the state shall provide security and reassurance for citizens, and all those residing within its territory.

Article (2) of the Law No. 175/2018 Regarding Anti-Cyber and Information Technology Crimes requires “service providers”, i.e. telecommunications/internet companies, to do the following:

1- Retain and store the information system data or any other means of information technology for a default period of 180 days. This data includes the following:

This article violates citizens’ right to privacy for the following reasons:

Second: The powers granted to the national security agencies

Although the law obligates telecommunications and internet companies (service providers) to maintain the privacy and confidentiality of the data being stored by forcing them not to reveal it except by virtue of a reasoned judicial order, the Cybercrime Law grants the “national security” agencies- which it defines as: the presidency of the republic, the Ministry of Defense, the Ministry of Interior, the General Intelligence Service, the Administrative Control Authority (ACA)- the right to benefit from this reasoned judicial order in the following way:

– The competent authorities may access, seize, attach, or trace information, data, or information systems in any medium or electronic program or computer.

– They may search and access the computer’s programs databases and other information system as part of the powers granted to them to achieve their goal.

The aforementioned articles are fundamentally flawed due to the following reasons:

The law makes service providers be held criminally responsible in the following cases: when any of them refrained from turning over their data or information, or letting the national security services seize, attach, or trace information, data, or information systems in any medium or electronic program or computer, or search and access the computer’s programs databases and other information systems. Service providers hence will be punished by imprisonment for a period of no less than six months and a fine of no less than EGP 20,000 and no more than EGP 100,000, or either of these two penalties.

The Law No. 175 of 2018 utterly disregards the constitutional and human rights guarantees of privacy and the inviolability of private life. In practice, it renders the electronic data of users of the Internet and communication services completely available and accessible for national security agencies, under no judicial control or clear regulation, and without providing genuine means of grievance to avoid the harm resulting from such violation of privacy or even providing a compensation for the harm if it occurs.

Therefore, this paper recommends amending Law 175 of 2018 so that its articles would fully comply with the Egyptian Constitution and the international human rights charters and covenants that Egypt ratified. The amendments should include the following:

1- Not to oblige or allow service providers to keep or store data that goes beyond that needed for performing their duties and for the period necessary for them to carry out their job. In other words, the law should explicitly determine the sort of data that is needed to be examined or disclosed, and confine the need to disclose the data to judicial authorities only, while arranging penalties in case the service provider retains data that violates the consent that it obtained from its users.

2- In case investigations into a specific crime necessitate having access to the data of a user of telecommunications and Internet services, or to retain the data for a specific period, the law should stipulate that regulations under which such a request can be met when submitting it to an independent judicial authority. Such regulations can include: mentioning the person (s) whose data is required to be accessed and the reasons that would justify this request, in addition to identifying the sort of data that is required to be accessed or disclosed, and in case the request is related to storing the data for a specific period of time (which is analogous to placing a person under police surveillance), it is required to determine this period and the reasons behind the request to store the data.

3- The law should not stipulate that service providers are required to grant any governmental or non-governmental entity full access to its information systems, under any circumstance. This can rather be limited to the data that is specified by a reasoned judicial order and for a specific period of time.