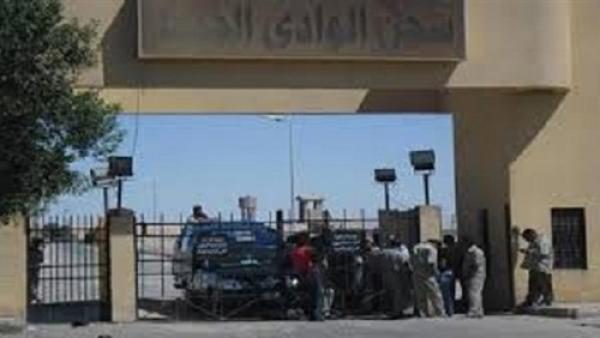 Al Wadi Al Gadid (the New Valley) prison is known for serveral names (the exile, the oasis, Maharik (the burned), Toker). It is one of the oldest and most famous prisons in Egypt. It is located in the western desert, in Al Kharga city, close to Al Sherka village in the New Valley governorate. 630 km away from Cairo.

The prison currently includes 216 cells divided into 12 wards. 11 wards are dedicated to political opponents and ward for criminals. Each ward includes 18 cells with H shape. Each cell is of space 24 square meters and with high 4 meters. The walls, grounds and ceilings are made of reinforced concrete.

Inside each cell there is a bathroom of 1 square meter, five windows of length and hight: 60 x 40 cm, and it is away from the ground with hight 3 meters. The windows do not allow sunlight or fresh air as they all overlook the inner skylights which include sewage pipes.

The prison capacity is about 2,000 prisoners, with 10 prisoners in one cell, but with the overcrowding, the Arab network, cannot determine the number of prisoners currently held in it,.

History of the Prison and the Most Important Prisoners:

The Egyptian authorities in the era of Abdel Nasser chose this region in Western Sahara, which is extremely hot in summer, and very cold winter, to be an exile for political opponents, especially communists and Muslim Brotherhood group, who were sentenced by military courts in the 1950s. The families of the detainees called the prison “Tocker” because they considered those who went missing and who were released as if they are new born, at the beginning of the 1990s a decision was issued to restore the prison so that no one could think that the state was establishing new prisons.

One of the most famous prisoners in Al-Wadi Al-Gadid Prison (the Old oasis), the great writer, Sonallah Ibrahim, who spent five years of his life from 1959 to 1964, in Al-Wahat Prison, where “Sonallah” was detained in the prison in the context of a campaign launched by the late President Gamal Abdel Nasser against leftists; despite the communists’ support for the July Revolution and its leader. But this did not benefit them, because they were required to reverse their positions and to solve their organizational framework. .

Sonallah thinks that the five years he spent in Wahat prison turned him into a peculiar novelist, as he narrated his and his comrades experience in his book “Wahat Dairy”. It is considered one of the  prison literature which was leaked by Hussein Abd Rabbo to whom Sonallah dedicated his book.

Many of them wrote  their autobiography during their detention in this prison, among them: Moein Bessisso.

It is known that Al Wadi Al Gadid prison has kept the lead in slow death. In less than 6 months, 10 prisoners died, end 2014 and beginning 2015, often the cause is one in all deaths occurring weekly, and only 7 days have passed since death occurred in the New Valley Prison. The cause of death is usually declared to be “a severe drop in circulation” or the heat intensity, which is called “thermal stress” by official and semi-official media. According to a report published in the Al Youm Al Sabei, which is close to the government, in August 2015, the effect of the heat in this prison, where the title of the news came “the number of deaths in Al-Wadi Al-Gadid prison rose to 11, including 5 by thermal stress

Other websites published news about prisons death under hot weather.

Human rights defenders assert that the overcrowding inside each cell and the absence of qualified hospitals in the prison to treat medium and severe cases are the causes of death..

Al Wadi Al Gadid prison is considered one of the prisons which the Interior Minister exploits to alienate political opponents coming from Cairo and Alexandria and other governorates. Alienating prisoners is a punishment that was granted to officials by the law of prisons, as the prisoner is transferred from a prison to another in case s/he commits a riot. Alienation to Al Wadi Al Gadid prison is considered fatal for elder people, as they travel for 600 kilo meters at least in a truck that resembles a metal box.

A Letter from A Prisoner in Al Wadi Al Gadid

A political prisoner in Al Wadi Al Gadid has sent a letter narrating the prisoners’ sufferings in this prison saying:

Prisoners in Al Wadi Al Gadid suffer severely under the hardship imposed on them by the administration of the prison. From day one, they are stripped off their cloths and obliged to urinate before the detectives in order to humiliate them. Their hair is shaved with an electric shaver. The shaver is used to shave all prisoners without any consideration for the hygiene, as it may case an infection to the prisoners. They receive neither human nor healthy treatment.

Then, they are searched and all properties of the prisoner are stolen from him.

As the prisoners are received at the prison gate, a whole journey of insults, humiliation and curses is perpetuated by detectives under the leadership of the inhuman officer “….” and other informant officers who enjoy insulting and humiliating political prisoners.”

All prisoners are gathered, political and criminals, they are called “the comers”. They are overcrowded in inhuman cells in ward 8, as a cell may include 24 political and criminal prisoners. This situation continues until the distribution of the prisoners to their main wards days after their reception, it may takes 20 days. After prisoners get out of the comers ward they are searched before confining them into their main wards, cloths and blankets are stolen from them. A ticket is formed for each prisoner in which his name, date of detention, date of release and accusations are written.

He asserted that Al Wadi Al Gadid prison is the only prison that treat political prisoners like criminal ones. They are distributed to main wards to spend their sentence with prisoners condemned with murder, murder attempt, weapon acquisition so that the political prisoner is lonely in a cell of 24 prisoners among criminals. He continues:

The political prisoner suffers from these cells specially with the phenomenon of smoking among prisoners, the plaguing of skin diseases, mostly scabies disease which is the main disease which any prisoner in Al Wadi Al Gedid is infection with, because of the overcrowding in the cells, not allowing prisoners to get out of the cell except for minutes to walk in the  corridors, absence of health care and staying in the cells for 23 hours a day. In case of the infection, the prisoner is left to die without being transferred to the prison hospital, however, the hospital lacks the least health and medical qualifications.