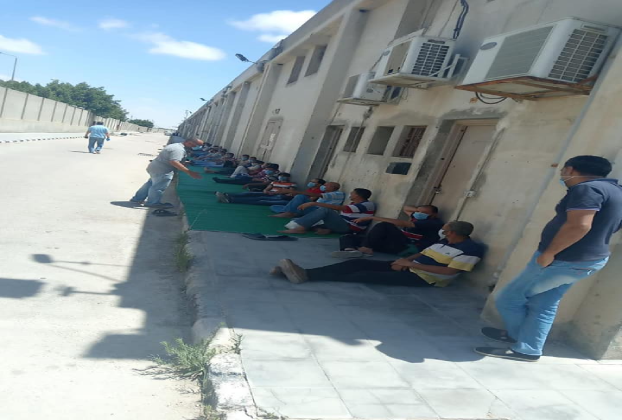 During the period from 1 June to 15 June, ANHRI’s Trade Unions, Labor Protests and Social Movements Monitoring Center monitored 10 protest movements, including 4 labor and professional protests in addition to 6 social protests.

The reporting period witnessed three suicides or attempted suicides, three cases of threatening to protest, and two cases of gathering, in addition to one vigil and one-sit-in.

One of the most important protests took place during this period was an open sit-in organized by 300 workers at Sectore Spinning Group (a textile manufacture) in Alexandria on June 14. They also decided to enter a hunger strike in protest against the company’s decision to reduce their wages to 50% and the administration’s inaction towards their demands.

Two employees also committed suicide to protest favoritism or nepotism in the workplace. On June 5, Mohamed RH, 56, a former employee, committed suicide by hanging himself in the children’s room in his apartment at May 15 district, South Cairo, after he had been in a bad psychological state due to financial constraints while suffering from a brain disease. On June 2, another employee tried to throw himself from the top of a building at the Al-Mubtadaian Street in Al-Sayeda Zainab area in Cairo Governorate, after he had been arbitrarily transferred from his work, but the security forces managed to rescue him and persuade him not to kill himself.

Giza governorate topped all the governorates with three protests, while Cairo came second with two protests, followed by Luxor, Menoufia, Alexandria, and Ghabrbyia governorates with one protest each. On June 9, several governorates witnessed some teachers threatening to stage a protest to denounce their non-receipt of the Thanawyia Amma (High school) recruitment/assignment letters and their poor financial condition, while calling for an increase in their 2020 salaries.

The reporting period witnessed two protests in the Education and Scientific Research sector in addition to various others in the sectors of Textile, Trade and Security, Sports, Housing and government employees.

-The Democratic Path in Egypt during the Second Quarter of 2020