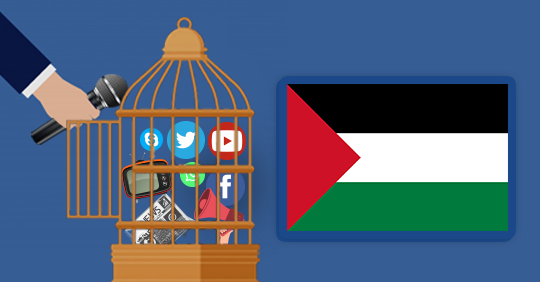 The Palestinians’ exercise of their right to freedom of opinion and expression under occupation has been influenced by manifold internal and external factors, among which are legal, political or economic factors. These factors involve the deteriorating relations between the Israeli occupation authorities and the Palestinian Authority (PA), coupled with the conflict between the Palestinian Authority in the West Bank and Hamas in the Gaza Strip, not to mention the overlapping and multi-pronged pressure whether it is domestic, regional, or international. All these factors affect the structure of media institutions in Palestine and the ability of citizens to exercise their human rights in the public sphere. Both authorities in the West Bank and Gaza seek to silence citizens if they attempt to speak out, complain, or protest against the poor economic conditions they live in. The two authorities that run the country disagreed over the way to confront the Israeli occupation, but they agreed to suppress freedom of expression in Palestine.

As for the external factors that have affected freedom of expression throughout 2019, the Israeli occupation authority adopted a package of laws in 2018 withholding from the tax revenues it transfers to the PA funds equal to the amount allocated by the PA to Palestinian prisoners and families of Palestinians killed in confrontations with Israel.

A few days earlier, the Palestinian Authority was also deprived of the US aid under the “Taylor Force” Act (TFA). The impact of the economic crisis in Palestine was also noticeable in the suspension of the publication of the leading Palestinian newspaper Al-Quds for the first time in 68 years, due to financial reasons.

Due to the suspension of the Palestinian Legislative Council (PLC)’s operations upon a decision by the Constitutional Court (the highest judicial authority) to dissolve the council- elected since 2006 when the Islamic Resistance Movement (Hamas) won a majority of its seats-, the country didn’t witness the enactment of any laws that might restrict the right to freedom of opinion and expression. However, there is still a number of Israeli and Palestinian laws that curb freedom of thought and expression that remain in force, including Decree Law No. 10 of 2018 on Cybercrime.

Second: Violations against freedom of expression

The Israeli occupation authorities, along with the Palestinian Authority in Ramallah and Hamas in Gaza, have all sought to silence citizens and prevent them from voicing their views. This can be evident in many documented incidents; including, but not limited to, the Israeli occupation authorities barring the two US congresswomen Ilhan Omar and Rashida Tlaib from their official visits to Palestine on August 15, after they expressed support for the Boycott, Divestment, and Sanctions (BDS) Movement against Israel and its settlement project in the Palestinian territories calling for boycotting Israeli goods and products.

In another incident, the Israeli forces raided, in the morning of 21 March, the French Cultural Center in the occupied east Jerusalem region to cancel an event organized by the “Jerusalem Girls” Association; under the pretext that it is funded and supervised by the Palestinian Authority (PA). Also, on 22 July, the occupation forces prevented journalists from entering Wadi al-Hummus neighborhood in Sur Baher village, declaring it as a closed military zone.

On the same day (July 22), the Israeli occupation forces detained Nawal Hijazi, “Al Kufiyya” TV reporter, along with the Palestinian Broadcasting Corporation (PBC)’s reporter Rose Al-Zrou, for two hours in a coastal area near Wadi al-Hummus neighborhood in Jerusalem; in order to ban them from covering the demolition of Palestinian buildings and homes.

On 15 January 2019, the authority in Ramallah detained journalists Mu’tasim Saqf Al-Heit and Mohammed Karout Adkaidek, a day later, to prevent them from covering protests rejecting the Social Security Law. Also, Hamas’ attorney general ruled, on 27 May, to ban the distribution of Al-Hayat Al-Jadida newspaper in the Gaza Strip; for allegedly “publishing materials that promote sedition and incitement to attack public property.”

Hamas security forces also attacked, on 14 March, journalist Sami Issa, editorial director of “Al-Hadaf” News website, and confiscated his mobile phone to prevent him from covering the so-called “Down to the High Prices” movement.

Administrative detention is one of the methods used by the authorities in Palestine to suppress dissidents and critics. For example, on 3 March, a huge number of Palestinian intelligence personnel raided the house of journalist Hazem Nasser in the occupied city of Tulkarm before arresting him at dawn.

Fayez Al-Suwaiti, who heads a group called “Hand in Hand toward a Homeland Free of Corruption”, was also detained shortly after he headed to the Public Prosecutor’s Office in the morning of June 9 upon an oral summons. Al-Suwaiti’s arrest came after he accused the head of the PA’s General Authority of Civil Affairs of financial corruption and misuse of power.

In mid-March, the security forces arrested dozens of journalists from separate areas of the Gaza Strip after summoning most of them for investigation over their coverage of the “We Want to Live” popular youth movement.

The Israeli authorities used the judiciary in an attempt to stifle the voices demanding the rights of the Palestinian people. For instance, on 16 April, an Israeli court in the occupied Jerusalem upheld the Israeli government’s order to deport Omar Shakir, director of Human Rights Watch’s office in Palestine, alleging that he is one of those who support the boycott of Israeli settlements.

On Monday, 9 September 2019, poet Widad al-Barghouthi, a lecturer at Bir Zeit University, appeared before the “Ofer” Military Court over charges including “incitement against the occupation by publishing poems on the social networking website Facebook”. The case, however, had been adjourned at the time.

On the other hand, the “Ofer” Military Court sentenced Palestinian writer Israa Lafi- a resident Surif town, northwest of al-Khalil province in the West Bank- to 10 months in prison for her media and public activities supporting the Palestinians’ rights.

On 6 March, Israeli Prime Minister Benjamin Netanyahu signed a decree designating Hamas-controlled “Al-Aqsa” TV station as a “terrorist organization”, after the Israel’s Security Agency, commonly known as “Shabak” or “Shin Bet”, alleged that Hamas “uses the channel to recruit new agents to its ranks through transmitting secret and agreed upon codes”.

The financial crisis suffered by the Palestinian people in the West Bank and Gaza Strip also played a pivotal role in prompting the Hamas mouthpiece “Al-Risala” to announce the suspension of its publication.

The political strife between the Ramallah-based Palestinian Authority and the Hamas Authority in Gaza comes at the expense of press freedom; as it results in imposing further self-censorship on their publications. On 4 January 2019, unknown assailants stormed the headquarters of the Palestinian Authority-run Broadcasting Corporation (PBC) and the official TV at the Tel al-Hawa neighborhood in the southern part of Gaza City, attacked the employees therein, and smashed its equipment and contents before they fled the scene. No one had claimed responsibility for the attack, but Palestinian officials held “Hamas” responsible.

Both the occupation authorities and the Palestinian Authority used pre-censorship to restrict freedom of opinion and expression in Palestine through the raid of printing houses and the confiscation of books before distribution. For example, on 10 July, the Israeli occupation forces stormed “Babylon” Press in the city of Halhul using its military vehicles and confiscated its equipment before fleeing the city at dawn.

Also, on 9 April, the intelligence service of the Ramallah- based Authority stormed the “Al-Hassan” print shop in Betonia, west of Ramallah, before arresting the shop’s owner Muhammad Subhi Abu Tabikh- a detainee in Israeli prisons- and confiscating copies of the book “Dar al-Sadiqeen” (The path of the true believers) under the pretext of “not obtaining a license from the Ministry the culture”.

Hamas-affiliated security forces resorted to violence to disperse a string of large-scale protests organized by hundreds of Palestinians in several areas of the Gaza Strip. The protests, which were staged to denounce the high cost of living, began on 14 March 2019 and lasted for three days. In response, Hamas security forces in Jabalia, northern Gaza, launched an arrest campaign and a series of security raids on the homes of dozens of citizens, including activists, journalists, and human rights workers.

On the other hand, the Israeli occupation forces violently dispersed, on August 11, a sit-in staged by thousands of Palestinian worshipers gathered at the Al-Aqsa Mosque to prevent Israeli settlers from storming the mosque. The occupation forces fired tear gas after the Palestinians performed the prayers of Eid al-Adha leaving many of them injured.

On May 3, the Israeli occupation forces fired live ammunition and rubber-coated metal at a number of protest marches, including an anti-settlement protest in Kafr Qaddum, south of Qalqiliya in the northern West Bank. A Palestinian journalist was also injured in a protest march in Beit Sira village, west of Ramallah.

The occupation authorities fired, on 15 May, live and rubber bullets and tear grenades at the “Great Return” Marches- organized by Palestinians in the Gaza Strip to mark the 71st anniversary of the Nakba Day in 1948, when hundreds of thousands of Palestinians were forced to leave their cities and villages- which resulted in dozens of casualties.

On July 26, the Israeli occupation forces also used violence to disperse a sit-in staged on the sides of the apartheid wall in Wadi al-Hummus neighborhood in Sur Baher village in occupied Jerusalem. As a result, dozens of Palestinians suffocated due to the intense firing of tear gas canisters at the two sides.

The judicial arena has witnessed a number of critical cases that have a profound impact on Palestinian citizens and their right to exercise freedom of opinion and expression. Among these cases is the case of the deportation of Palestinian photojournalist Mustafa Iyad Al-Kharouf, as two Special Human Rights Rapporteurs at the United Nations called on the Israeli authorities to stop their attempts to deport Mustafa and regulate his residency status in Jerusalem. It is noteworthy that Mustafa was born in Algeria to a Palestinian father and an Algerian mother. He was living in occupied Jerusalem with his family when he was arrested by the occupation authorities in January 2019, for allegedly illegally staying in the country.

The second most important case is the case of barring the two US congresswomen Ilhan Omar and Rashida Tlaib from their official visits to Palestine for their support for the Boycott, Divestment, and Sanctions (BDS) Movement against Israel and its settlement project in the Palestinian territories.

Fourth: Most common accusation against freedom of expression