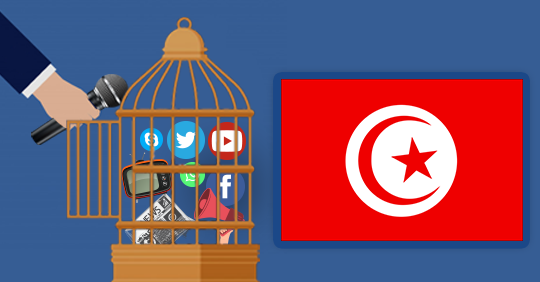 The Tunisian Republic witnessed an exceptional year filled with major political incidents that have affected the state of freedom of expression for several years to come. In 2019, Tunisian citizens participated in two electoral processes; the parliamentary elections, and the presidential elections after the death of President Beji Caid Essebsi on 25 July 2019.

Contrary to many projections, Tunisia’s Independent High Electoral announced, in evening of October 9, that moderate Islamist Ennahda Party won first place in the parliamentary elections that took place on October 6, followed by the Heart of Tunisia Party.

As for the presidential elections, the electoral commission announced, on October 17, that Kais Saied had officially won the presidency in Tunisia in the second round that took place on October 19, beating out his rival business tycoon Nabil Karoui.

Although there had been some violations of freedom of the press and freedom of expression in general during the election process, the year of 2019 will remain a stark reminder of a peaceful transition of power following a successful democratic process.

Regarding press freedom, a number of media outlets’ owners had used their institutions to propagate their political campaigns or to gain support in favor of certain candidates, especially after many of these institutions were closed due to financial difficulties. The crisis had also reached the non-profit broadcasters, known as “community radios” in addition to a number of local radio and TV channels, resulting in a lack of pluralism in the media landscape. (1)

The Tunisian People’s Assembly (Parliament) didn’t pass, during 2019, any laws that are directly related to press freedom, but it indeed discussed several laws that have a major impact on the state of public freedoms. (2)

On 18 January 2019, the Parliament’s Rights and Freedoms Committee began discussing the notorious state of emergency bill submitted by President Béji Caid Essebsi on 30 November 2018 to replace a 1978 presidential decree that is used to impose a continuous state of emergency.

Consequently, the bill had been discussed amending some of its articles until it was adopted on the 3rd of May, but it hadn’t been submitted to the parliament’s plenary session during the year of 2019. (3)

On August 22 of the year, the Tunisian parliament also ratified, in an extraordinary session, the amendments to article 49 of the electoral law, which provides for reducing the constitutional time limits and shortening the appeals period to fall within a period not exceeding the term of the temporary president. (4)

On the other hand, it was announced in November 2019 that an independent and non-profit press council will be established that would provide a system for self-regulation and modification of the media sector to comply with the code of ethics, protect freedom of the press, and defend the right of citizens to obtain qualitative information. The “Press Council” was supposed to kick off in late November 2019.

One of the most cases that influenced freedom of expression in Tunisia in 2019 is the case of the attacks on journalists while covering candidates’ political campaigns in the legislative and presidential elections took place in Tunisia during the year. For example, Dr. Moncef Marzouki attacked journalist Ahmed Qannouni during an interview he conducted with the Tunisian politician. Many media workers and institutions were also accused of being used as a tool for propagating some candidates’ campaigns. Another case that garnered widespread attention and solidarity campaigns on social media is the case where Tunisian blogger Fadhila Belhaj is accused of “insulting an official on the Internet”. The year also witnessed the Tunisian Journalists Syndicate not being invited to the session in which President Kais Saied was sworn in as Tunisia’s new president.

Fourth: Violations of freedom of expression

Many journalists in Tunisia were banned from doing their job and covering events by the executive authorities throughout the year, and in some cases, they faced legal cases for their media coverage. For instance, on the first of March, the Tunisian authorities prevented the Algerian community residing in Tunisia from organizing a demonstration in front of their embassy in al-Beheira region and in front of the municipal theater at Habib Bourguiba Avenue in central Tunis, to protest the candidacy of Algerian President Abdelaziz Bouteflika for a fifth term. The demonstration was banned on the pretext of “not obtaining a prior license.

On March 14, the investigative judge of the Court of First Instance in the capital Tunis ordered the suspension of the “Four Facts” program aired at “Al-Hiwar al Tounsi” TV private channel, after it aired a report tackling the death of 15 infants in a government hospital in Tunis. The court also ruled to suspend another program aired on “Carthage Plus” TV for addressing the same tragic incident.

The ban came on the grounds that what will be broadcast “would harm the integrity of the conduct of the investigation, contradict its confidentiality and disrupt the conduct of justice.”

In a related context, the Ministry of Education Undersecretary in Medenine (southeast of the country) barred journalist Afaf al-Wadrini, a correspondent for “Tunis Arrakmia” newspaper, from carrying out her work covering the protest movement organized by a number of teachers, before he threatened to sue her.

After the January 14 uprising, journalists have become more susceptible to have their work censored by the Tunisian authorities or the management of the institution they work in. On the second of July 2019, a number of journalists at Tunisian News Agency (TAP) staged a sit-in at the agency’s headquarters in protest against what they deemed interference in the editorial policy by the institution’s head and director-general. They also accused the management of being biased in favor of certain entities and denounced the recent dismissal of four journalists after referring them to a disciplinary board.

Verbal and physical violence was used by security forces, election campaign members and unidentified people against journalists to prevent them from covering incidents throughout 2019. For example, in the morning of April 25, the security forces broke into the headquarters of Nessma TV channel in Radas (9 km southeast of the capital), and seized its tools and equipment in implementation of the High Commission for Audiovisual Communications (HICA)’s decision; for allegedly airing the channel without obtaining a legal license and breaching the HICA’s rules.

In another incident, the security forces assaulted, on June 15, journalist Naji al-Khalouli from Al-Kaf Radio office in Beja governorate, while he was covering the anger protests in Beja called by the state labor union. Journalists Afaf al-Wadrini and Naima Khalifeh were also subjected to verbal attacks by security personnel who attempted to prevent them covering a protest organized by a number of asylum-seekers from different African nationalities on the 20th of June 2019.

On the other hand, protesters and postal workers gathering at the headquarters of the Ministry of Communication Technologies and Digital Economy were physically attacked by the security forces on August 21, the third day of their protest sit-in, which prompted a number of post offices in various regions of the Republic to declare a week-long strike.

Furthermore, a number of media workers and journalists were subjected to verbal and physical assault by some political candidates or members of their campaigns. For instance, on September 9, Tunisian Channel 9 reporter Hossam Hamad was verbally insulted and beaten by members of presidential candidate Abdul Karim Al-Zubaidi’s campaign. Also, on September 12, Dr. Moncef Marzouki, candidate of Al Harak party “Tounes Al Irada”, attacked journalist Ahmed Qanouni, while filming a media interview with him. The assault came after the interviewer asked Marzouki about the reason why he changed his stance towards Syria’s President Bahsar al-Assad, which led him to throw the microphone at the journalist and leave the studio right away. The two journalists Saida Traboulsi and Asilah Belghith were also subjected to verbal assault by some supporters of the elected president Kais Saied at Habib Bourguiba Street, on October 13, while covering the celebrations over his victory in the presidential elections.

The Tunisian authorities launched a series of arrest and detention campaigns against journalists throughout 2019. For example, the security forces arrested Moncef Kartas, a member of the UN’s Panel of Experts at the Libya Sanctions Committee, upon his arrival to Tunis on March 26, for allegedly “willfully disclosing security information on counter-terrorism issues using illegal means”. Consequently, on 21 May, the Court of Appeal in Tunis decided to temporarily release Kartas, a dual national of both Germany and Tunisia, allowing him to travel back to Germany. In another incident, the security forces arrested, on August 24, presidential candidate and founder of the local Nessma TV channel Nabil Karoui, in Béja (northwest of Tunisia), pursuant to an arrest warrant issued against him by the court of appeal on a charge of “money laundering”, before he was later released on 9 October 2019.

The Tunisian authorities used prosecution, investigation and trial of journalists as a way to confront what they publish and curb their right to express their opinion, a matter which has raised fear over a serious setback for freedom of expression in the country. On February 16, the Misdemeanor Circuit at the Court of First Instance in Tunis sentenced Fadhila Belhaj to two years in prison on charges including “insulting an official on the Internet” over “Facebook” posts in which she criticizing the Ministry of Interior’s handling of terrorism file. Also, on April 11, the Public Prosecutor of the Court of First Instance in Garmbalia referred Osama Al-Shawali, a journalist at the “Four Facts” Program, along with three employees at the city’s elderly care center, to the misdemeanor circuit as a suspect. Al-Shawali was attacked by the center’s employees on Monday April 8, after he filmed the violations and assaults endured by the elderly in the center. Another journalist, Yathrib al-Mishri, also appeared before the Court of First Instance in Tataouine on Thursday, April 18, over a legal case filed against her by the local union of the National Guard accusing her of “spreading false news” against the backdrop of an investigative report on the smuggling of falcons on the Tunisian-Libyan border. In the same context, media professional Hamza El-Beloumi and journalist Osama El-Shawali were referred again for investigation on October 8, on charges of “insulting the judiciary” after airing a report, on the “Four Fact” TV program, about a judge who was indicted in a bribery scandal.

Fifth: Most accusations against freedom of expression

The Tunisian authorities used a number of allegations to justify violations of freedom of expression, the most common of which are:  Failure to obtain a prior permit, interference in the conduct of justice, violation of laws regulating the audiovisual sector, willful disclosure of security information on counter-terrorism issues using illegal means, money laundering, insulting an official on the Internet, libel and defamation, dissemination of false news, and defaming the judiciary.

The list also included: presidential candidate Leila Al Hamami, the headquarters of Nessma TV channel in Radas, the “Four Facts” TV program, Algerian community residing in Tunisia, in addition to the postal workers who staged a protest at the headquarters of the Ministry of Communication Technologies and Digital Economy.