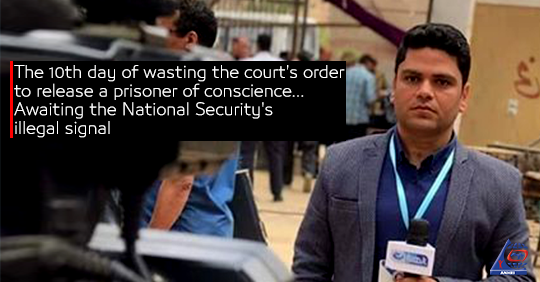 The Arabic Network for Human Rights Information (ANHRI) condemned the continued illegal detention of Al-Nahar TV correspondent Abdel Rahman Yassin by October Police Station security forces for the tenth day in a row, after it was ordered to replace his pre-trial detention pending case No. 1250 of 2019 with a release on probation.

On 4 February 2020, Giza Criminal Court ordered the release of TV reporter Abdel Rahman Yassin with precautionary measures as stipulated in the Criminal Procedure Law. The State Security Prosecution didn’t appeal against the decision, and therefore it deems final and binding. However, the release order still hasn’t been implemented under the pretext that National Security Agency hasn’t yet to approve or command his release despite carrying out all the legal procedures.

The National Security officers have decided to obstruct Abdel Rahman Yassin’s release order, as if the 6-month period he served in prison since his abduction in late July 2019, including 15 days under enforced disappearance, is not sufficient for them.

ANHRI said “The continued detention of citizens in police stations despite receiving release orders for purportedly awaiting a signal or reference to their release from the National Security Agency- which has nothing to do with provisions the law- has become a phenomenon that the Public Prosecutor and all law enforcement officers have to confront.”

ANHRI calls on the competent authorities to swiftly implement the court order, free Abdel Rahman Yassin, and halt the undermining of the rule of law and judicial decisions.