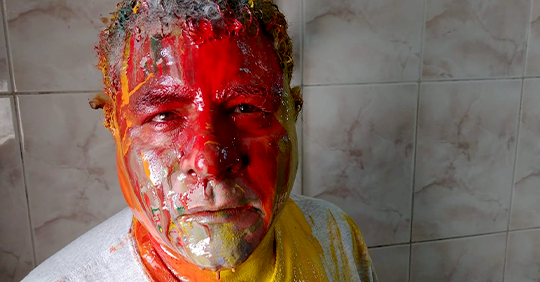 Today, armed officers attacked Gamal Eid, the director of the Arabic Network for Human Rights Information (ANHRI). The armed men beat him near his house, drenched him in paint, and pointed pistols in the faces of his neighbors and citizens who tried to defend from the attack.

The surprise attack took place this morning at about 11 AM, while Gamal was attempting to stop a taxi near his home to go to his office at ANHRI. As soon as he arrived at the corner, a number of security personnel and officers stepped out of three cars, knocked him to the ground and started beating him. Then a national security officer “whom Gamal Eid recognizes” gave an order for the officers to drench him in paint which they had, saying “So that he behaves himself!” When some passers-by and neighbors tried to intervene to protect him, two security personnel pulled out their pistols and threatened them, saying “Go away! Go away!”.

The same officer ordered them to take several pictures of Gamal Eid while he was lying on the ground as they were pouring paint all over him and beating him as if they were documenting that they had carried out what they were asked to do.

When one of the citizens tried to take pictures of the cars that were all black Kia Ceratos, he found that they are all without license plates.

This is the fourth attack this year on Gamal Eid. His car was stolen at the beginning of October this year, after which he was beaten and his ribs were broken on October 10, then his colleague’s car was smashed in mid-November, culminating with today’s attack which was more brutal and explicit, as it was lead by a national security officer that Gamal Eid knows by his features.

Gamal Eid said: “I think they do not want to repeat the scandal of torturing Julio Regeni to death, so they resorted to attacking me one time after another, to punish me, silence me and stop me from doing human rights work and my frequent criticism of the gruesome human rights violations, but again, silence and collusion are not our choices.”

Assault on Gamal Eid and stealing his car:

Archiving investigations into the incidents of assaults