The man behind the crippled media… 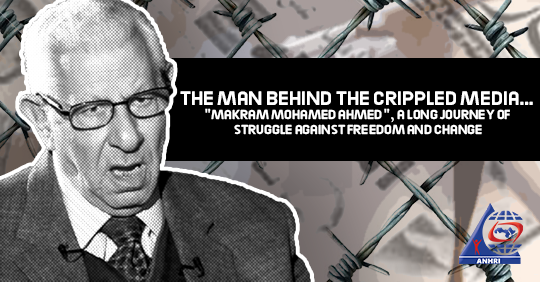 “Makram Mohamed Ahmed”, a long journey of struggle against freedom and change

The Supreme Council for Media Regulation (SCMR) is the main and-nearly- the only authority that controls print, audio and visual media in Egypt, in the absence of the Ministry of Information and the diminishing role of both the Journalists and Media Workers’ syndicates in dealing with the sweeping powers of SCMR. Therefore, SCMR bears much of the responsibility for the deteriorating situation of media in Egypt, and if it really represents the main factor, its head is directly responsible for the way the Council acts throughout the recent period and for the deterioration of the media situation in general. In this context, the paper provides an answer to the question “What is the Supreme Council for Media Regulation (its regulation/role)?” with a focus on its head, Makram Mohamed Ahmed, for being responsible for the poor situation of the media, which he personally described, in one of his meetings, as “crippled”.(1)

More than 500 blocked websites, dozens of banned articles and suspended programs, hefty fines, journalists deprived of their work, yellow press, defamation of opponents, investigations and detention of journalists and media workers; all of these practices have been carried out with the knowledge, and even with the consent and permission, of SCMR.

It is no exaggeration to say that the profession of journalism in Egypt is almost in a state of ruin and that the freedom of journalists has been completely paralyzed in the country. Hence, this paper comes as part of a series of attempts to find out the reason behind such deterioration, and to study and analyze it in order to understand how journalism can be freed from the restrictions imposed on it and how the Fourth Estate can restore its values and standards. Since the Supreme Media Council has direct authority over the media today, or so the law states, its president Mr. Makram Mohamed Ahmed, consequently, becomes the one (after the president of the republic) who is responsible for the situation of our “crippled” media today.

This paper addresses the following key points to understand the reasons behind the situation and the conditions the Egyptian media is currently witnessing:

1- What is the Supreme Council for Media Regulation (SCMR)? What is its role and regulation?

2- A snapshot (profile) of the beginnings of SCMR’s head Makram Mohamed Ahmed as a journalist, giving a brief overview of his career and life-time positions and posts

3- Makram Mohamed as Chairman of the Journalists Syndicate

4- Makram Mohamed and the Arab Spring, and his stance on the issue of freedoms

The Supreme Council for Media Regulation

The recent constitutional amendments aimed at canceling articles 212 and 213 of the constitution, (2) and this resulted in reintroducing the Ministry of Information, which was mainly abolished to encourage freedom of the press and make it appear in a balanced professional way that fits Egypt after January 25 revolution and June 30 demonstrations. However, this goal was circumvented by the establishment of the Supreme Council for Media Regulation which was granted powers that were about to ruin the profession of journalism and restrict freedoms at the same time!

On 11 April 2017, the Supreme Council for Media Regulation (SCMR), the National Press Authority (NPA) and the National Media Authority (NMA) were established upon a direct order from the President of the Republic in accordance with the provisions of Law 92 of 2016. Former Chairman of Journalists Syndicate “Makram Mohamed Ahmed” was appointed as the head of SCMR, Karam Gabr as the head of NPA and Hussein Zein as the head of NMA.

Other than its head, SCMR consists of 12 members. The Secretary and Undersecretary of the council are chosen by consensus. It is worth noting that the Secretary of SCMR, Ahmed Selim, was arrested on a charge of receiving a bribe in his office, and until this moment, the new secretary has not been selected yet. Selim was relieved of his duty and his name was removed from the SCMR’s official website. (3)

Presumably, the Supreme Media Council is the competent authority in Egypt that protects opinion, thought and expression and guarantees the independence of the media. It also undertakes the granting of media work licenses and the establishment of criteria and the performance assessment standards. Immediately after assuming responsibility, Makram Mohamed Ahmed stated that he is seeking to reform the media profession, so has he really reformed it throughout these 3 years since the council started its work? And is the council really seeking to protect freedom of thought and expression?

Makram… The indications of the beginnings

Following is a quick snapshot and overview of journalist Makram Mohamed Ahmed and the most important milestones in his career, which can give us a clear indication of why he chose such vital post, why he still remains in office and to where he will lead the council.

Being the secretary general of the Arab Journalists Union, Makram had fought some battles in favor of the regimes that show hostility to journalism and journalistic freedoms. This can be manifested when he directly helped to overthrow the board of the National Syndicate of Tunisian Journalists, after he took part in a special conference calling for appointing board members loyal to the defunct Tunisian regime, a move that had raised the ire of free journalists in Tunisia and all those who are concerned with freedom of opinion and expression in the Arab world. The Arabic Network for Human Rights Information (ANHRI) was following the case at that time and issued a statement saying: “If Makram Mohamed Ahmed participated in this conference in his capacity as Secretary-General of the Arab Journalists Union, we don’t really care and we have no problem. This union has become discredited since it released its report for 2006 falsely declaring Saudi Arabia as the most country that respects freedom of the press in the Arab world. But if he participated in this illegal conference as the head of Egypt’s Journalists Syndicate, the credibility of such long-established union would, in turn, be at stake. The matter requires an explanation from Makram Mohamed Ahmed.” (4)

In 2007, Makram Mohamed Ahmed again won the presidency of the Journalists Syndicate in a period that witnessed journalists receiving court rulings, along with attempts to ban protests on the syndicate staircase. At the time, Makram had met with Prime Minister Ahmed Nazif shortly before the syndicate’s elections, and although the government repeatedly denied that Makram was its own candidate, Nazif had announced after the meeting increasing the journalists’ technology (monthly) allowance from 200 EGP to 530 EGP, and indeed Makram won the post with a slight difference in the number of votes compared to the rival candidate. (5)

Makram, the Arab Spring and the path of liberties

“Libya, Syria and Yemen had fallen in the name of the Arab Spring, during which we haven’t seen anything but ruin, making it the (false spring)”,

— Makram Mohamed Ahmed said in a speech delivered in Cairo University on 13 March 2019. (6)

“I have read the article of Mubarak’s godfather and the Journalists Syndicate Chairman, Makram Mohamed, and I was about to vomit his words attacking the youth who called for the demonstrations on January 25 by declaring it the day of rage, as he said: “…unless this hostility is galvanized by a plot that aims at creating a fight with the police, and in response, the police will fire live ammunitions. What is now happening in Lazoghly Street is the same as what happened in Bourguiba, Tunisia… to open a path for a storm of chaos that would threaten the security of the homeland. ”

All of these statements and articles were released by Makram Mohamed when he was the Chairman of the Journalists Syndicate under Mubarak’s rule, and now, after he became the head of the Supreme Media Council, his stance on the Tunisian and the Egyptian revolution, the emergence of the Arab Spring, and the issue of freedoms appears to be sufficiently clear nowadays.

After the January Revolution, the Journalists Syndicate found out that Makram had been withholding all the monitoring reports released by Egypt’s Central Auditing Authority (CAA) throughout 25 years, in order not to be subject for discussion at the annual general assemblies. (8)  And when the revolution broke out and Makram was removed from power, the 25-year-long reports were all approved in one session at the general assembly.

Perhaps the most prominent incidents that have recently occurred in the field of the press and media since Sisi took power are; the “Black Sunday” incidents which took place on the first of May 2016 and the ensuing General Assembly of the Syndicate which was held two days later. These incidents came as a result of the demonstrations rejecting the transfer of sovereignty over the islands of Tiran and Sanafir to Saudi Arabia. The scene also witnessed the security forces raiding the headquarters of the Journalists Syndicate in early May. This is in addition to the bloated file of prisoners of conscience and the detained journalists, (9) and the expansion of website-blocking, not to mention the professional errors and hiccups made by the national and the pro-regime newspapers, TV channels and media professionals, including the SCMR’s head himself, and all of such errors have gone unpunished, though. (10)

Makram alleged he took up the role that defends the profession of journalism and its dignity, whereas he was actually defending the regime and the Ministry of Interior during such black ordeal against the decisions of the Syndicate and the former Journalists Chairman Yehia Qalash. The three media councils (SCMR, NMA, NPA) had been established only after the formation of the “Correcting the Path Front” which he took its leadership until he head the Supreme Media Council.

Makram Mohamed denies that journalists are being detained or imprisoned (11), turning a blind eye to the lists of detained journalists that are prepared by the Freedoms Committee in the Journalists Syndicate itself.

Veteran journalist Makram Mohamed Ahmed always supports the policies of the government, all the governments, although he hadn’t the chance to show any support or opposition to the rule of the Muslim Brotherhood under the late former President Mohamed Morsi.  He always opposes freedoms and fights against change; these are all attributes that can describe Makram Mohamed Ahmed during his career since the 1970s, either at time when he was the chief editor of a national newspaper or nowadays in his capacity as the head of the Supreme Media Council. Nonetheless, the official characteristic that always precedes his name these days, and which concerns us more, is being the president of the Supreme Council for Media Regulation (SCMR) while still being known for his hostility to freedoms and his blind support for the regime. From what we have monitored of Makram Mohamed’s statements and stances, he is completely responsible for the media chaos that is dominating the current scene. The 80-year-old journalist is still adhering to the same pattern of standing against freedoms and his candid hostility to change, represented in the revolution, its youth, its voices and writings.

Makram Mohamed being the head of SCMR, we can easily and clearly outline the extent of the negative impact he has on press freedoms. We, at ANHRI, call on all those concerned with freedom of opinion and the press to stand against any further collapse of the profession and to work on creating a professional press freedom that could restore the Fourth Estate’s ability to make a difference in Egypt’s political and public life.