After the assault on ANHRI’s Director, security bodies steal his car and smash the car of a lawyer from ANHRI… Once again, silence and collusion on gangs are not among our options 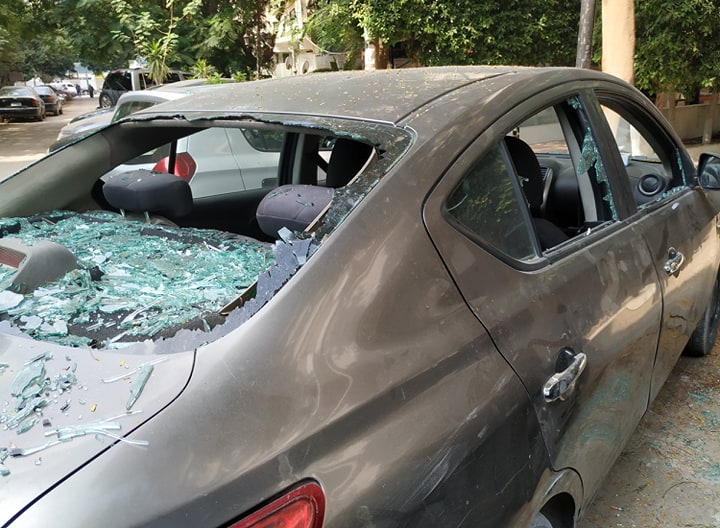 The Arabic Network for Human Rights Information (ANHRI) said today that a security body smashed the car of a lawyer from ANHRI at dawn today, days after the brutal attack on ANHRI’s Director, stealing his car, and the arrest of lawyer Amr Emam.

A security body stole the car used by ANHRI’s Director Gamal Eid a few weeks ago as a threat to shut up. When ANHRI continued to expose the abuses committed by the security bodies, they physically assaulted him, breaking his ribs, and then arrested ANHRI’s Lawyer Amr Emam. With the continued work of ANHRI and the ongoing criticism of the violations by ANHRI’s Director on Twitter and Facebook, a security body smashed the car of a lawyer from ANHRI, which was borrowed by ANHRI’s director yesterday. Some citizens, neighbors of ANHRI’s Director, reported that about seven individuals carrying firearms had stopped by the car yesterday evening and that one of them called that entity, saying “Yes Sir, it is a Nissan Sunny” and left, and this morning ANHRI’s Director was surprised to find the car completely smashed.

ANHRI’s Director Gamal Eid said: “I did not publish about the car that was stolen by this security body because I do not own it, I just borrow it from its owners from time to time to run some errands. Yesterday I received threats over the phone, the caller said ‘Behave yourself Mr. Gamal.’ the number calling was 01032094581, to which I replied, ‘I am not afraid of gangs.’ He called eleven times and I did not respond. Today the car of my colleague, which I borrowed yesterday, was smashed and destroyed.”

ANHRI’s Director added: “What this security body is doing is the work of criminal gangs, as long as I do not violate the law, and ANHRI’s work is all about helping and providing support for the victims of these criminal gangs, and in response to such criminal practices, we repeat: ‘We will not stop our humanitarian and legal work, and we will not remain silent about your criminal violations.'”

Details of the physical assault on ANHRI’s Director: