The regime’s plans are merely castles in the air… 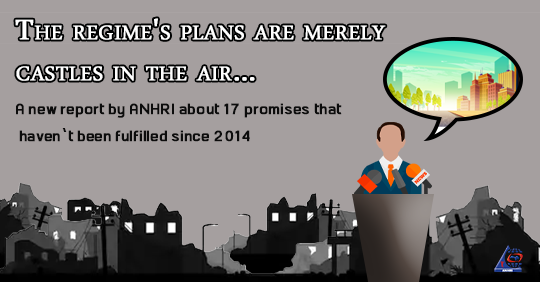 There is a famous fable that tells the story of a young child who used to lie a lot and deceive others by pretending to drown, until came the day when he was really drowning and no one believed him then. The moral of the story is that telling lies makes you lose credibility and trust in all your relationships and that deception might kill you.  As Abraham Lincoln said, “You can fool all the people some of the time and some of the people all the time, but you cannot fool all the people all the time”. This is, at least, reasonably and logically certain. Nevertheless, the Egyptian regime seems to have a different opinion!

“Hop Hop Hop … Up”, this is how “Ali Beh Mazhar”- a famous Egyptian movie character- promises people to make them rich in a very short time, as the famous movie narrates. The same scene is repeated in reality as well; endless promises, vows of near prosperity and project plans with a timeline that ranges from six months to a maximum of four years, this is what state and various government bodies’ officials always talk about. Although five years have passed on since the current president took the reins of power in Egypt, nothing has been achieved pertaining to the expected economic breakthrough, but rather, the matter is getting worse. However, this doesn’t prevent the regime from making more empty ‘castles in the air’ promises and setting a new timeframe for its plans.

This paper monitors the government’s promises and statements regarding what has been announced as “definite plans and timetables”; in an attempt to spread patience among citizens calling on them to bear the country’s economic distress just for a specific period of time, and to bear the unfortunate financial burden placed on them since the floatation of the Egyptian pound coupled with any other decisions issued pursuant to the IMF loan terms. The paper addresses these promises through three main axes: The President of the Republic, the government and officials, and the pro-regime media; detailing a number of promises and pledges made by each of these axes in a chronological sequence starting from 2014 to 2019. All of these statements include timetables and plans that promise a better situation- and sometimes even declare that the situation has already been improved- which is not true, conveying erroneous messages and assessment of the country’s economic situation.

The President of the Republic: From candidacy to his second presidential term, a journey of vows and broken promises!

This is how TV host Ibrahim Eissa echoed the then-presidential candidate Abdel-Fattah El-Sisi’s answer when he asked him how long it would take him to make citizens witness improvement.  The series of the president’s promises began since he announced his run for the presidency. Although he did not provide an electoral plan, he appeared in a TV interview with Ibrahim Issa and Lamis al-Hadidi on CBC Channel saying that people would experience a noticeable improvement in the country’s economic, educational and health conditions and their life, in general, within only two years! (2)

This was another vow that El-Sisi made, and was confirmed by providing a project timeline and developing an action plan while identifying the funding sources. This includes, but is not limited to, the opening of the Regional Ring Road on 9 September 2018, which, after only one year from its inauguration, collapsed on 23 October 2019 due to a rainfall that lasted for only one hour causing the formation of a deep sinkhole, and the road has been closed as a result. This is also apart from the continuous road accidents and landings.

Sisi renewed his two-year promise and reaffirmed it (once more), two months after taking office, during his speech commemorating Egypt’s National Farmers’ Day.(4)

It seems that the two-year grace period hadn’t started yet (at this point), as we expected right after his assumption of the presidency in July. El-Sisi kept renewing his two-year vow even after nearly six months had passed on since he took office. During the inauguration of Hurghada International Airport and the Seaport projects, he reiterated the 2-year promise, without counting the cut-off period, saying: “Rest assured ordinary Egyptians, within two years you will see results”. (5)

Al-Sisi went on saying: “Whatever happens- and nothing will happen, but in case if something happens, the army, the state and I will be responsible for it. Is this a promise? Of course, it is”. This wasn’t the first vow El-Sisi made regarding general commodity prices. From the first day he took the reins of power, El-Sisi keeps asserting and reiterating his promise that basic commodities will not be affected. However, in reality, we can find that the prices of basic goods and services have increased by up to 140% in some goods! (6)

Two years after making his first promise during his candidacy, El-Sisi made a new promise with a new time limit, despite the fact that the first one hasn’t been fulfilled yet, as expected by his supporters. The second promise was made during a speech that the president delivered at a conference in Ismailia city, and at this time, he gave a grace period of six months; i.e. in mid-January 2017. Indeed, “things got much better” as he stated earlier. (7)

The six-month period elapsed and was followed by almost a year and a half, and still the desired prosperity has yet to be achieved. Rather than explaining the reasons why he continually reneged on his promises, El-Sisi reiterated his demands of patience, saying “Be patient and you’ll see wonders in Egypt”. This was El-Sisi’s promise to Egyptians, but at this time he didn’t specify the kind of wonder nor the time-span during which he will be achieving it! (8)

The government and ministers: Promises and time-bound plans for “fake” goods/services!

The pro-regime media professionals: A year of prosperity that will never come!

From the above-mentioned examples, we can identify and outline the false promises made by state officials and their media mouthpieces in two points:

– First: Statements made by state officials themselves; the President of the Republic, ministers and those in authority, involving specific time-bound action plans. By virtue of their office and positions, which makes promises and vows go beyond the mere friendly and informal promises; deeming them to be (formal) political commitments instead, officials must then be held accountable for reneging on their promises. Thus, officials’ echoing of such commitments despite the non-fulfillment of their previous ones is considered as an accumulation of errors and miscalculation that requires accountability.

– Second: The main objective of media reports and directed messages, which we have monitored part of, is to intensify the dose of sedation given to citizens in order to enable them to endure the painful economic situation without showing any kind of objection. Such sedation or painkillers can indeed be useful if there are any signs of upcoming improvement to the economic situation that can promise the end of this pain in the near future, but the situation really needs a completely different plan to be carried out. Ignoring this fact, or trying to obscure or blackout the economic burdens that the Egyptian people bear because of debts and other issues, constitutes a dangerous threat, which will, in the long run, make people and the pro-regime audience lost their trust in state officials and those who represent them in the media.

Note about the original title: The original title in Arabic goes “The regime’s plans are merely coated with butter…“ which is half of an Arabic saying about empty promises “Words of the night are coated in butter, next morning they melt away”.