Despite the environment of intimidation and treason accusations, which has been practiced by the Egyptian authorities, March witnessed a number of social and labor protests; including the protests of first-grade secondary students against the new examination system after the tablet malfunction which disrupted the students’ performance. Also, the scene of the principle of Gamal Abdul Nasser School, who pulled a student’s hair and brought her to the ground, ignited anger among students and parents.

Also, this month witnessed an another type of groups that exercised their right to protest, including two protests carried out by workers abroad demanding the embassies of Egypt to intervene to protect them, and the complaint filed by residents of Garden City because of the logging on the Corniche’s trees.

Despite the decline in the number of labor protests this month, however, there was a big sit-in for the engineers and workers of Al-Nasr Contracting Company, in protest against the non-payment of financial dues, and security services faced it with the arrest of 7 employees of the company, including trade unionist Talal Atef. 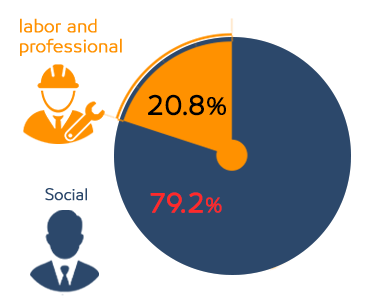 The program of freedom of expression of labor and social movements monitored 48 protests during March; of which 10 were labor and professional, and 38 were social
Summarized it as follows;

The program monitored 10 labor and professional protests, detailed as follows:

The program monitored 2 cases of sit-ins during March making it ranked second in terms of methods of labor and professional protesting, where;

Coming in 3rd place as a method of labor and professional protesting, there was 1 case of hunger strike, where:

Coming in 4th place as a method of labor and professional protesting, there was 1 case of threatening to protest, where:

Coming in 5th place as a method of labor and professional protesting, there was 1 case of threatening to protest, where:

It came first in terms of methods of social protests with12 cases, in protest against the poor social and economical living conditions, where the reasons were:

Gathering came 3rd in terms of methods of social protesting with 9 cases, where;

It came 4th regarding methods of social protests with 4 cases, where;

This method was only used once for social protesting when;

The resident of Garden City district filed a complaint on March 27th because of cutting off the trees by the Corniche.

Cairo topped all governorates in terms of labor and professional protests for March, while the protests by Egyptians abroad came second, and Alexandria and Giza and other governorates came third with one protest each.

Cairo topped all Egyptian governorates in terms of social protests during March with 11 protests, Giza came second with 7, both Monufia and Kafr Al-Sheikh came third with 4 each, Daqahalia was fourth with 2, then (Menia, Port Said, Sohag, Aswan, Assiut, Luxor, Alexandria, Beheira, Sharqia, and Qalubia) came fifth with 1 each.

The health sector topped all labor and professional protests during March with 4 protests, both construction and other came second with 2 each, and third and last were both chemical industries and metal & engineering industries with 1 each.

As shown in the below chart, “others” sector which included suicide and attempted suicide cause of poor living conditions topped all other sectors of social protests with 12 protests.

Education and scientific research came second with 6 protests, localities and services came third with 5 protests, security came fourth with 4 protests, sectors of (lawyers, transportation, and commerce) came fifth with 2 each, and sectors of (housing, petroleum, sports, health, and employees) came sixth with 1 each.

Thus, from the previous presentation, we can see that;

The Egyptian authorities have zero tolerance for any objection or protesting, where every protester is considered an enemy of the regime, being charged with belonging to terrorist groups. They also reject all means of protest, both group and individual.

The charts show the increase in the number of protests in general compared to last February; however, social protests increased this month while labor protests declined.

Also the charts show the increase of number of vigils compared to suicides and attempted suicides which decreased compared to other forms of protest.

Program of Freedom of Expression of Labor and Social Movements