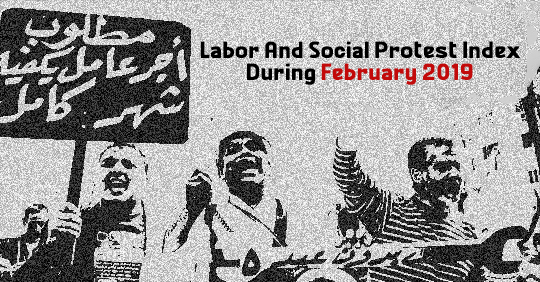 This month, the program monitored a unique phenomenon. Owners of stores and industrial workshops in Egypt’s different governorates have shut down their shops for several days and started to lay off daily wage workers and craftsmen; after it has been reported that “a tax inspection campaign will take place imposing huge and arbitrary levies on shops leading their owners to pay large sums of money and those who don’t pay taxes to have their shops sealed”.

This news has provoked an outburst of anger in such governorates, not to mention the state of confusion that has hit the market there.

The campaign started on February 23 from Damietta governorate, where many workshops and stores were shut down in different parts of the province, before it has extended to reach Kafr El-Sheikh, Dakahlia and Gharbia governorates.

The program monitored 46 protests during the month of February, including 18 labor and professional protests and 28 social protests, summarized as follows:

The program has monitored 18 labor and professional protests, distributed as follows:

The details of such protests go as follows:

Protests came at the top of the methods of labor and professional protests during February 2019 with five cases detailed as follows:

Striking to work (work stoppage) came in the second place in terms of the protesting methods adopted by labor and professional protests, with 4 cases detailed as follows;

Coming in second on the list of labor protests’ methods, the month of February witnessed at least 4 sit-ins, as follows:

With only two cases, threats to protest came third in terms of the methods of labor and professional protest during February 2019, as follows;

Filing memorandums or complaints came third among labor and professional protests with 2 cases as follows:

Gathering came in the fourth and final ranking among labor and professional protests took place during the month of February with only one case;

The program monitored 28 social protests during the month, detailed in the following chart:

with once case for each, as detailed in the following lines:

16 cases took place during February 2019 leading it to be at the forefront of social protests’ methods. The details of these cases are outlined as follows:

Hanan, 47, committed suicide by throwing herself off the balcony of her 5th-floor apartment in Dar El- Salaam neighborhood on February 21; because she couldn’t afford her daughter’s marriage expenses and

Gathering came second in the social protests with 4 cases took place this month as follows;

Threats to protest came third in the social protesting methods with 3 cases occurred in February, as;

The month of February saw only one protest rally as a means of social protest:

There was only one case of striking to receive services in the month as;

With 4 protests organized this month, Cairo continued to be at the forefront of labor and professional protests for the second consecutive month this year. Then Al Gharbia came second with 3 protests each, and (Giza, Dakahlia, Sharqia and Damietta) governorated came third with 2 protests each. Then finally we have (Ismailia, Red Sea, and several governorates) with 1 each.

Social protests in February have largely been centered in the governorates of Cairo, Giza and Dakahlia. Cairo topped the social protests this month with 9 protests, followed by Giza with 4 ones, then came Dakahlia governorate with 3 protests. Protests then extended in a lower range to cover the governorances of Qaliubiya, Sharqiya and Luxor with two protests each, then to Aswan, Alexandria, Fayoum, Beni Suef, Minya and Qena governorates with one protest each.

The Spinning and Weaving sector topped the labor and professional sectors with 4 protests this month, followed by the Transportation and Communications sector represented by 3 protests, while (Media and Journalism, Water and Sanitation, Electricity, and Employees) sectors came third with 2 protests each.

“Other” sector; “Suicide and Attempted Suicide”, topped all social sectors this month with 16 cases, while the “Localities and Services” sector ranked second with 3 protests.

Sectors of (Security, Education and Scientific research) came third with 2 cases each. Social Protests organized in February included sectors of (Health, Housing, Trade, Food industries, Water& Sanitation and Electricity) with one protest each.

Thus, as indicated in the presentation set out above:

It is also clear that Cairo continues to occupy the forefront of social protests as well as the labor ones.