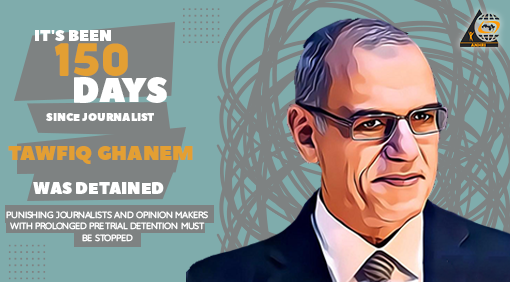 The Arabic Network for Human Rights Information (ANHRI) said today that after 150 days of unsubstantiated pretrial detention against journalist Tawfiq Ghanem, Cairo Criminal Court’s terrorism circuit, convened at the Police Cadets Institute in Tora Prison Complex, is considering today the first detention renewal session (in the counseling room) pending Case No. 238 of 2021 State Security, in which “Ghanem” faces allegations and an accusation of joining a terrorist group with knowledge of its purposes.

ANHRI said that five full months have passed without Ghanem being appeared before the State Security Prosecution except once; in the first investigation session held on 26 May 2021, when he faced the aforementioned accusation without mentioning the group that he allegedly joined while restricting the session to questioning his intellectual views and the history of his journalist work, especially the period during which he headed the Cairo office of Anadolu News Agency. He hadn’t been faced by any specific incidents at the time, and his detention renewal sessions have continued to be conducted just “on paper”, without being appeared before the prosecutor and without being enabled to deny the accusation leveled against him, in a clear and flagrant violation of the rules and guarantees to a fair trial.

The security forces arrested Tawfiq Ghanem from his house in Giza’s 6th of October City on 21 May 2021. Following his arrest, the lawyer of his family filed a report with the Public Prosecutor demanding an investigation to be opened into the incident of Ghanem’s illegal detention and to enable him to contact his family and lawyer. The report was registered under No. 21823, dated 25/5/2021 (Petitions of the Technical Office of the Public Prosecutor). And after 5 days in enforced disappearance, Ghanem was brought before the State Security Prosecution and interrogated over the aforementioned case and accusation.

ANHRI calls for the prompt release of the journalist and halting the use of unjust and prolonged pretrial detention; since he didn’t commit any crime that is punishable by law. He made clear before the investigative authorities that he had already quitted journalism following the closure of the Anadolu Agency office in Cairo, and since then he hadn’t engaged in any journalistic activity. He also affirmed his rejection of all forms of violence.

ANHRI, hence, calls on the judicial circuits that are considering Tawfiq Ghanem’s detention renewal to implement the Code of Criminal Procedure and its provisions, so as to do justice to the journalist along with other prisoners of conscience. The Arabic Network also demands not to take into account the investigation records and reports conducted by the National Security or consider them as a reliable document; because they are nothing but mere unsubstantiated statements as the Court of Cassation put it, and to stop using them as a pretext for imprisoning and punishing thousands of citizens without a crime of offense.