The Interior Ministry seizes a visiting permit issued by the Prosecution for Mohamed Oxygen and refuses to implement it… And the Public Prosecutor refuses to receive the complaint… This is the rule of law in Egypt!

The Arabic Network for Human Rights Information (ANHRI) announces today that the Public Prosecutor’s office refused to receive a report submitted by ANHRI’s lawyers regarding the Tora maximum security prison authorities’ refusal to implement the Prosecution’s official permission to visit blogger and prisoner of conscience “Mohamed Oxygen”, before they seized the permit refusing to return it back to the lawyers.

ANHRI had obtained a visitation permit from the State Security Prosecution for its client Mohamed Oxygen, a blogger and prisoner of conscience; so as to check on him after his attempt to commit suicide as a result of the harassment and ill-treatment he has endured in prison. But when they headed, yesterday (Sunday) morning, to Tora Prison Complex and handed the official visitation permit to the prison officials, and after waiting for four hours, they were surprised by the policemen informing them that they couldn’t complete their visit without giving any reasons. Not only that, but they also refused to return the permit back to the lawyers.

ANHRI’s lawyers then headed to the Public Prosecutor’s office in New Cairo, but it refused to receive the complaint, and instead, it requested an official power of attorney or else to file an official report via the Internet.

The fact that Article 25 of the Criminal Procedure Code allows “anyone with knowledge of the occurrence of a crime to inform the Office of the Public Prosecutor or a judicial officer without a complaint or a request to do so”, makes it clear that the Public Prosecutor’s office, in turn, violates the law and continues to give the Ministry of Interior the green light to run over the law with impunity.

Gamal Eid, ANHRI’s director, said: “The misery that Egypt’s justice system suffers and the Ministry of the Interior’s trampling on the rule of law is no longer a secret to anyone. The Interior is no longer exerting any effort to try to justify its violations, and the reason is: the Public Prosecution, which provides it with protection and covers up its violation of the law! But we will never tire of demanding the restoration of justice and respect for the law and of exposing the infringement and violations practiced by the Ministry of the Interior alongside the Public Prosecution in light of the darkest periods of darkness that Egypt is currently experiencing.”

It is noteworthy that blogger Mohamed Ibrahim, owner of the “Oxygen Egypt” blog, has been held in detention since April 2018, meaning that he has spent about 40 months behind bars, during which he enjoyed only two months of freedom in the summer of 2019, before he returned to prison in a new fabricated case, in retaliation for his role in introducing professional media via his renowned blog.

As a result of his years-long detention under no real accusation in a notorious prison (Tora maximum security 2), and with the escalation of ill-treatment coupled with the denial of visitation, “Oxygen” attempted suicide to escape such crackdown and revenge, but he was saved, and consequently has continued to endure the suffering and violation of his rights as a citizen and a prisoner of conscience. And instead of enforcing the law and releasing him, the Public Prosecution is taking part in the violations committed by the Ministry of Interior; whether through prolonged detention exceeding the maximum limit of remand detention prescribed by law, or thorough abhorrent phenomenon of rotation/ recycling (adding defendants to new cases), or through the Ministry of Interior’s refusal to accept complaints and reports regarding cases of violation of the law.

ANHRI hence holds the Ministry of Interior and the Public Prosecutor fully responsible for the violations committed against its client Mohamed Oxygen. It also announces to the public opinion that Oxygen’s life is in danger as he is being held incommunicado and deprived of visitation and justice. 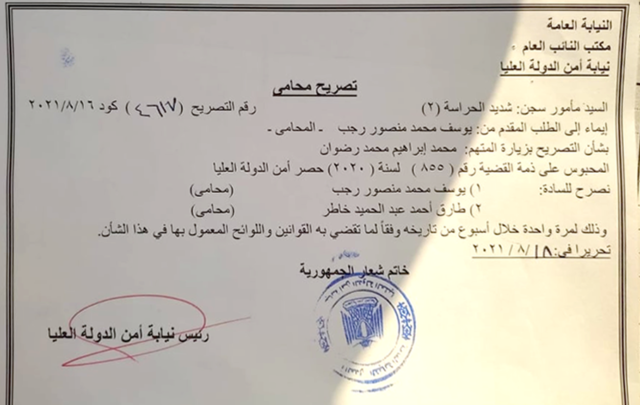