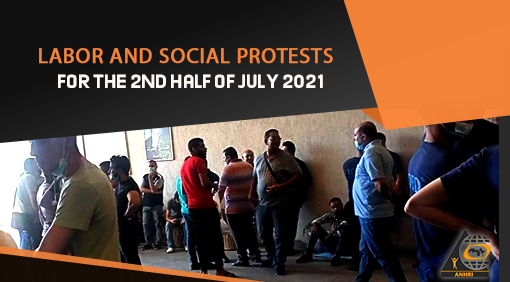 Eight social and labor protests took place in the second half of July 2021, three of which are labor and five are social.

One of the main reasons behind organizing the labor protests during the reporting period is: the failure to implement Presidential Decree No. 69 of 2021 “the periodic bonus for those who are addressed in the Civil Service Law,” which have aroused the anger and discontent of workers and prompted them to express and demonstrate their anger in more than one form; such as labor strike, sit-in or collective complaint. For example, more than 2,000 workers in the Lord Factory for Razors and Blades in Alexandria went on strike in protest against the administration’s decision to deduct from their salary along with the non-implementation of incentives and grants on holidays and occasions.

Following is the details: