A dysfunctional justice, and citizens’ fates and freedoms are the victim 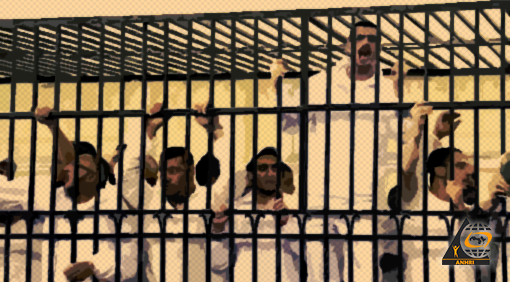 The Arabic Network for Human Rights Information (ANHRI) has expressed its resentment and rejection of the consequences of the decisions issued by the Criminal Court’s 3rd Terrorism Circuit convened, on 21 June 2021, at the Police Cadets Institute in Tora, overtly ordering the release of some defendants in the presence of ANHRI’s Criminal Justice Unit lawyers and others.

Last Monday, lawyers of the Criminal Justice Unit at ANHRI started to carry out their job of legal defense for their clients, who have been held in remand detention since mid- September 2020, in the session convened before the criminal court’s 3rd Terrorism Circuit at the Police Cadets Institute in Tora to consider their detention renewal pending many State Security cases, including Case 960 of 2020 (Investigation). After finishing their pleadings, in which they asserted there is no basis or grounds for their clients’ pretrial detention, the court’s president, explicitly and publicly, told the lawyers (face to face):

“The court has examined and checked the defendants’ files and did not find anything against (convicting) them, so it is releasing them”.

However, when ANHRI’s lawyers reviewed the decision at the State Security Prosecution’s headquarters to start following up the procedures and implementation of the release order issued for their clients (4 defendants), they found, in a sad surprise, that the proven decision on paper is a 45-day detention renewal order replacing the release order issued by the court in their presence.

ANHRI reinforces its stance rejecting the exceptional judiciary and its exceptional laws which allow for holding detention renewal sessions at exceptional headquarters, turning a blind eye to the disgrace and humiliation experienced by some citizens whom their bad luck pushed them to appear before one of the exceptional terrorism circuits introduced by the Terrorism Law issued in 2015 and its subsequent amendments.

ANHRI, hence, is raising a question to all those concerned with justice and the rule of law in Egypt about the extent of the permissibility and the legality of the aforementioned incident against the defendants and their lawyers, and how an explicit decision by a supreme court can be replaced days after it was issued and the families of the defendants got to learn about it.

ANHRI calls on the Public Prosecutor to necessarily consider and check the situation of huge numbers of citizens who are being held on remand in connection with the September 2020 incidents (in Cases No. 880 and 960 of 2020 Supreme State Security Prosecution), most of whom are marginalized and poor; especially since the expansion of random arrests was proven at that time. Also, most of these defendants were proven to be detained over insufficient evidence, therefore there is no alternative to achieve justice except by releasing them immediately and referring those whom the Public Prosecution believes there is sufficient evidence against them for a natural and fair trial.