A story of an Egyptian citizen who was forcibly disappeared 3 times, A story of impunity and absent justice, the Public Prosecution is primarily responsible 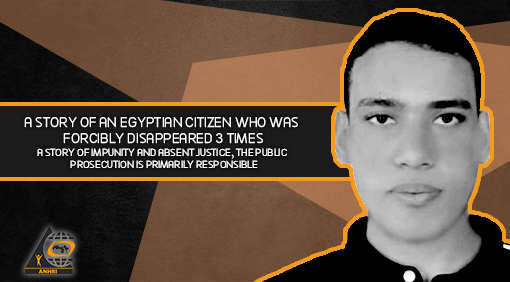 The Arabic Network for Human Rights Information (ANHRI) vehemently condemns the security services’ deliberate fabrication of investigative records and reports, their failure to respect or comply with court rulings ordering the acquittal of citizen Khaled Atef, and their insistence on cracking down on him by holding him in continued detention using the cursed mechanism of rotation/recycling (adding defendants to new cases), in light of the public prosecution’s disregard for the implementation of the rule of law.

Lawyers of ANHRI’s Criminal Justice Unit headed to Al-Salam Police Station to follow up on the procedures of the release order issued by the criminal court for their client Khaled Atef. But when they went there, they were surprised to find that their client disappeared and that the police officials denied his presence within the police department. When asking about the reason for his detention, ANHRI’s lawyers were told that their client has been arrested over a new case, which is reasonably unacceptable as Khaled has been held under enforced disappearance and arbitrary detention since mid-2019.

Khaled Atef Mohamed, 24, was arrested in mid May 2019, when a security force broke into his family’s house, arrested him, along with younger brother who was released several days later, and took them to Al-Maasara Police Station, South of Cairo. He had been missing for two months until he appeared before the Helwan Prosecution on a charge of joining a terrorist group pending Case No. 20398 of 2019 Helwan Misdemeanor, and was ordered detained for four days. But, on 25 July 2019, the appeals judge ordered his release on bail of EGP 10,000. Khaled paid the bail, but the police officials refused to let him free and had forcibly made him disappear. As a result, his family and lawyers filed official reports and sent telegrams to all parties and authorities, but to no avail. The authorities haven’t yet to open an investigation into the matter. They ignored his case and gave no attention to his rights. Citizen Khaled Atef’s illegal detention and enforced disappearance continued at the time.

After several months of enforced disappearance, Khaled Atef appeared, once again, as a detainee within the Al-Salam Police Station in connection with Case No. 2404 of 2020 Emergency State Security in which he was accused of possessing firearms and bullets. Khaled appeared before North Cairo Criminal Court (Circuit 23) in presence of his lawyers, who submitted to the court’s judges all the official documents that prove that their client had been subjected to severe violations including the security apparatus’ fabrication of accusations attributed to him, which was enough for the court to immediately acquit Khaled Atef.

And again, Atef’s lawyers made new attempts to release his client from the Al-Salam Police Station, but they were surprised to find him disappeared for a third time, and once again, the police station’s official denied their knowledge of his presence. In another fatally exhausting journey to search for him roaming all police stations and security directorates, it has revealed that Atef is held at Badr City Police Department (East Cairo) after he appeared before Badr Prosecution over a new trumped-up investigating report. Adding to the farce, the Public Prosecution decided to detain Khaled Atef for 15 days pending investigation into Case No. 1409 of 2021 Badr Administrative. ANHRI’s lawyers appeared before the Deputy Public Prosecutor in charge of considering Atef’s detention renewal and submitted to him the documents that prove the grave violations committed against their client as well as the security services’ fabrication of many records and facts. But it seems that all such evidence is deemed not enough by the Prosecution to release Atef or even bring the attention or concern of the Public Prosecution in defense of the law and its sovereignty against the security services’ attempts to tamper with it.

Introducing the grave violations suffered by citizen Khaled Atef and his repeated enforced disappearance, in addition to the severe infringements committed by the security services, ANHRI hopes that its pleas will be heard by any official to take an action in order to end such shameful farce that violates the rights of a normal citizen.

ANHRI calls on the Supreme Judicial Council to triumph over the legality of its judicial rulings and the rights and freedoms of citizens. It also urges the Public Prosecutor, in his constitutional and legal capacity and responsibility for his subordinates, to supervise the implementation of court orders and to stand as a brick wall against the security services’ blatant violation of the constitution, the law and judicial rulings and the tampering with the citizens’ lives and freedoms of.