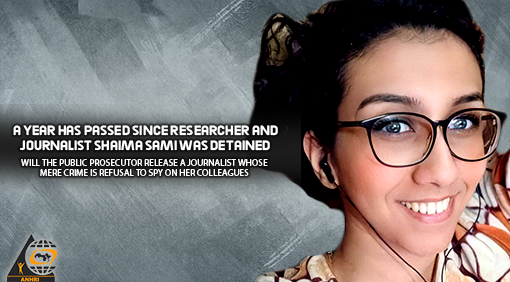 The Arabic Network for Human Rights Information (ANHRI) said today that prisoner of conscience, journalist and researcher Shaima Sami has completed a year behinds bars, since she was kidnapped from her home in Alexandria by a group of police officers on 20 May 2020. Sami had remained kidnapped and missing until she appeared as a defendant before the Supreme State Security Prosecution in Cairo, on May 30, on charges of joining a terrorist group and publishing false news. These charges are based on fabricated and unsubstantiated investigation report that doesn’t entail any evidence or legal presumption of the validity of the accusations attributed to her. The investigating report also turns blind eye to the fact that she had been kidnapped for 11 days before she appeared before the Prosecution, which ruled to hold the journalist in pretrial detention  pending Case No. 535 of 2020.

Thereafter, the State Security Prosecution decided to consecutively renew her detention without interrogating her or hearing her statements, in disregard of the law, until the court ordered her release with precautionary measure on 17 January 2021, and accordingly she was transferred to the Alexandria Security Directorate.

However, and once again, Sami had been held in illegal detention for two weeks before she was rotated/ recycled (added to a new case). Consequently, on 30 January 2021, the journalist appeared, once again, before the State Security Prosecution for investigation into Case No. 65 of 2021 State Security, over which she is being held on remand on a charge of joining a terrorist group.

Gamal Eid, ANHRI’s director, said: “Shaima Sami didn’t commit any crime or offense nor did she violate the law, and the Prosecution knows that! But she was arrested and harassed after she refused to obey a police summon asking her to come to the State Security headquarters in Alexandria known as “the Pharaoh” in order to recruit her and force her to work as a security guide/spy for the National Security Agency, like many citizens whom the authorities bargain in return for their freedom by forcing them to work as security guides for the benefit of this police apparatus”.

Eid added, “We will not lose our hope that the State Security Prosecution will stop taking part in the crackdown practiced against democracy advocates and opinion makers alongside the National Security Agency, which is hostile to the rule of law and is being used as a spearhead in an attempt to establish a state of fear and silence. We still insist on criticizing the performance of the Public Prosecutor and urging him to implement the law and stop jailing innocent people by rotating and adding them into new miserable cases, in addition to stop using pretrial detention as punishment and not as a precautionary measure.”

ANHRI also affirms that the release of peaceful political prisoners, halting the use of pretrial detention and “rotation” as punishment, and the implementation of the other demands included in the initiative “#First7Steps” is the only way for any talks about a political breakthrough and the return of the rule of law to Egypt.