Al-Qatta prison is located in Giza Governorate at Al-Khatatbeh Road, Berqash, in al-Qatta village which belongs to Embaba area in Giza in the Western Desert. It is called “Al-Alfi’s graveyard” as it was named after the former Minister of Interior Hassan al-Alfi.

In 1992, the then-Interior Minister Hassan Al-Alfi issued a decision to establish Al-Qatta prison to accommodate dangerous detainees and prisoners especially the hardliners and extremists. He directed his aide Habib Al-Adly (who later became the Interior Minister) to start building a prison that could accommodate and hold a number of political and criminal detainees held over violence cases.

Al-Alfi supervised the construction process of the prison himself. He sees the ideal prison as a cemetery for detainees especially those who tried to personally assassinate him several times before. He paid a surprise visit to the prison’s construction site, accompanied by a brigadier-general and a number of soldiers, to emphasize the execution of orders and to make sure it would be a harsh prison.

Consequently, in 1995, al-Qatta Prison was opened in the presence of Hassan Al-Alfi, and detainees and prisoners in violence cases began to be “shipped” from Tora, Al-Qanatir (men) and Assiut prisons to the maximum-security Qatta prison.

According to some inmates at al-Qatta Prison, detainees were being kept in extremely crowded and poorly ventilated cells for whole weeks, and when it became extremely hot (in summer) July 1995, a number of prisoners died and the prison’s reputation began to deteriorate and its gruesome reality was revealed. At this point, the Interior Ministry sensed the impending danger, especially that everything related to the prison; inmates’ names and files were lying in Al-Alfi’s office. And with the increase of fatalities at Al-Qatta cells, the Interior Minister tried to improve the situation somewhat ordering his aides and soldiers to open a main window in each ward (the ward holds approximately 1,000 detainees), but the number of deaths continued to rise. Also, the prison’s hospital was operating at a capacity of one doctor and four nurses from among the security personnel, but because of the large number of gates, it took almost an hour to transport one detainee through the several new gates after searching him. And as a result, more than a detainee died on the way to the hospital which has only one multi-specialized doctor.

– The Interior Ministry tried to enhance the prison’s conditions and began to change its system. It ordered the prison’s authorities to give detainees extra hours in the sun extending the “sun queue” until two o’clock in the afternoon, especially after many of the prison inmates got sick as a result of overcrowding and lack of exposure to sunlight. Scabies also spread amongst some of the detainees who went on a series of strikes to pressurize the Interior Ministry to transfer them to other prisons outside Al-Qatta area.

Al-Qatta Prison’s establishment costs about 18 million EGP and after Al-Alfi’s modifications, the expenses reached nearly 24 million EGP. The establishment of the prison ignited a rivalry between Al-Alfi and his assistant for National Security Affairs “Habib Al-Adly”, as news began circulating behind the scenes at the Interior Ministry about ongoing strife between Al-Adly and a group of new experts on the one hand and Al-Alfi and the ministry’s old guard on the other hand. As a consequence, Al-Adly, who was backed by sovereign bodies, established alone Al-Fayoum General Prison “Damo Prison” which was surrounded by an aura of secrecy and harshness. For his part, Al-Alfi took Al-Qatta prison as an opportunity to prove to the ruling power that he is no less ambitious than his aide (Al-Adly), so he made the hasty decision to build a maximum security prison in Al-Qatta area in the desert, in a move that was always deemed by Al-Alfi as a way to “practically restore his honor” in response to Al-Adly’s growing influence and power; as the two were competitively scrambling to build prisons and detention centers that clamp down on detainees and violate their rights.

The prison can hold up to 4000 inmates. It consists of 4 wards; each has a capacity of 1000 detainees, and has a giant wall and fully-armed security forces to guard it, and the distance between each ward and the other is 500 meters.

Incidents and situations connected to the prison:

After Al-Adly became Minister of the Interior, he used to resort to Al-Qatta Prison depending on his mood. Referring political detainees, especially journalists detained over opinion cases, to nearby prisons or detention centers is the norm in Egyptian prisons. However, this didn’t happen in the defamation lawsuit (Case No. 5260 of 1999) filed by the then-Minister of Agriculture Youssef Wali against “Al Shaab” newspaper; suing the newspaper’s chief editor Magdy Hussein, Salah Badiwi, a journalist working for the newspaper, and cartoonist Essam Hanafi, after they lashed out at Wali over the “carcinogenic pesticides” issue. Hussein and Badiwi were sentenced to two years in prison with force and labor and the cartoonist to one year in prison in addition to a fine of EGP 20,000 per capita. The Journalists Syndicate appealed against the ruling, but the appeal was turned down by the court of cassation, and at this point, the case took a different form. Based on Al-Adly’s directives, the three defendants were deported from the court to Al-Qatta prison directly. Such fierce directives came as a notorious reaction by one of the Egyptian regime’s oldest figure (Youssef Wali) and the Interior Minister (Al-Adly), in the litigation between Al-Wali and Al-Shaab newspaper especially that the case became a matter of public concern at the time. Therefore, putting Al-Qatta Prison in the political game gives a clear message from the side of Al-Adly, the new minister at the time, to everyone that: the prevailing norm or current practice in the political game had changed at the hands of a tyrannical minister who uncontrollably practiced suppression under no accountability or oversight.

– Moreover, riots took place in several prisons- including Al-Qatta- following the January Revolution; as inmates were protesting for the 6th time, demanding that they be released after exceeding the half of their prison term.

Ibrahim Awwad, an inmate of Al-Qatta prison, said in a phone call to a newspaper that the prison guards were randomly opening fire at prisoners although there wasn’t any escape attempt, adding that in previous times they left the dead bodies of the prisoners inside the wards until the smell came out while they threw some of the bodies out and buried them outside the prison.

Al-Qatta prison also witnessed one of the most mysterious cases that took place during the January revolution, which is the killing of Major General Muhammad Al-Batran, who died under suspicious circumstances casting doubts about those involved in his murder. Such suspicions were expressly stated in a report made by one of the human rights organizations that are close to the Egyptian authorities. The report also demanded to bring those suspected of killing Al-Batran to account; saying: “the police allegations that the prisoners who tried to escape were the ones who fired shots are false and have no basis, which indicates that Al-Batran was indeed killed by the Qatta Prison authorities and not by the prison’s inmates as they claim”.

In 2017, decree No. 1473 of 2017 was issued by the then-Minister of Interior Magdy Abdel Ghaffar declaring Al-Qatta Military Rehabilitation Prison as a general prison “General Rehabilitation Prison”, where those mentioned in Article 3 of the Prison Regulation Law No. 396 of 1956 shall be accommodated/placed in it:-

Article 3 states that: The sentences issued against the following persons shall be carried out/executed in a general prison:

(A) Those sentenced to imprisonment.

(B) Women sentenced to hard labor.

(c) Men sentenced to hard labor, and who are transferred from prisons for health reasons, or reaching 60 years of age or for spending the half-term of the sentence or for three years, i.e. the two thirds of the sentence, and their behavior was well.

The Director-General of prisons is authorized to form a committee to evaluate the prison’s authority to transfer the prisoner from the prison, and if the prisoner’s behavior deviated, he may be returned to the prison (limane).

(D) Those sentenced to more than three months’ imprisonment unless the remaining time at which they were sentenced is lower and they have not been previously held in a public prison. 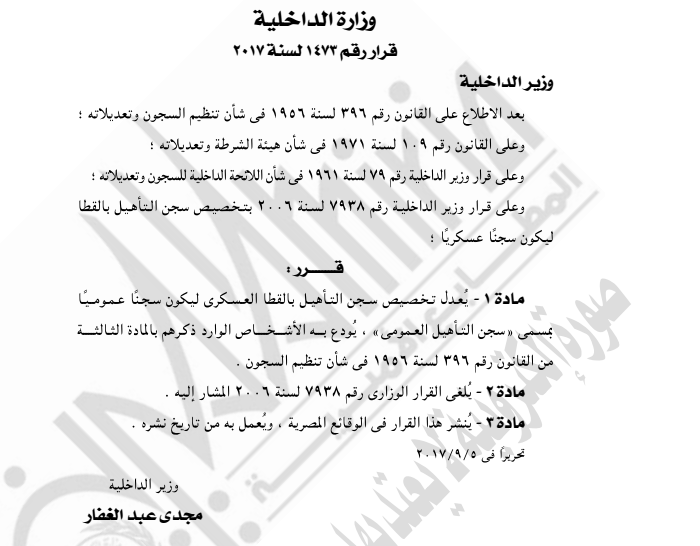