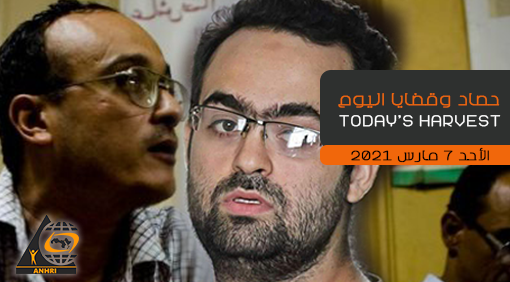 – North Mansoura Criminal Court has considered the detention renewal of activist Mohamed Adel pending Case No. 4118 of 2018 Sherbein Administrative and decided to renew his detention for 15 days.

*The criminal court’s terrorism circuit convened at the counseling room in the Police Cadets Institute has considered the detention renewal of the following:

– Journalists Hesham Fouad and Hossam Moanis and 17 defendants in the Case No. 930 of 2019 State Security;

– Aya al-Qassem Ramdan, Islam Adel, Ahmed Ahmed Abdel-Halim and 76 defendants in Case No. 880 of 2020 State Security, known in the media as “September incidents 2020”;

* Cairo Criminal Court is proceeding with the trial of 12 defendants in the case known in the media as “Hesham Ashmawi Cell”, which was postponed at the session of 4/2/2020.

* Giza Criminal Court’s terrorism circuit is proceeding with the trial of 3 defendants in the case known in the media as “Al-Nahda Sit-in dispersal”, which was postponed at the session of 1/2/2020.

* The Court of Cassation has considered the appeal submitted by the Public Prosecution against the ruling of acquittal issued for 6 officers and 2 low-ranking police officers of the charge of totrturing a citizen to death.

The courts haven’t reached their decisions so far.