This month, March, coincided with the Egyptian presidential election that lasted for three days. The whole protest move was affected, since the accusations of treason, working for other countries, and affiliation to the Muslim Brotherhood group, was waiting for anyone who objected on anything, or tried to organize a group act, not to mention the self censorship put on the social movements on themselves postponing any labor or social protest after the presidential elections was over.

And while group social and labor protests have declined through the month, the individual protests on the other hand have stayed at their normal rate. Also, it is noticed that there is an alarming increase in the number of suicide cases due to poor living conditions for the masses.

The program has monitored and recorded 44 protests this month, of while 14 were professional and labor, and 30 were social. They are summarized as follows: 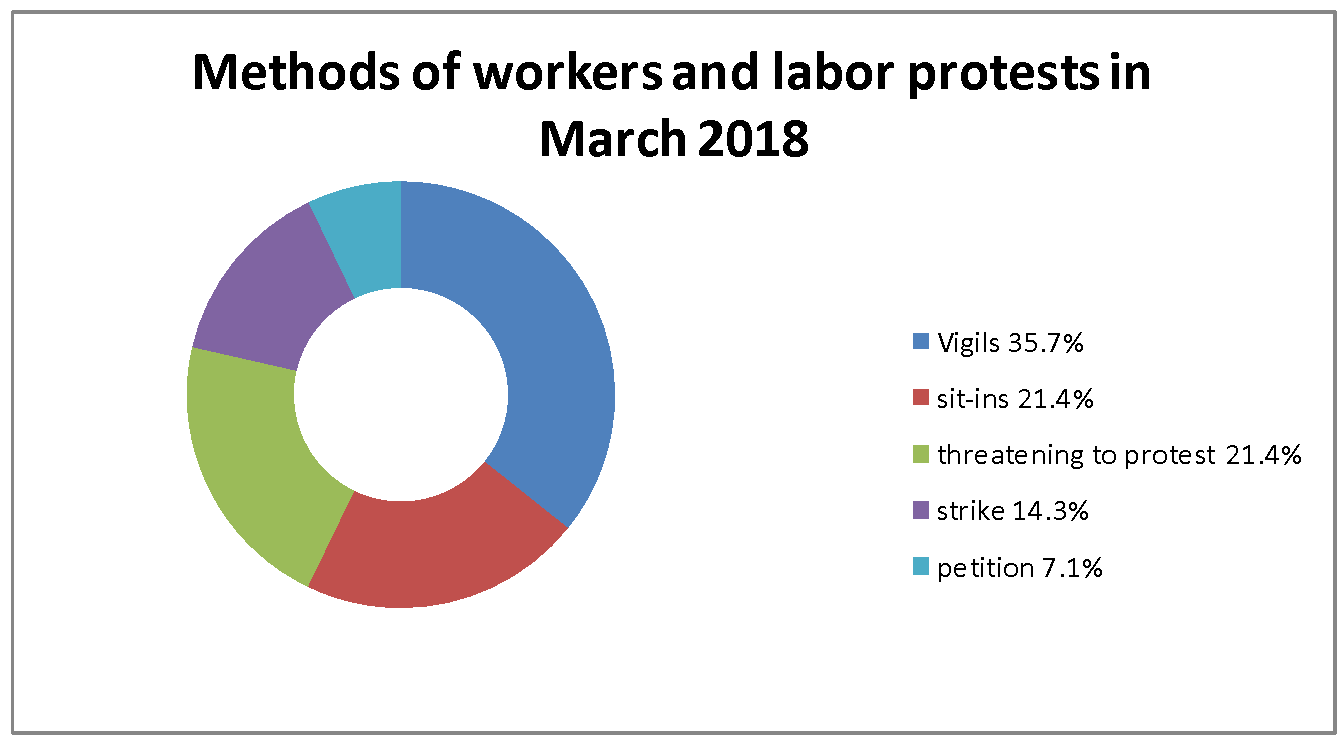 March has witnessed five vigils. The staff at the Directorate of Delegates and Correspondents in the News Sector of the National Information Authority organized a protest march on March 31st, in front of the office of the head of the authority, objecting on hiring Ahmad Wageeh as a general manager for the administration. A number of young people appointed by the Administrative Prosecution Authority organized a protest march on March 5th in front of the building in Nasr City in protest against the suspension of the appointment decision and not handing over their work. On Sunday, March 25th, workers at the Minia Cancer Center organized a protest after the decision to transfer the director of the center and head of the surgery department. A number of employees at one a company specialized in the production of yoghurt and cheese products in Monufia governorate also organized a protest on Wednesday, March 14th, to demand an annual increase rate. Dozens of employees of the Agricultural Development and Reconstruction Projects Authority organized a protest on Monday March 19th demanding a piece of land from the Authority in exchange for their termination of service and early retirement.

March has witnessed three sit-ins. The teachers and students at Shallabi elementary school in Minia have organized a sit-in because of their commitment to the current headmaster of the school. The Water and Wastewater collectors in Assiut governorate entered into an open sit-in since March 4th to demand their right to contracts to guarantee them health and social insurance. Also, Al-Husseini Abdul-Alim Ahmed, a member of the quality education in the educational administration, has entered into an open sit-in inside the administration to demand an investigation with the director of the department for violating Decree No. 13 and 14 of the National Medical Board.

The threat to protest came in third place. On March 9th, a number of lawyers from South Qalioubia threatened to organize a sit-in inside the office of the head of the Qalioub Court of Misdemeanors.

The director of legal affairs at Zamalek club threatened that the employees and workers would strike for not paying their dues due to the crisis that broke out between the president of Zamalek club and the minister of youth and sports.

Workers of the National Cement Company in Helwan on March 14th announced their intention to strike again days after they returned to work because the company failed to fulfill its promises to resolve the crisis and review the decisions.

This month witnessed teachers strike at the elementary school in Abu Rawash on March 29th to protest the assault of a student’s guardian on the headmaster. The workers of the National Cement Company in Helwan continued until March 8th to protest the suspension of incentives, and hold a sit-in with the resumption of work, after the company’s commitment to run the furnaces, and solve the problems of workers.

In March, 300 workers and employees of Misr Real-Estate Management Company, a subsidiary of the Misr Insurance Holding Company, have filed a complaint to the officials of the executive authority after the company refused to appoint them, despite their legal entitlement after passing four years. 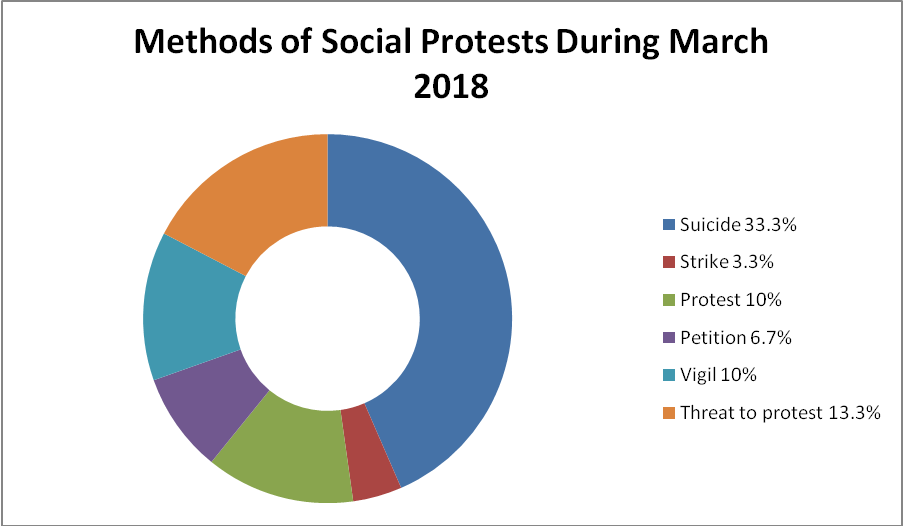 March witnessed 7 cases of protesting for people who suffer from the ramification of ceasing pensions and financial support; those who were harmed by ceasing the dignity and solidarity pensions in Esna, Luxor, construction contractors and apartment owners in Alexandria organized a protest in front of Agami district in protest against the decisions to remove the infringing properties, members of the Egyptian Union of Young Media Journalists organized two protest this month to demand the legalization of the lands of the Union in the oases.

March witnessed 4 threats to protests; some celebrities and leaders of the fans of Ghazl Al-Mahalla sports club, called for a protest against the administration of the club after the deterioration of all its matters. The general trustee of the pharmacists syndicate threats to enter an open sit-in and a strike with the members of the syndicate board. Investors at Sky Light Company for Touristic Development, threatened to organize several protests and vigils. The sub-syndicate of lawyers in Maghagha center, Menia threatened to boycott the fourth court circle for crimes in solidarity with the lawyers at the center who were accused of obstructing the work of a governmental facility, vigils, and inciting chaos and riots without the curt.

3 cases of vigils occurred during March. The people of Manzala city gathered in front of the general hospital, hundreds of extremists gathered in Toud village objecting on legalizing a church named “The Holy Virgin Church”. Also, dozens of people of Helwan gathered in front of Helwan Cement Company against using garbage as an assisting fuel in operating the furnaces and coal mills for the cement industry.

Hundreds of people from Drine village in Daqahlia have demonstrated in front of an old lady’s house who has been a victim of a scam from her neighbor which lead to her getting arrested in KSA for bringing narcotic substances. The primary and preparatory students in Quds School in Ard Al-lowa have demonstrated, and so have the students of Eman Elimentary School in Suez objecting the school’s lack of obligation to have a mother’s day ceremony in spite of gathering 5 pounds form each student for that event.

Two group protests have happened in March through judiciary petitions; Lawyer Hussein Abdullah filed a legal suit against the minister of social solidarity after her decision to cease the solidarity and dignity pension in the villages and centers of Esna, Luxor, and the people of Basrawy district in Imbaba have sent a group complaint to the “Al-Masry Al-Youm participate” number because of the continuous water shortage.

There was only one case of striking in March by the drivers of Minwat village in Giza who enetered a symbolic strike to work demanding the transfer of their stop from under the Munib bridge to a location closer to the subway station.

Third: The geographical Distribution of the Labor and Professional’ Protests during March 2018:

The governorates of Cairo and Giza topped the labor and professional protests during the month of March with 4 protests each, followed by Minia governorate with 3 protests, Port Said and Fayoum came third with 3 protests and Assiut came forth with one protest.

Fourth: The geographical Distribution of the Social Protests during March 2018:

Fifth: The Sector Distribution of the Labor and Professional Protests during March 2018:

Education and scientific research came first in March with 3 protests, and then Justice and chemical industries came second with two protests each. In third place, came the media, journalism, printing and publishing, insurance and banking, nutritional industries, water, sewage and electricity, sports, agriculture, and health with one protest each.

Sixth: The Sector Distribution of the Social Protests during March 2018:

Suicide for poor living conditions topped all forms of protesting during March with 10 cases, but because those who did it came from different professional backgrounds and some of them weren’t given the chance to work, they were labeled as unclassified.

Scientific research and education came second with 4 cases, then followed by security and housing in the third place with 3 cases each.

And at the fourth place were both pension holders and transportation with 2 cases each.

Finally at the fifth place, came sports, justice, tourism, chemical industries, water, sewage and electricity, with one protest each.

It is noteworthy that the number of suicides increased ten times due to the severe economic crisis experienced by citizens and the unemployment that is splitting young people, which threatens social and family stability.