The rule is that trials are held in courts, and courts are under the Ministry of Justice.

In Egypt however, this is not the case, where you can be detained, interrogated and tried in the same place without leaving, and without seeing a court as the place of the public prosecution. It could be a prison, a police cadets training institute, a police academy or a central security camp.

The principle of public hearings is one of the most formal guarantees of fair trial, which requires that the court sit in public hearings, that such hearings be made open to the public, public opinion, and, of course, families and relatives of the defendants.

After the January 25 revolution, and following public pressure to try former dictator Hosni Mubarak, the enormity of the case, or so it seems, was a justification for holding the trial at the police academy in New Cairo.

However, since 2013, most criminal trials of a political nature have been transferred to police headquarters, starting with the trial in the case known as the Shura Council Incidents and the case known as the Abdeen Court Incidents; in which trial sessions were held inside the Police Cadets Institute in Tora, alleging that some citizens have attacked courts and out of fear of assaulting judges.

Although official and security agencies have confirmed the stability of the security situation, trials of a political nature continue to be held in police facilities so far . The rule now is to hold trials at the Ministry of Interior’s facilities, and the exception is to hold trials in the courts.

In this paper, we try to clarify the shortcomings of the trials held within police facilities under the Ministry of Interior’s jurisdiction and to link them to the constitutional, legislative and international framework for the idea of public trials. We then shed light on practical cases of trials in police facilities and the atmosphere of such trials, along with elaborating the legislative text in the Terror Act, to prove the conflict between trials held in police facilities with the above mentioned principle and to explain the reasons for such a contradiction, which loses the trial elements of justice and definitely violates constitutional rights guaranteed to the defendants, primarily the right of litigation and defense and the imperative non-discrimination between defendants and their equal access to such rights.

First: The absense of the guarantee of a public trial inside police facilities:

The principle of public hearing guarantees the right of every individual to attend a trial without any conditions, restrictions or obstacles, unless it disrupts public order of public morals, such right is to enable the public to observe the trial proceedings, to be familiar with them and to take advantage of the proceedings, discussions and pleadings taking place in the trial. The exception, according to the articles of the Constitution and the laws, are those concerning the privacy of families and relatives, for example.

The Constitution of 2014 consolidates the principle of public trial in article 187 “Court sessions shall be public, unless the court decides on its secrecy to safeguard public order or public morals. In all cases, court judgments shall be pronounced in publicly held sessions.”

The Civil and Commercial Procedure Code also provides for the same concept in article 101 by stating that “The pleading shall be public except if the court decides, on its own initiative or upon request of one of the litigants, to conduct it in secret in order to preserve public order or to respect the morals or the sanctity of the family.”

The Code of Criminal Procedure states in Article 268 that “The hearing must be public, the court may, however, observe public order or preserve morals, order that all or some of the proceedings be heard in a secret session or prevent certain categories from attending”

The principle of public trials is not only a guarantee for the defendant but also for the public, since the public proceedings make public opinion act like an observer to the judiciary. This has a two-fold benefit; on the one hand, public scrutiny of justice provides trust in its integrity, and on the other hand it helps promote the concept of public deterrence.

The absence of the public aspect in the trials held at police facilities is made clear as many of the families of the defendants, the public, journalists and the media are prevented from attending the hearings by security forces, which undermines the very concept and renders it void of its meaning in total contradiction to the provisions of the constitutional and legislative texts.

Second: Putting the defendants inside a glass cage and preventing them from their right to defense and contacting their lawyers:

It is often the case that defendants facing trial in courtrooms at police facilities (such as the Police Cadets Institute or the Police Academy) are placed inside iron cages with sound proof glass that prevent the defendant from communicating with his/her lawyer and may also prevent him/her from hearing the proceedings of his/her own trial, which is a severe violation of the right to present a defense whether in the form of self-representation or through a lawyer, as well as the right to be aware of the proceedings of the trial, including: the hearing of witnesses, the opening of sealed evidence and the defense pleadings in accordance with the Constitution and the law, and also in line with international covenants and conventions such as the Universal Declaration of Human Rights.

In the same sense, the International Covenant on Civil and Political Rights states that “Everyone shall be entitled to a fair and public hearing by a competent, independent and impartial tribunal established by law.”

As we read through the texts of the Constitution and the law as well as the international covenants and conventions, we find that they all insist on the principle of public hearings as a basic guarantee for a fair trial, and when we apply these legal rules to the trials that take place inside police facilities, we find that it lacks the mentioned principle, as most trials are held in absence of defendants’ families, the public and journalists because security forces prevent them from entering the facilities under their control, in addition to preventing the defendants from communicating with their lawyers or hearing proceedings against them because of the glass cages that separate them from their lawyers on the one hand and from the judges on the other.

Third: Where most trials of a political nature are held:

There is a court inside Giza Central Prison. There have been numerous trials, including the case known as the “Juma’a al-Ard- The Land Friday” case, which took place in the Dokki and Al-Ajouza districts at the first and appellate levels.

In that case, the family members and relatives of the defendants, as well as the journalists and media, were prevented from attending the trial and only the lawyers of the defendants were allowed to enter the courtroom.

The courtroom also placed a glass cage, which made the lawyers unable to communicate with the defendants, and consequently, the defendants were unable to hear the case of their lawyers.

There are three courtrooms in The Police Cadets Institute in Tora. Most of the trials are political in nature. The most well-known of these trials are “The Dispersal of Rabaa sit-in”, “Mazalim West al Balad or the Oppressed of Downtown”, among other trials, let alone the detention renewal hearings that also take place at the same institute.

At the mentioned facility, family members of the defendants, their relatives and journalists are not allowed to be present except by a decision of the Head of the Court, either to allow or to ban entry, even though the hearing is public, yet the decisions of the head differ according to the case and without justification for either allowing or banning. For instance family members of the defendants  as well as journalists were allowed to attend “The Dispersal of Rabaa sit-in” case, while the judge refused to allow the families in the case of “The Oppressed of Downtown” without giving clear reasons.

In addition to preventing families and journalists from attending the sessions, all courtrooms were equipped with sound proof glass cages to prevent communication between lawyers and defendants. Moreover, the lawyers are subjected to extensive patdown and frisking by the security forces and they are allowed in after registering in the security book and obtaining an entry permit to attend the hearings.

There is a court inside the Police Academy, and there have been many trials of a political nature conducted there, including the case known as “The Cabinet Incidents”, “Kerdasa Incidents” and other cases

Security forces prevent family members and relatives of the defendant, as well as the journalists and media, from entering and attending all the trial sessions. Only the lawyers of the defendants are allowed to attend.

This prison was inaugurated in June 2015, it includes several cells for prisoners and halls to renew their detention for the convenience of prosecutors and the judiciary, but the court prevents many family members from attending interrogation and imprisonment renewal sessions of their relatives. Moreover, those held there in pre-trial detention, do not feel safe during the interrogations, as it is under the Ministry of Interior’s custody.

Fourth: The migration of justice, from the courts to the Ministry of Interior

Apart from trying civilians before the military courts and the lack of fair trial conditions in that process, ANHRI documented that the Ministry of Justice courts had only about 26% of the trials, while police facilities under the control of the Ministry of Interior had about 74% of the trials documented by ANHRI in one year, from May 2017 to May 2018, as follows: 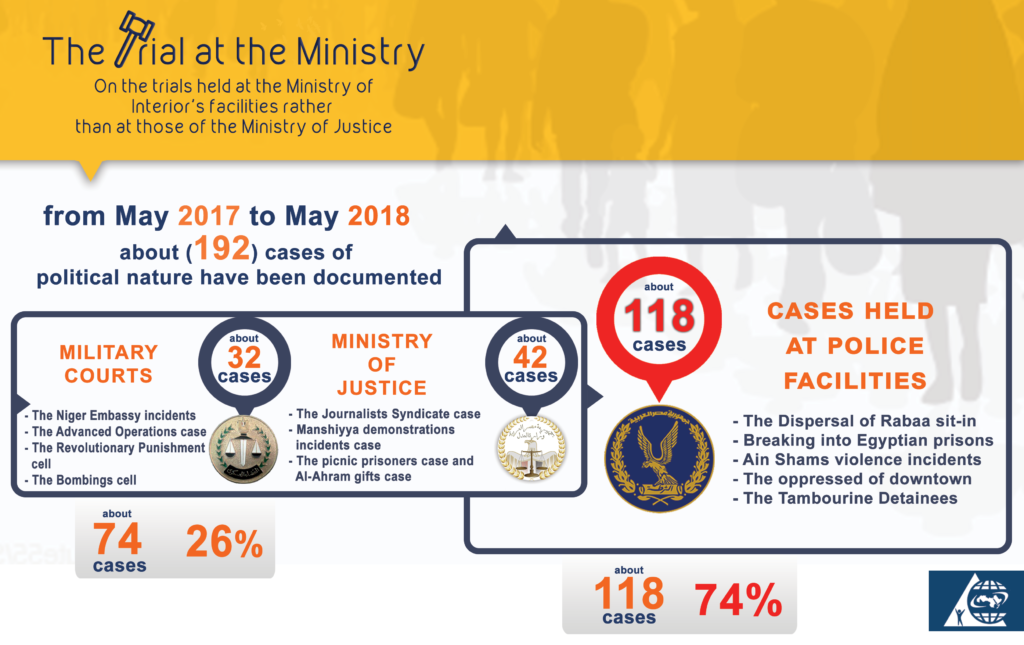 The principle of public hearings is one of the basic guarantees of a fair trial, the law allows the court to decide the secrecy of sessions, as an exception in limited cases, which are “due regard to public order, public morals or the sanctity of families” and these are exceptions that should not become the norm or expanded further.

Nonetheless, the exception became a rule, and the rule became an exception, as most political trials take place inside police facilities, where family members and journalists are prevented from entering the courtroom, which is a violation of fair trial.

The absence of the principle of public hearings in criminal trials of a political nature is flagrantly incompatible with the principle of equality in both right to litigation and defense, and with the need to try people in accordance with fair trial procedures without discrimination.

The wasting of constitutional rights is complemented by the intransigent security measures against lawyers by security forces based in police facilities, (including frisking, banning mobile phones in many cases, and restricting the entry of the session to only those who obtain a security clearance).

First: – Taking courts from police facilities back to their natural places.

Second: Removing the sound proof glass barriers of the cages in which the defendants are held during trial to enable them to communicate with their lawyer and follow up the proceedings of the trial.

Third: – Taking all necessary measures to facilitate the participation of family members, journalists, media and the public in court hearing sessions.

Fourth: Introducing amendments and revisions to the laws in accordance with the articles of the Constitution, international covenants and conventions on the necessity of public hearings and restricting expansion in exceptions.