Freedom of Expression for Labor and Social Movements program

The program of Freedom of Expression for Labor and Social Movements of the Arabic Network for Human Rights Information (ANHRI) documented during the month of August 2018: 38 protests, out of which 9 were labor and professional protests, while 29 were social protests, summarized as follows: 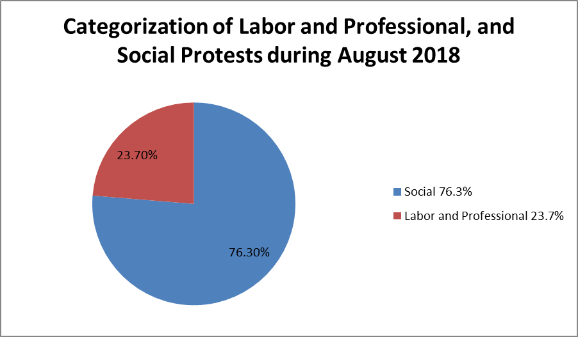 During August, the program monitored 9 labor and professional protests, detailed as follows:

Striking came first among labor and professional protests in August with four cases:

August witnessed 2 cases of threatening to protest, as follows:

August witnessed the use of petitions and complaints twice, as one of the means of protest where:

The Directorate of Manpower in Sharqia formed a committee that contacted the chairman of the company to resolve the issue amicably, and the latter agreed that he had no objection to the entry of workers to their work and that he would pay the remaining salaries by August 13th, as well as the late overdue wage.

August witnessed one vigil where:

During August, the program monitored 29 social protests, detailed as follows: 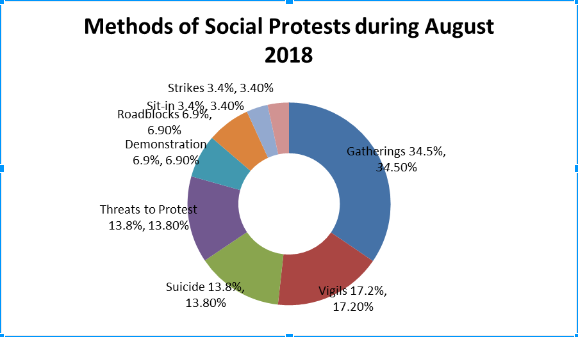 The gathering came at the top of the social protests for the month of August by 10 cases of summarized as follows:

August witnessed four cases of threatening to protest, where:

The governorate of Beheira topped the labor and professional protests during the month of August by two protests, and each of (Sharqia, Gharbia, Menoufia, Damietta, North Sinai, Marsa Matrouh, Alexandria) came in the second and final place with one protest each. 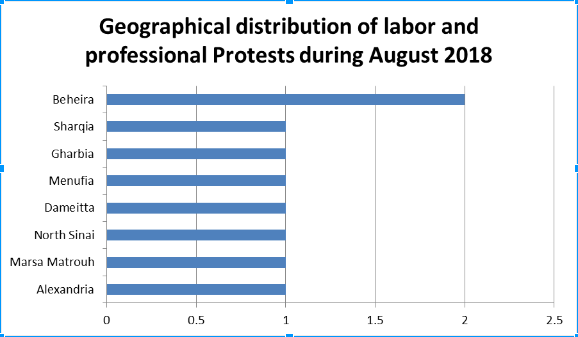 Cairo topped the social protests by 5 in August, and each of Alexandria and Daqahlia came second with 4 protests each, while Sharqia and Giza in the third place with 3 each, and Assiut came fourth place with 2 protests. Finally; Luxor, Gharbia, Fayoum, Qalubia, Minia, Kafr El-Sheikh, Beheira and others ranked fifth with one protest each. 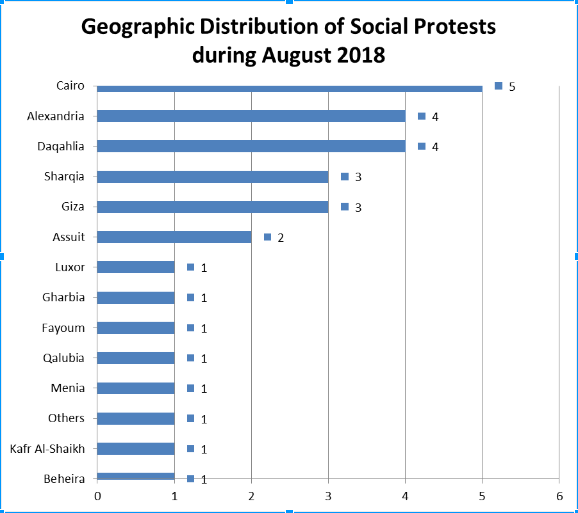 Sports topped all sectors in terms of the number of labor and professional protests during the month of August by (3) protests.

In second place came spinning and weaving with 2 protests.

In the third and final place came the sectors of metal industries, transport, education, scientific research, and health, with one protest each. 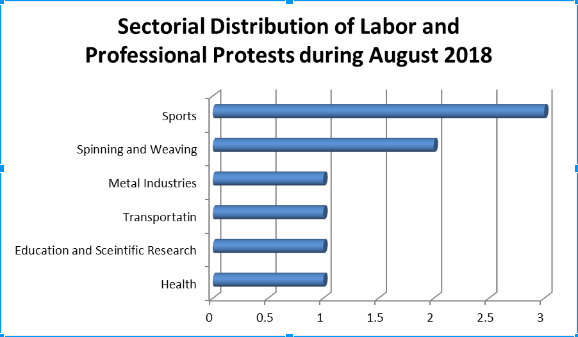 The security sector topped all forms of social protests during the month of August with 8 cases of protest.

The sports sector came in second place with 6 protests.

Suicide and attempted suicide due to poor economic conditions came in third with 4 suicides this month.

Education and scientific research came in fourth with 3 protests.

In fifth place came the sectors of transport, communications, water, sanitation and electricity, with 2 protests each.

While the sectors of localities, justice, commerce, and lawyers, ranked sixth and final by 1 protest each. 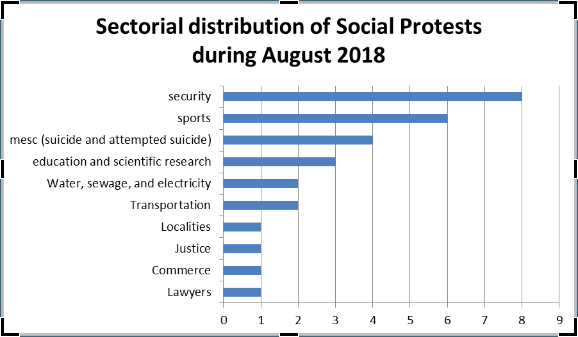 The number of protests in August was less than in previous months and that is may be due to fear of publication after the expanding issuance of laws that penalize opinion-leaders.

It can also be attributed to the pilgrimage season, Eid al-Adha holiday and public holidays for many government departments during this month, as well as the high temperature.

While the labor protests have spread to almost 8 governorates, we find that the social protests were concentrated mainly in Cairo, Alexandria, Daqahlia, Sharqia and Giza.

The program monitored the activities of extremist groups in Upper Egypt; as they threw stones at the churches; amid the disregard of the security services for the escalation of events in the governorates of Menia, Luxor and Assiut, and ignored the screams and calls by church leaders.

Those events did not come out of nowhere, but their introductions were evident through the follow-up of the events of the past months.

It was also clear that there was a indifference with those events and the equality between the perpetrator and the victim by the security authorities, while anyone who expressed an opinion or objected to a political decision was jailed[1].

This is accompanied by a state of media blackout on many of the events that we believe were the result of security alerts that determined the availability and the way of dealing with the media.

This blackout coincides with the adoption of Law No. 175 of 2018, which works to confiscate the public domain and muzzle the mouths and deprive citizens of their right to express their opinion.

We can say that the social conflict takes place away from the official institutions as it did not find in the current political and organizational arenas the honest representation, and if the existing authority can today control this conflict and control the parties, we believe that there will come a day when things will get out of control, and at the end it is the citizen who will pay the price of a repressive power that has confiscated all political and economic rights[2].

Freedom of expression for Labor and social movements Program

[2]              The report is based on a number of sources: field monitoring of the program of freedom of expression of Labor and social movements, labor issues conducted by ANHRI, in addition to several paper newspapers and websites (Al Watan, Al Masry Al Youm, Al Wafd, Masrawy, , Youm-7 and others)