He posted it himself “I’m getting arrested”, so will the Public Prosecutor take action? Prominent cartoonist Ashraf Hamdy arrested 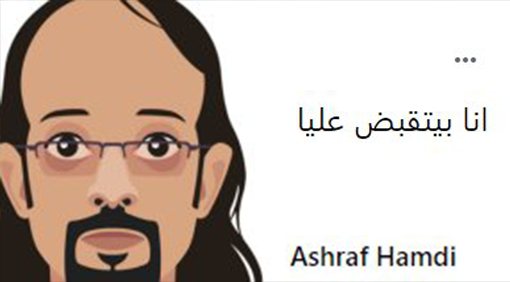 The Arabic Network for Human Rights Information (ANHRI) said today that prominent cartoonist “Ashraf Hamdy” has announced himself, that he was getting arrested at dawn this morning; as he posted on his Facebook account “I’m getting arrested”, in the first few minutes of the 10th anniversary of the 25 January Revolution, which also marks the National Police Day, as if the police apparatus refuses to let the anniversary of the Jan. 25 revolution pass without leaving a bad impression and new evidence of its ongoing police approach coupled with the phenomenon of impunity.

The arrest of Ashraf Hamdy, a dentist, a well-known cartoonist and the founder of the Youtube channel “Egyptoon” which has over 250 million followers, comes to add further evidence on the escalating crackdown and the arrest campaigns carried out by the Ministry of Interior. This police crackdown aims to deepen the climate of fear among citizens, on the one hand, and to suppress all dissenting voices and pens that are not in line with the path of oppression and tyranny in Egypt on the other hand. It also underlines Egyptian authorities’ hostility to freedom of expression and creativity.

Ashraf Hamdy, who previously worked as a cartoonist for the government-owned “Sabah Al-Khair” magazine and the “Masrawy” news website, is known for his animated videos which provide social criticism through the cartoon character “Emon Al-Majnoun” or (Crazy Emon). He didn’t engage in any political or partisan activity and doesn’t have any political affiliation. His main concern, rather, is to draw a smile on the faces of Egyptians who are suffering and groaning under the weight of the police siege in the absence of the rule of law.

ANHRI’s Executive Director Gamal Eid said:“We hope that the Public Prosecutor stands up to such a crime and police approach. Ashraf Hamdy, who revealed his arrest in a Facebook post, is an artist who doesn’t know anything but his paintbrush, coloring pens and keyboard. His arrest in such a police manner on the anniversary of the Egyptians ’revolution against police practices clearly indicates that the Police has not changed and that such a police approach is an inherent characteristic of the police apparatus in Egypt. So will the Public Prosecutor take action and assume his role in protecting the law and the freedoms of citizens?”.