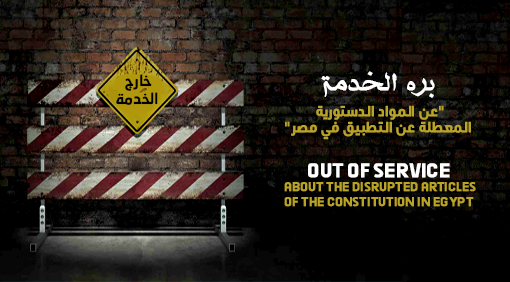 The constitution is the father of laws. It is the social contract that is binding for all governments and regimes all over the world; since it represents the basic legal reference for the legislative system. There are many ways       and various aspects to ensure respect for constitutions, including, for example in Egypt, the establishment of a higher court that oversees the compatibility of laws and regulations with the rules and provisions entailed in the Constitution.

The majority of the world’s regimes are keen on ensuring that their laws and measures are consistent with their constitution, even if it is theoretically or hypothetically made.

The actual implementation of the Egyptian constitution, which Egyptians overwhelmingly approved with 98.1% voting in favor, as a result of the state’s mobilization of all its capabilities to urge citizens to vote for it, triggered a totally different picture than the assumed one, although the vote was conducted upon its desire and approval.

In other words, many of the Constitution’s articles have been disrupted by the government, whether intentionally or unintentionally.

This can be explained in light of the President’s statements in 2015, when he said in a speech “The Egyptian constitution was very ambitious and great, but it needs more time to become effective.”

This may be an explanation, and there may be others. But in practice, the disruption of the constitution’s articles, no matter how many articles are disrupted (even if it is only one article), constitutes a flagrant deficiency and a gross violation that requires urgent reform and amendments.

In 2019, a new amendment was introduced into the Egyptian constitution. These amendments were made to some articles pertaining to presidential terms among some other articles, while no measures had been taken to fix these disrupted articles or even put them into force.

This paper provides some examples of the Egyptian Constitution’s disrupted articles in an attempt to shed light on the breach of what is known as the father of laws. These examples include but not limited to the below sections.

Examples of the disrupted articles in the Constitution:

According to Article 18 of the Constitution, the state commits to allocate a percentage of government expenditure that is no less than 3% of Gross Domestic Product (GDP) to health. The percentage will gradually increase to reach global rates (about 7%).

Here we are talking about a commitment and “obligatory” percentages that should gradually increase. However, since the Constitution took effect 7 years ago, the government hasn’t committed to this percentage.

In the previous fiscal year 2019-2020, the percentage of the government expenditure on health didn’t exceed 2%. (2)

Personal Freedom, arrest and inspection (Article 54 of the Constitution)

Article 54 of the Constitution establishes some of the guarantees related to investigation, including that: 1- All those whose freedoms have been restricted shall be immediately informed of the causes therefore, notified of their rights in writing; and 2- be allowed to immediately contact their family and lawyer; and 3- be brought before the investigating authority within twenty-four hours of their freedoms having been restricted. 4- Questioning of the person may only begin once his lawyer is present. If he has no lawyer, a lawyer will be appointed for him….

This article may be the most disrupted article in the Egyptian Constitution; since the violations commonly committed nowadays in contravention of its provision have become well known, not just to those working in the legal sphere but also to the common people. Among the thousands of prisoners of conscience being detained in Egypt, none of them was informed of his/her rights in writing. The Prosecution, itself, is not paying attention to this article and there isn’t even the slightest concern about implementing it. It has become merely ink on paper.

Undermining freedom of movement (Article 62 of the Constitution)

This articles guarantees and respects the right to freedom of movement, residence and emigration; as it states that “no citizen may be expelled from state territory, or banned from returning thereto or from leaving it, except by a causal judicial order for a specified period of time”.

However, anyone concerned can monitor the manifold violations of this right and the deliberate disruption of this article; given the travel ban orders issued by courts against many people and for a long period of time, such as the case of political activist Asma Mahfouz whose travel ban exceeded seven years, as well as Case No. 173 of 2011 known in the media as the “Civil Society” case, which involves many human rights defenders who are banned from traveling for a period that exceeds five years.

Aside from court decisions, there have also been many cases of bans that are not based on judicial orders, such as the illegal police orders issued against media professionals, human rights defenders, politicians and those who are somehow concerned about public affairs, leaving the Constitution disrupted and obstructed as a result.

Undermining the free flow of information (Article 68 of the Constitution)

This article stipulates that “Information, data, statistics and official documents are owned by the people. Disclosure thereof from various sources is a right guaranteed by the state to all citizens. The state shall provide and make them available to citizens with transparency”, while it refers to a law that shall organize rules for obtaining information as well as rules for depositing and preserving it, and lodging complaints against refusals to grant access thereto. The law shall specify penalties for withholding information or deliberately providing false information.

But in reality, and since the Constitution came into force in 2014, no law has been issued so far in this regard.  The right to information hasn’t been enforced yet and the situation remains the same, in spite of the efforts exerted by many civil society organizations to introduce draft laws that regulate this right. Alternatively, a new accusation “spreading false news” has surfaced in various investigations related to public affairs that it has become common in different cases.

Where is the President’s financial declaration? (Article 145 of the Constitution)

This article stipulates that the President of the Republic must submit a financial disclosure upon taking office, upon leaving it, and at the end of each year. The disclosure is to be published in the Official Gazette.

Although some media professionals close to the government claimed that the President had submitted his financial disclosure, the Egyptian Official Gazette hasn’t published any official disclosure for seven years, and consequently, the article has been forgotten and covered in dust at the time of writing this report.

Undermining the right to defense, the arrest of lawyers (Articles 98 and 198 of the Constitution)

The right to legal defense is one of the constitutional rights stipulated in Article 98, either in person or by proxy, and since this legal profession is practiced by lawyers, the article ensures the independence of attorneys and the protection of their rights as a guarantee for the right of defense.              And to consolidate this right, the article also guarantees the right of those who are financially incapable to defend their rights.

Furthermore, Article 198 explicitly prohibits arresting or detaining lawyers while exercising their right of defense other than in cases of flagrante delicto (when the suspect is caught in the act of committing the offense), which doesn’t happen on the ground and thereby the article, like its predecessor, has been abandoned and obstructed.

Therefore, if we monitor the extent to which this right is respected nowadays, whether in State Security investigations that are conducted in the absence of lawyers in most cases or in the many other prosecutions, we will find that the aforementioned articles are nothing but a mere neglected text or provision. The matter has even reached the point where lawyers are arrested while carrying out their work, such as the case of lawyers Mahinour El-Masry, Mohamed El-Baqer, Amr Imam and many others.

The National Council for Human Rights (NCHR), the lifelong council (Articles 214-217 of the Constitution)

The Egyptian National Council for Human Rights (NCHR) was established in 2003 upon Law No. 94 of 2003, which was amended by Law No. 197 of 2017 granting NCHR a substantial independence; as the approved amendments included abolishing its subordination to the state’s Shura Council. Also, articles from 214 to 217 in the Egyptian Constitution guarantee the independence of NCHR stipulating that its members shall be appointed every four years (for a term of four years). However, despite the fact that the last formation of the council’s board was in 2013, we haven’t seen any decision with regard to NCHR’s formation and the appointment of its members so far, meaning that the council has exceeded its 4-year legal term, and its seems that these constitutional articles will not be implemented in the near future as well.

The absent transitional justice (Article 241 of the Constitution)

Despite the clarity of (Article 241) on transitional justice, which obliges the House of Representatives in its first session after Egypt’s Constitution of 2014 comes in force (i.e. in 2015), to issue a transitional justice law that ensures: 1- revealing the truth, 2- accountability, 3- proposing frameworks for national reconciliation, and 4- compensating victims, in accordance with international standards, the parliament was elected and its full term ended without introducing this law in disregard to the article’s obligatory provisions and time-limited regulation, to the extent that the so-called “Ministry of Transitional Justice” has completely disappeared and became forgotten!

Consequently, this article, in spite of its importance, has remained merely ink on paper in the highest and most prestigious legal document in Egypt (the Constitution), taking into account that it initially aimed at ending the national rift by suggesting frameworks for national reconciliation in a way that would pave the way for creating a positive atmosphere that would ultimately reflect on society. Unfortunately, and after nearly seven years, this didn’t happen and the situation remains unresolved as a result of neglecting such respectable articles.

Municipal elections (Article 242 of the Constitution)

The Egyptian Constitution regulates local/municipal administration (from Articles 175 to 183). These articles stipulate that the state is divided into local administrative units and every local unit elects a local municipal council by direct, secret ballot, and each council has its specific competencies and independent budget, adding that it is prohibited to dissolve local councils as part of a comprehensive administrative procedure.

The Constitution also provides that the existing system of municipal administration shall continue to be in force within a period not exceeding five years, which already ended in 2019.

It has been 7 years since this period came to an end, and the government hasn’t yet issued the law on implementing these constitutional articles nor has it held the local council elections until the moment, as the state is still wobbling on the matter; sometimes it announces the introduction and discussion of the law and thereby setting a date for local municipal elections and at other times it postpones the consideration of all such procedures. But more importantly, which the main idea of this report, there are major articles and provisions in the Egyptian Constitution that are currently obstructed.

Constitutions are not deaf texts, but rather a will of a nation that the government and all “legislative, executive, and judicial” authorities must protect by working diligently to respect and maintain its provisions.

Therefore, there is no way for engaging in the state of law except by adhering to the constitutional provisions that the government has sworn to respect and obey. Enacting a law on municipal administration elections is a necessity, empowering lawyers and implementing the constitutional provisions that provide fundamental guarantees to the accused is a matter of urgency. Furthermore, maintaining the constitutional rights entailed in Egypt’s Constitution requires not only that they be legalized, which is not achievable in the country, but also that they be respected and become commonplace nationwide, thus deepening commitment to the Constitution’s provisions.

It is incumbent upon all states and nations to respect constitutional rights.

Respecting constitutional provisions the government sworn to protect paves the way for implementing the rule of law.