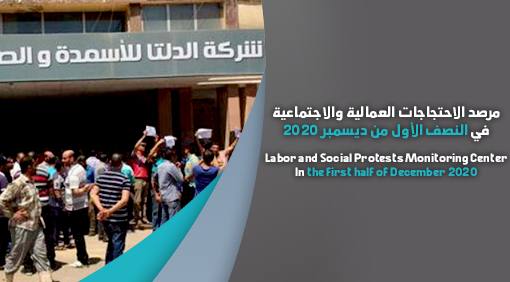 The Labor and Social Protests Monitoring Center monitored 17 protests, ranging from vigils to gathering and suicide cases, which took place during the first half of December 2020.

These protests were distributed geographically to a number of governorates all over Egypt, but Cairo continued to top the list, followed by Alexandria and Qalyubia among the 11 governorates that witnessed the protest cases.

Among the protest cases being monitored:

1- Cases of suicide and self-harm for economic reasons:

Three cases of suicide, including two cases of self-harm, were reported:

Five cases of gathering were monitored during the reporting period, which were distributed geographically on the following governorates: (Aswan – Beheira – Cairo – Gharbia – Giza):

The center monitored two cases of strikes in Qena and Qalyubia governorates:

The center monitored a sit-in case which took place in Dakahlia governorate; as hundreds of workers of the Talkha Fertilizer Company staged a sit-in at the company’s premises after news were leaked reporting the selling of the company due to the increasing losses and the layoff of its workers. Negotiations between the workers and the company’s administration failed as well. The sit-in is still underway for the 13th day in a row.

One case of unfair dismissal was monitored in Cairo; as Al-Masry Al-Youm newspaper decided to dismiss 40 journalists, after the administration chose them either to resign or to be dismissed.