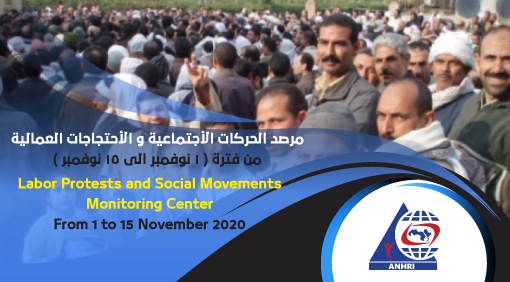 The Labor Protests and Social Movements Monitoring Center monitored 16 protests, including 10 social protests in addition to 6 labor protests during the reporting period, which witnessed a significant escalation in demands for the right to work and the right to housing.

Surprisingly, this period witnessed the emergence of new protest sectors which have neither political affiliation nor union or labor connection, as they spontaneously come up.

Each of ‘the health sector – private sector employees – business sector workers- railway drivers – the farmers and peasants’ sectors, with one protest number.

Cairo came at the forefront of the list of the protesting governorates with 4 protests, which is the highest among all governorates, followed by Alexandria governorate with three protests.

In third place, each of Giza and Dakahlyia governorates shares two protests for each;

Followed by the governorates of ‘Kafr El Sheikh – Port Said – Minya – Qena – Suez’ with one protest per each.