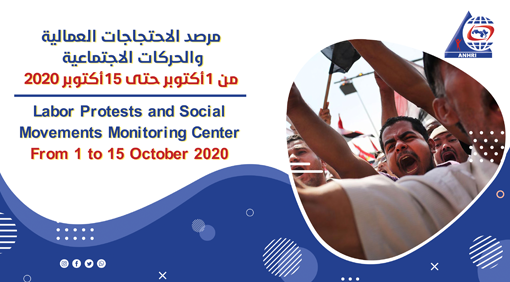 The Labor Protests and Social Movements Monitoring Center monitored 12 protests, including 7 labor and professional protests in addition to 5 social protests, during the first half of October 2020.

The reporting period witnessed an upsurge in labor protests in more than one sector objecting to the new Unified Labor Law. For example, a number of trade union committees of companies affiliated with the business sector issued statements rejecting this law because it encourages the layoff and dismissal of workers.

“Strikes” topped the list of labor protests took place from 1 to 15 October 2020, followed by “threatening to strike” cases, then by “suicide” cases in third place.

Threatening to stage a sit-in

The ‘employees and state workers’ Sector topped the list of protesting sectors with 4 protests, followed by the ‘metallurgical and security’ sectors with 2 protests each, then came the ‘Education, spinning and weaving- the insurance and banking- sports’ sectors in third place.

Cairo came at the forefront of the list of the protesting governorates with 6 protests, which is the highest among all governorates, followed by Giza with two protests.

In third place, each of (North Sinai – Gharbia – Fayoum – Sharqyia) governorates shares a protest for each.