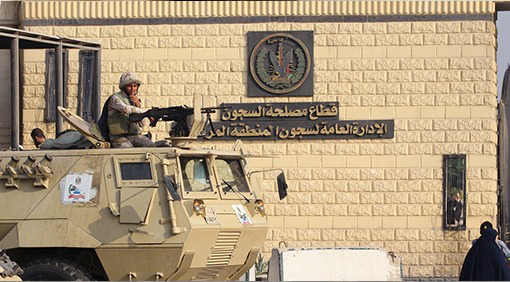 The undersigned human rights organizations categorically reject the continued policy of humiliation practiced by Egyptian authorities against detainees, especially political prisoners. Such policy will only lead to more negative consequences as a number of detainees in the Istiqbal Tora prison, south of Cairo, have started a hunger strike to object to the prison administration’s mistreatment of two of their colleagues.

The organizations have received confirmed information from their sources that the detainees already started their hunger strike on Sunday and refrained from eating the daily food supplied by the prison administration, despite their almost entire reliance on it due to the precautionary measures imposed on prison visits after the outbreak of the Covid-19 pandemic. In the event that visits are allowed, the quantities of food allowed to enter are relatively small, which threatens the lives of detainees due to the shortage of food, especially the elderly, patients with chronic diseases or those with deteriorating health conditions.

The sources indicate that 75% of the cells in Istiqlal Prison in the Tora Prisons Complex have taken part in the hunger strike (the entire “A” cell, except for 4 cells, 70% of the “B” block, 50% of the “C” ward and the entire “D” block). The detainees also confirmed their hunger strike in an official record on 11 October.

The prison administration assaulted two detainees with electric shocks in early October, and decided to transfer them to the disciplinary cells, after stripping them of all their clothes except for their underwear. The prison administration has also emptied all prison cells and wards of everything in them (food, drinks, basic supplies such as mattresses, blankets, buckets of water, fans, and even the detainees’ clothes), leaving only one set of clothes for each detainee. The prison administration also prevented sick cases from leaving their cells to go to the clinic, closed the exercise yards, and the place designated for the purchase of food and drinks (also known as the canteen), and has not been allowing the detainees to go out for family visits except after they were handcuffed.

According to sources from inside the prison, the demands of the detainees include the presence of the prison’s public prosecution to investigate proofs of ill-treatment against detainees and proofs of the abuse of their colleagues with electric shocks as well as their removal from disciplinary cells; allowing exercise; going to the clinic when needed; opening the canteen; and returning belongings seized, and not handcuffing the detainees during family visits.

In this context, the signatory organizations confirm the legitimacy of these demands, and reject these arbitrary measures by the prison administration. The organizations consider that these arbitrary measures come as a reaction to the incident of the execution ward in Scorpion Prison three weeks ago, which witnessed the killing of four detainees on September 23. The detainees, on death row at the time, were murdered inside prison after Egyptian security forces claimed that they tried to escape. Four members of the security forces, including a senior officer, also died.

The organizations stress that such arbitrary measures may be a prelude to a heinous crackdown against political detainees, amid actual news of the start of similar campaigns in several other prisons. Therefore, the undersigned organizations support the detainees’ right to express their legitimate demands in a humane manner and to express themselves regarding the abuse they suffer. We also call on the National Council for Human Rights to intervene and activate its tools to work to protect detainees.

The organizations call on Egyptian authorities to open a serious investigation into these arbitrary measures against the prisoners in Istikbal Tora Prison, to find out the motives that led to the detainees’ hunger strike, try to remedy them, and find a proper means of communication with those detained to meet their legitimate demands. We also call on authorities to respect the detainees’ basic rights enshrined in international covenants and treaties which Egypt has signed, but remained ink on paper due to the lack of political will to implement them.