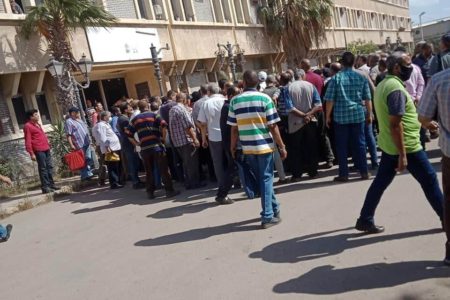 Suicide cases due to the poor economic conditions and labor strikes came at the forefront of the protesting method during the reporting period, which witnessed three cases of suicide as follows:

On 31 July, a young man, named M. Mostafa committed suicide by hanging himself using an iron fence on a street in the city of Ras Gharib in the Red Sea Governorate, after passing through a financial distress. On 29 July, Ahmed A, 38, a resident of Mahdia city at Sharqyia Governorate and an owner of a workshop for marble cutting and manufacturing, killed himself after he had been in a bad psychological state due to financial difficulties. Also on the same day, on 29 July, a driver (named M.S.A), 34, committed suicide by gunfire in his bedroom in Manshiet El-Horreya city at Shubra El-Kheima, Qalyubia Governorate, after passing through a psychological crisis for not being able to find a job.

The reporting period also witnessed three labor strikes, followed by sit-ins and gatherings with two cases each, and only one protest case.

The most important protests:

The reporting period witnessed a number of important protests in terms of the number of their participants. On 16 July, 850 workers at the Velocity Jeans Company located in the Public Free Zone, Ismailia governorate, staged a protest demanding the disbursement of July wages and other allowances before the Eid Al-Adha vacation. Also, more than 400 workers at the Meridian Heliopolis Hotel staged a sit-in on July 28, after announcing that the hotel will be sold, for fear of losing their rights and jobs.

Similarly, on July 18, a large number of workers of Al-Nasr Castings Company in West Alexandria gathered in front of the company, which is located on Umm Zgheo Road in Al-Amaria, to demand the payment of their late incentives.

Furthermore, workers at the East Delta Passenger Transport Company in Suez launched a labor strike on July 20, in cooperation with all the company’s lines and branches between Suez and the neighboring governorates of Beni Suef and Gharbyia, in objection to the company’s procrastination in disbursing the incentives as followed since 2012, among other demands.

The protests took place during the reporting period were concentrated in “Other” sectors owing to the deteriorating economic conditions, followed by the “transport and communications” sector by three cases, then came the “textile” sector came in the second order with two cases,  then came the sectors of (tourism, chemical industries, and metal and engineering industries) with one protest each.