Labor and Social Protest Index in 3 months: March, April and May 2020 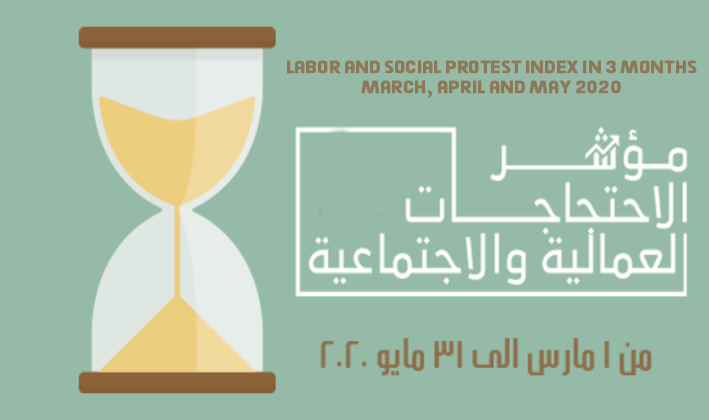 The Coronavirus (Covid-19) pandemic stimulates incidents and inflames protest movement in Egypt. Some of the protests are organized out of a state of awareness; like that staged by medical workers demanding to provide them with health care and necessary protective equipment amid the spread of the virus, and the social workers’ protests denouncing their arbitrary dismissal from work. Other protests were driven by the survival instinct, such as the ones organized to pray for the coronavirus crisis to come to an end, and the one protesting the burial of a female doctor, who had tested positive for the coronavirus, in her village’s graves.

Protests escalated during the month of April and most of them were concentrated in the governorates of Giza, Cairo, Alexandria, and Menoufia.

ANHRI’s Freedom of Expression for Labor and Social Movements Program monitored (74 protests) during the months of March, April, and May 2020.  Out of these protests there were (40 labor and professional protests) and (34 social protests), as outlined in the following lines:

The program has monitored 40 labor and professional protests during the months of March, April and May, distributed as follows:

The program monitored 34 social protests during the reporting period, detailed in the following chart:

The (Health) sector topped the labor and professional sectors with 10 protests during the reporting period, due to the spread of the coronavirus pandemic and the lack of medical supplies and protective tools for medical teams working in the Ministry of Health-affiliated hospitals. (Spinning and Weaving) sector came second with 9 protests, followed by the (Sport) sector in the third place with 5 protests. The (Transportation) sector came in the fourth place with 3 protests, followed by the sectors of (Education and Scientific Research, Tourism, Metallurgical and Engineering industries, Localities and services) with 2 protests in each sector. At the end of the list came the sectors of: (Agriculture, Irrigation, Fishing, Public utilities, Chemical industries, and Construction and Building materials) with one protest each.

The Security sector came at the forefront of the social protests during the three months with 11 protests. The other sector came in second place with 9 protests. These sectors include: suicide cases and protests organized by expatriates stranded in front of their embassies and dozens of Alexandria residents demonstrating to welcome Ramadan Holy month and denouncing the coronavirus pandemic. The sectors of (Health, Localities and Services) came in the third place with five protests each, followed by the sectors of (Public utilities, Communications, Construction, Insurance and banks) with one protest each.

In the end, we would like to emphasize that all the protests took place during the reporting period were organized without any coordination with trade union organizations, whether labor or professional unions, except for the doctors ’protests in which the Doctors Syndicate stood to defend the doctors; demanding to address shortcomings in protection for doctors, shortages in medical supplies, the unpreparedness of hospitals, and the lack of proper training on how to deal with patients in quarantine hospitals. The Doctors Syndicate also demanded that PCR testing be conducted on medical staff dealing with coronavirus cases, and that quarantine facilities be allocated for infected medical professionals nationwide. It also demanded that families of doctors and nurses who fall victim to the virus be financially compensated in the same way as police officers and armed forces servicemen and women who die in the line of duty.

In response, the Prime Minister and the Minister of Health decided to hold meetings with Hussein Khairy, the head of the Doctors ’Syndicate, and responded to two of the Syndicate’s demands; by ordering the immediate expansion of PCR testing for medical staff, and the allocation of areas in each hospital to isolate infected doctors. (1)