How to incarcerate a journalist and undermine his liberty?! A deep look at journalist 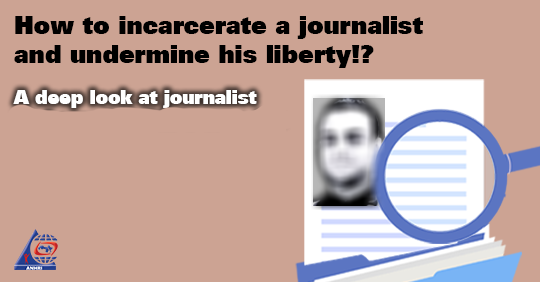 Question: What do you say about what is attributed to you that you are accused of joining and assuming the leadership of a terrorist group (Muslim Brotherhood group), while being aware of its goals; committing terrorist crimes and using terrorism as a means to achieve and implement these purposes, as indicated in the papers?

Question: What do you say about what is attributed to you that you are accused of possessing a printing and recording means which you used to disseminate “takfiri” (blasphemy) views against the army and the police while targeting them using hostile operations, in addition to targeting the Christian community and their places of worship, calling for killing them and seizing their property, and targeting vital facilities, especially those affiliated with the security forces?

The Haram Prosecution leveled the aforementioned baseless charges against the 20-year journalist Moahmed “D R”, 30 days after he was arrested from his home and forcibly disappeared. “D R” is a journalist who works as an editor and proofreader for the automotive, technology, science, health and tourism departments of the “Ultra Sawt” website since April 2017.

With a one-page investigation paper which contains only unsubstantiated and flimsy words with no supporting facts or evidence or even a single presumption that can prove “D R” ‘s involvement in such illegal acts, the journalist’s detention is being renewed. So, what does the investigation paper revolve around?

In this regard, the Court of Cassation ruled that: Police investigation, as a presumption, is nothing more than a mere opinion of the one (police officer) who conducts it, and cannot be used, in itself, as sufficient or independent evidence to prove the accusation.

Sixth: Regarding the abhorrent accusation of “joining and leading a terrorist group”

Seventh: The diminishment of Justice is in favor of whom?

In conclusion: We still recommend:

The Arabic Network for Human Rights Information (ANHRI) recommends the immediate and unconditional release of journalist “D R” the opening of investigation into the incidents of his arrest, enforced disappearance and the misleading of those in charge of the implementation of justice using fabricated and baseless investigation records. ANHRI also recommends opening an investigation into the illegal seizure of two mobile phones (Apple iPhone) belonging to the journalist and his wife during the journalist’s arrest, without holding them as exhibits to be presented before the Prosecution accompanying the investigation record.