The state of emergency and anti-terrorism laws… Terrorism didn’t decline, human rights did 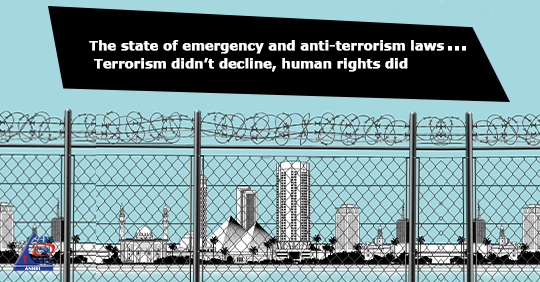 Exceptional laws are for exceptional cases. But in Egypt, the exceptional cases seem to be persistent except in a few situations. Since 1958 till the post-2013 period, when Egypt witnessed an expansion in such exceptionalism accompanied by extraordinary suppression of freedom of citizens, the adoption of exceptional laws has excessively increased. The government enacted the draconian Anti-terrorism Law which includes many vaguely-worded phrases and loose articles that directly undermine the freedoms and rights of citizens and broaden the powers granted to the security apparatus in Egypt. But it seems that this law wasn’t sufficient that the government reintroduced the notorious Emergency Law which remained in force throughout the entire 30 years of Mubarak’s rule and was first enacted in Egypt in 1958. Enacted, supposedly, for exceptional circumstances, the emergency law imposes a package of measures, grants the Ministry of Interior broad powers, and restricts the authority of the judicial branch. The Egyptian emergency law has been recently amended despite the fact that the Constitution forbids renewing a state of emergency more than once except under certain conditions.

A brief history of the emergency law:

A legal overview of the anti-terrorism law:

In June 2015, following the assassination of Public Prosecutor Hisham Barakat, President al-Sisi vowed to amend laws and the way courts work in the fastest possible time to suit the new circumstances! Accordingly, the Anti-terrorism Law (No. 94/2015) was passed after it was approved by the Cabinet, and the Parliament in haste voted for it (among 341 other laws in only 15 days), despite the seriousness of its articles and its penalties that can include capital punishment! Several amendments were then made to the law, the last of which was in March 2020.

Despite that this exceptional law faces wide backlash; given its loose and vaguely-worded terminology that can be interpreted and used against citizens curbing their freedoms and behavior and making them easily subjected to prosecution, it has been implemented and amended more than four times. Every year, thousands of citizens are imprisoned over a state security case in connection with this law, which has expanded upon successive amendments until it has become a special constitution that is being used to crack down on all forms of dissent, including leftists and secularists, over terrorism-related charges. (1)

The most prominent amendments to the Anti-terrorism Law:

The Anti-terrorism Law witnessed several amendments, the first of which was in April 2017 (3) when a new article was added to the law while rescinding an article from the Code of Criminal Procedure. Another amendment was made in February 2019 (4) by imposing further penalties with regard to lease contracts (leasing a property to another person) among other restrictions that were made under the guise of counter terrorism, followed by another amendment in late May 2019 (5). Then, in March 2020 (6), Ali Abdel Aal, the Parliament speaker, approved another amendment to the law asking those who objected to the amendment to stand up and when no one did so, he announced the approval of the law unanimously. This time the amendment was to impose more restrictions travel bans and asset freezes on whoever is suspected of funding terrorism, as interpreted by those in power.

These repeated amendments to the Anti-Terrorism Law No. 94 of 2015 were accompanied, at other times, by amendments to the Terrorist Entities Law No. 8 of 2015, which has been also expanded, among other packages of legislation, causing an accumulated legislative chaos of exceptional laws pertaining to what is called “terrorism”.

Life under the emergency law:

Despite the existence of the Anti-terrorism Law with its several amendments, President al-Sisi declared, on 9 April 2017, a state of emergency and the implementation of the emergency law, following deadly church blasts that killed 45 people and injured many others, and since then, the state of emergency continued to be renewed on a continuous basis until today.

Although Article (154) of the Egyptian Constitution states that “The President of the Republic declares, after consultation with the Cabinet, a state of emergency in the manner regulated by law. In all cases, the declaration of a state of emergency must be approved by a majority of members of the House of Representatives. The declaration is for a specified period not exceeding three months, which can only be extended by another similar period upon the approval of two-thirds of House members”, the state of emergency is still being renewed until now in a clear circumvention of the Constitution (7). The last renewal was in late April 2020.

This renewal of the state of emergency was declared days after an amendment to the Emergency Law No. 162 of 1958 was approved (8). This amendment includes the addition of 18 new clauses to article 3 of the law, which are represented in new measures that can be taken by the President of the Republic or his delegate in emergency situations such as facing a health crisis, like the coronavirus (COVID- 19) pandemic.

Do we need exceptional laws to combat terrorism?

Is it permissible to legalize violations and encroachments on human rights by turning them into a legal action? There are global foundations for the preservation of human rights in general and freedom of opinion and expression in particular. The latter may witness some limited restrictions, but these restrictions must be imposed for specific periods and for clear reasons, and on condition that the subsequent consequence resulting from the suspension of the right is less harmful than lifting restrictions on it. But in fact, we have been living in an extraordinary era that continues to be persistent since nearly the sixties!

In the current era, do we really need the Anti-Terrorism Law with its repeated amendments, along with the Protest Law and the Terrorist Entities Law and above all a continuous declaration of the state of emergency?

The government is the entity entrusted with protecting human rights by enforcing binding laws that guarantee all forms of human rights, starting from the right to life, education and health to the right to freedom of opinion and expression. The Egyptian natural law involves manifold legislation that is capable of maintaining security and order without resorting to violate human rights, a matter that is always deemed justifiable by anti-terrorism and emergency laws. This legislation includes: the Code of Criminal Procedure which is amended from time to time (9) and Law No. 164 of 2019 amending the Penal Code No. 58 of 1937 (10), among other laws that provide legal provisions sufficient to confront crimes in their various forms.

The legislative situation in Egypt in this period is really chaotic. A large number of legislation and laws is introduced during a short period of time. Some of these laws are critical and need extensive discussion, as is the case with the Anti-Terrorism Law which the Parliament enacted concurrently with 341 other laws in only two weeks, not to mention the continuous amendments made to such laws. This is in addition to the fact that the state of emergency has been renewed for more than ten consecutive times so far, in a flagrant circumvention of the Constitution that provides for the inadmissibility of renewing a state of emergency more than once except under certain conditions following popular assent. Therefore, we at the Arabic Network for Human Rights Information (ANHRI) can say that terrorism and the state of emergency are predominant in the legal situation in the country. We do believe that these laws can only serve to boost the regime’s siege of human rights and undermine the right to fair trial while imposing further restrictions on freedom of expression.

As we have explained, these are exceptional laws and are supposed to be introduced in certain cases. They shouldn’t be continuous in a way that most dissidents are brought to trial over them or that political life is governed upon their provisions. These laws are being used as a tool to legalize, or legally justify, the large-scale and unnecessary violations of human rights. The natural law can guarantee the protection of society against terrorist attacks, but these exceptional laws have indeed eliminated human rights and freedoms bringing legislation into a state of chaos where the value of justice is undermined.