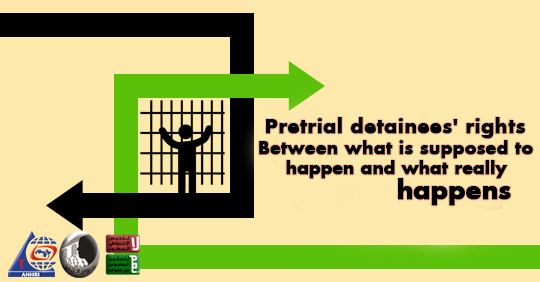 “The accused is innocent until proven guilty” is not just a cinematic term but it is a constitutional and legal right and a fundamental principle that is enshrined in all laws and legislation. However, in reality, pretrial detention has become a tool of punishment against defendants by violating their rights stipulated by law, ignoring the fact that pretrial detention is originally “a harsh measure that should be carried out in specific cases”; as it should be used in extreme cases and with specific conditions since it undermines the freedoms of citizens who haven’t yet been proven guilty.

In this paper, we will clarify the rights guaranteed by law for pretrial detainees at different levels of legal obligation; from the international charters and treaties to the Egyptian laws that explicitly set out a bundle of rights for those held in remand detention in a way that would limit the deprivation of their liberty, starting from the Egyptian Constitution to the Prisons Regulation Law and its bylaws and amendments thereto.

There are several general principles in the international charters that are established to reduce the number of detainees held in custody; either by finding alternatives or by restrictively tightening the remand measure shortening its duration as much as possible.

* Article (9.3) of the International Covenant on Civil and Political Rights states that “It shall not be the general rule that persons awaiting trial shall be detained in custody…”

* Rules (5, 6, 8 & 9) of the Tokyo Rules state that “Pretrial detention shall be used as a means of last resort in criminal proceedings…”

* The United Nations Human Rights Council and the UN Committee against Torture states that “Pretrial detention should be used as an exception and applied for limited periods of time”.

This is in addition to manifold provisions that restrain the pretrial detention measure and limit its duration as much as possible. All covenants with their different forms safeguard the rights of those held in remand detention, and in the following lines, we will point out the general principles of these rights as stipulated in the international conventions and treaties.

* Article (9.2) of the International Covenant on Civil and Political Rights: “Anyone who is arrested shall be informed, at the time of arrest, of the reasons for his arrest and shall be promptly informed of any charges against him”. Likewise, a different set of principles and rules stipulated the person’s right to immediately inform his family of the place of his detention, and to communicate with a legal counsel of his own choice.

* Article (56) of the European Code of Police Ethics: “The police shall provide for the safety, health, hygiene and appropriate nourishment of persons in the course of their custody. Police cells shall be of a reasonable size, have adequate lighting and ventilation and be equipped with suitable means of rest.”

* Article (47) of the 12th General Report on European Committee for the Prevention of Torture and Inhuman or Degrading Treatment or Punishment (CPT) also stresses the aforementioned rights; stating that “persons held in police custody should have ready access to clean drinking water and be given food at appropriate times and should be offered outdoor exercise every day.“

* The UN Committee against Torture states that detainees have the right to be examined by a doctor of their choice and consult a lawyer of their choice while allowing their relatives to visit them during their detention.

* Rule (24) of the Standard Minimum Rules and principle (24) of the UN Body of Principles on Detention states that a proper medical examination shall be offered to a detained or imprisoned person as promptly as possible after his admission to the place of detention or imprisonment, adding that not conducting this examination may facilitate the crime of torture.

With these simple rules, we can find that all international charters of different forms focus on guaranteeing the rights of those held in pretrial detention to maintain their dignity and protect them from any psychological or physical harm during the period of detention.

After introducing some of pretrial detainees’ rights guaranteed by the international conventions, we will go deeper into the Egyptian legislation listing the rights stipulated therein which ensure and respect the dignity of defendants during the period of their investigation. Egyptian legislators also focus on restricting pretrial detention with a number of conditions and alternatives that would make it an “abhorrent” albeit necessary measure that should be carried out with specified and well-defined criteria, and not rather an absolute procedure.

The Egyptian constitution, laws, and regulations guarantee a number of rights for those held in remand detention to ensure the respect of their dignity and mitigate the harshness of their detention and the deprivation of their freedom. These rights and their origins in the Egyptian legislation are pointed out as follows:

** Article 54 of the Egyptian Constitution:

“….Citizens may only be apprehended, searched, arrested, or have their freedoms restricted by a causal judicial warrant necessitated by an investigation. All those whose freedoms have been restricted shall be immediately informed of the causes therefore, notified of their rights in writing, be allowed to immediately contact their family and lawyer, and be brought before the investigating authority within twenty-four hours of their freedoms having been restricted. Questioning of the person may only begin once his lawyer is present. If he has no lawyer, a lawyer will be appointed for him. Those with disabilities shall be provided all necessary aid, according to procedures stipulated in the law.“

“The law shall regulate preventive detention, its duration, causes, and which cases are eligible for compensation that the state shall discharge for preventative detention… In all cases, the accused may be brought to criminal trial for crimes that he may be detained for only in the presence of an authorized or appointed lawyer.“

** Article 55 of the Egyptian Constitution:

“All those who are apprehended, detained or have their freedom restricted shall be treated in a way that preserves their dignity. They may not be tortured, terrorized, or coerced. They may not be physically or mentally harmed, or arrested and confined in designated locations that are appropriate according to humanitarian and health standards. The state shall provide means of access for those with disabilities. Any violation of the above is a crime and the perpetrator shall be punished under the law. The accused possesses the right to remain silent. Any statement that is proven to have been given by the detainee under pressure of any of that which is stated above, or the threat of such, shall be considered null and void”.

** Article 55 of the Egyptian Constitution:

“Prisons and places of detention shall be subject to judicial supervision, where actions inconsistent with human dignity or which endanger human health shall be prohibited.”

– Pretrial detainees’ rights as stipulated in the Prisons Regulation Law No. 396 of 1956:

1- The right to have a furnished separate room that “consists of a bed and a mattress, a small table, a chair, and a mirror”, among other specific items listed out in the prison bylaws/regulations, which we will point out in detail in the subsequent section.

2- The right to wear their private white clothes

Article 15: “Persons in preventive custody have the right to wear their private clothes, unless the prison administration decides, for reasons of health, cleanliness or in the interest of security, that they should wear the same clothes intended for other prisoners.”

3– The right to bring the food from outside

Article 16: “Persons in preventive custody may bring the food they need from outside the prison or buy it in the prison at the specified price. If they do not so want or can, they shall receive the determined food.”

4- Detainees shall not work unless they wish so

Article 24: ” Persons in preventive custody or sentenced to simple imprisonment may not work, unless they so wish.”

Pretrial detainees’ rights as stipulated in the Prisons (Internal) Regulations/bylaws

– In the following lines, we will introduce a number of the rights guaranteed for those held in preventive detention as stipulated in the Prisons Internal Regulation and its amendments No. 3320 of 2014 (2) upon the Minister of the Interior Decision No. 79 of 1961. (1)

1- The right to have a daily outdoor exercise

Article 85 bis 3: “… Persons in preventive detention are allowed to have sporting queues for two hours per day (one hour in the morning and one hour in the evening) during the period of their detention”.

Article 71 : “The period of regular and private visits in accordance with the law is sixty minutes, and the prison warden may extend the period if necessary …”.

3- The right to have a furnished room

Article 83 lists in detail the items that pretrial detainees can have in their prison rooms including; “a bed, a mattress, a pillow, a wool blanket (and two in winter), a mat, a wood chair, and iron bracket, an iron dish, a soap (in case there is no sink or faucet in the room), a small table, a mirror, a bowl and dish for drinking water, hair brush, a comb, a fork and spoon, a cup and a small metal plate.”

4– The right to bring basic amenities from outside the prison

Article 8: “… It is permissible to bring, at their own expense, from outside the prison: a bed, a mattress, a pillow, and a bathrobe, or to possess family photos, books, journals and magazines, or tools of lightening…Cigarettes, fruit, candy, and different foods are also allowed to be brought in visitation.”

5- The right to possess books, newspapers and magazines

Article 15: “Persons in preventive detention have the right to bring whatever books, newspapers and magazines they are authorized to have…”

6- The right to a medical examination

Article 27: “The prison’s physician shall examine every prisoner immediately upon his admission to prison, but no later than the morning of the following day, and shall register his health condition and the type of work he is able to perform…He shall visit every prisoner in solitary confinement daily…”

7– The right to healthy food

Article 45 specifies the daily diet that prison administration distributes on detainees based on a predefined schedule- amended in 2001- which includes: bread, beans, cheese, and eggs for breakfast- meat, rice, and vegetables for lunch- and cheese and beans for dinner. Article 46 also stipulates that food should be served hot and cooked well.

9- The right to keep up a correspondence

Article 60: “Persons in preventive custody have the right to keep (send or receive) a correspondence at any time. The prison administration shall transfer the papers and all implements that are necessary for writing letters.”

10- The right to use writing implements/instruments

Article 67: “The prison administration allows persons in preventive detention to use papers and all other necessary writing implements/instruments”

11- The right to carry on the religious duties

Article 74: “A priest is allowed to visit members of his Congregations and to eat the Eucharist”

The above are some of the violations committed against those held in pretrial detention pending state security cases, and we are monitoring them in detail since they have become a common practice and a matter of routine nowadays. Introducing some of the rights guaranteed for pretrial detainees as stipulated in the Egyptian constitution and the prison regulations/bylaws alongside the international charters and conventions, we demand that the law be applied immediately and that all detainees held in custody be granted their rights. We further assert that pretrial detention is nothing but an abhorrent measure that has its terms and regulations, which if not applied will be turning into a tool of punishment to crack down on opponents and dissidents and a form of legalized detention.