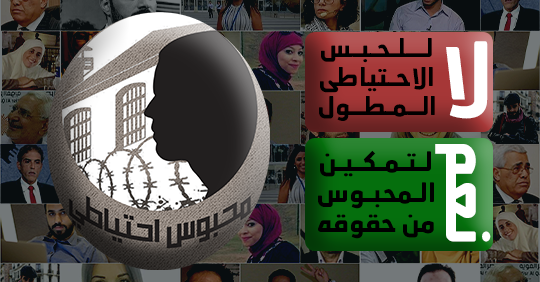 The Arabic Network for Human Rights Information (ANHRI) has addressed the Parliament Speaker, the Cabinet, and the Council of Judicial Bodies to submit a request to the Minister of Justice to make an explanation for the apparent discrepancies in the legal provisions pertaining to the pretrial detention period outlined in the Criminal Procedure Code.

ANHRI’s Criminal Justice Program said: “Today we sent registered letters with proof of delivery to the Parliament Speaker, the Cabinet and the Council of Judicial Bodies, so that the Minister of Justice fulfills his constitutional role by submitting a request to the Constitutional Court to interpret Articles 143 and 380 of the Criminal Procedure Code”.

Article 143 of the Criminal Procedure Code sets the maximum limit for remand detention at two years,

While some judges based their decisions on Article 380 which doesn’t set a limit for remand detention.

Due to the inconsistency in the implementation of the two aforementioned articles at courts and the Public Prosecution, there has been a gross breach of citizens’ constitutional and legal rights, particularly the rights to enjoy personal freedoms, freedom of movement and the presumption of innocence.

The program added that “Article 33 of the Constitutional Court Law entrusted the Justice Minister, upon a request submitted by any of the three bodies, to make a request before the Supreme Constitutional Court to give an interpretation on the provisions issued by the legislative authority, as well as decisions issued by the president of the republic, if they generate a discrepancy regarding their implementation and hence necessitate a unified interpretation of the provisions”.

It is worth mentioning that the discrepancy in the implementation of Articles 143 and 380 of the Criminal Procedure Code has led hundreds or thousands of citizens to be held in pretrial detention for long periods, some of which exceed the legally established limits. It also deprives detainees of their most basic constitutional and humanitarian rights, which resulted in thousands of social tragedies; many families have had no breadwinner and children have been left with no care and students with no future, a matter that would threaten the integrity of the entire social structure of the country.

ANHRI will start from today to carry out several procedures whose main goal is to reach a legal interpretation that might stop such inconsistency and discrepancy determining the maximum period of pretrial detention. We also seek to enable detainees to enjoy their legal rights throughout their detention period and our first step would be: launching a petition on ANHRI’s website demanding to put a limit to the pretrial detention period in order to enable detainees to retain all their legal rights, through the following link.

ANHRI calls on whoever believes in justice and the rule of law in Egypt to sign the petition through this link: