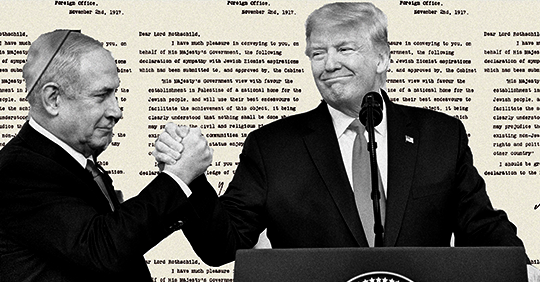 Over the last three years, the Trump administration has increasingly implemented one-sided policies favoring the Government of Israel that contravene international law and reward Israel’s illegal actions. These policies reinforce repression and incite violence, posing significant risks to regional stability. The so-called “Deal of the Century” is a culmination of the Trump administration’s normalization of Israel’s crimes against the Palestinian people.

It is of grave concern that some Governments of the region, including Saudi Arabia, Egypt, and the United Arab Emirates welcomed the plan as a starting point for negotiations and failed to reiterate a commitment to uphold the inalienable rights of the Palestinian people to self-determination, including permanent sovereignty over natural wealth and resources, and the right of Palestinian refugees to return to their homes, lands, an property, as mandated by international law since the Nakba. Regional States and the international community must ensure that the rights of the Palestinian people are upheld in any peace negotiation, and reject the Trump administration’s deal as a transparent effort to negate Palestinian rights and further entrench Israel’s apartheid regime over the Palestinian people as a whole.

Instead of upholding international law and Palestinian rights, the Trump administration’s plan rewards Israel for its illegal colonization of the occupied Palestinian territory (oPt) by allowing Israel to annex more territory, in flagrant violation of international law, in particular the absolute prohibition on the acquisition of territory by force. The deal reaffirms the United States’ unlawful recognition of Jerusalem as the capital of Israel, defying international consensus and unilaterally stripping Palestinians of their claims to sovereignty.

With regard to Gaza, the plan fails to address the underlying causes of the crisis, which stem from Israel’s prolonged military occupation and 12-year closure, which has made Gaza uninhabitable. It places the onus of responsibility on the Hamas authorities in Gaza, while failing to mention Israel’s extraordinarily punitive 12-year air, land, and sea blockade of Gaza’s borders. This closure has made Gaza unlivable, resulting in high-levels of aid-dependency, food insecurity, poverty, and unemployment; and a collapsing health sector facing severe shortages in medicines and medical supplies.

Moreover, the plan seeks to block avenues for Palestinians to pursue justice. In the event of negotiations, the Palestinian Authority (PA) would be required to dismiss all pending actions against “the State of Israel, the United States, and any of their citizens before the International Criminal Court, the International Court of Justice, and all other tribunals” as well as any action against an Israeli or United States citizen before a legal system of a third party state. Such impunity rewards violations, and invites further assaults on the rights and dignity of the Palestinian people.

In contrast to the Trump deal, any legitimate and effective peace process must be based upon the principles of international law, justice, and equality; with meaningful Palestinian participation and full respect for Palestinian rights as defined by international law. Fulfilling Palestinian rights in accordance with the international framework requires bringing an end to Israel’s occupation and colonization, and ensuring accountability for widespread and systematic human rights abuses, including suspected war crimes and crimes against humanity, perpetrated by Israel, the Occupying Power.

The Trump administration has given its approval to further the fragmentation of the Palestinian people, thereby accelerating the entrenchment and expansion of Israel’s apartheid regime over all Palestinians. The United Nations (UN) Special Rapporteur on the situation of human rights in the Palestinian Territory occupied since 1967, Michael Lynk, has warned that “[t]his is not a recipe for a just and durable peace but rather endorses the creation of a 21st century Bantustan in the Middle East,” consisting of no more than “scattered archipelagos of non-contiguous territory completely surrounded by Israel.”

The plan allows for the maintenance of Israel’s Annexation Wall, deemed illegal in 2004 by the International Court of Justice, which cuts off East Jerusalem from the rest of the West Bank, separating Palestinians from one another and severely impacting their daily lives. To further advance Israel’s fragmentation of the Palestinian people, the Trump administration supports denying Palestinian refugees and exiles the right of return to their homeland. Furthermore, the proposal outlined by the Trump administration would also result in the forcible transfer of over 260,000 Palestinian citizens of Israel from the Triangle region to a future “Palestinian enclave,” according to Adalah.

The international community and global civil society played an instrumental role in bringing an end to the South African apartheid regime. It is vital that States of the region and the international community recognize the same discriminatory regime is being imposed by the Government of Israel over the Palestinian people, with the backing of the United States. Supporters of human rights, international law, and justice and equality – who reject the stain of apartheid in the 21st century – must exert the same pressure today to uphold the inalienable rights of the Palestinian people and bring an end to Israel’s apartheid regime over all Palestinians.