“We know that there aren’t any.. but you tell us: What leftist, nationalist, liberal or secular terrorist organizations are there for which innocent people are being imprisoned?! 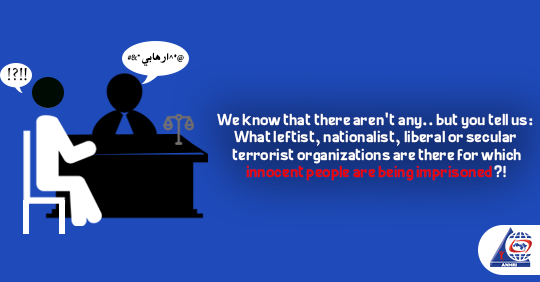 This was easy during former dictator Hosni Mubarak’s rule, when dissidents and critics were arrested under a state of emergency that had been prevalent during his entire reign.

But the matter is different now, not too much, albeit worse-probably or as we perceive it- but anyway it varies.

Despite the state of emergency being in effect, the imprisonment of opponents and critics is now based on decisions issued by the Public Prosecution, making the incarceration of many people take place in the following context:

This charge and its derivatives have become the common denominator of all the cases considered before the State Security Prosecution, which have now- approaching the end of the year- reached 1,400 cases, each of which involves a large number of defendants. Case No. 1338 of 2019 is the most case that includes the largest number of defendants (more than 3,000 defendants) since the September 20 protests and it is still ongoing up to the present.

The Public Prosecution doesn’t answer us!

Nevertheless, does this law- or other laws- apply to a huge number of leftists, nationalists, liberals and secularists, who are not only accused of joining, participating in, or financing a terrorist group, but are also detained over such charges (and their detention is still ongoing)?

They are not affiliated whatsoever with the political Islam stream, but rather they oppose and antagonize it.

Are there leftist, secular, nationalist and liberal terrorist organizations that the authorities are aware of, but don’t declare?

So again, how can we defend them?

We monitor (10 cases) as a sample of cases where such vaguely-worded charge is being used as a pretext for the imprisonment of politicians, journalists, lawyers, activists and academics, who have been detained and accused of strange charges, or the “other things” charges, that make no sense.

10 examples of cases that include the “terrorist group” accusation against secularists, leftists, liberals and nationalists

After starting to implement the “anti-terrorism law”, charges of “joining/participating/financing” a terrorist group, which we previously referred to, have consequently emerged from it. Although the law is drafted using loose and vague terminology, it doesn’t apply to the leftist, secular, nationalist, and liberal critics or opponents. Let us give some examples of these cases listed in chronological order:

Charges: Joining a group that is established contrary to the provisions of the law and incites to disrupt constitutional provisions, preventing state institutions from carrying out their duties, and abetting a terrorist organization in achieving its aims of overthrowing the current regime, with knowledge of its purposes.

Legal status: Al-Aa’sar and al-Banna were detained on the 4th of February 2018, and then they appeared on February 17, setting off a wave of detention renewal sessions, which is yet to end, pending the case. Later on, a large number of people with different affiliations were added to the case without any clear link or connection between them. Thereafter, and at different dates, Wael Abbas and Shorouk Amgad were released with precautionary measures, while journalists al-Banna, al-Aa’sar and Wadnan- among others- are still kept in detention over these unsubstantial accusations.

Charges:  Joining a terrorist group established contrary to the provisions of the law.

Most prominent defendants: Dr. Shadi al-Ghazaly Harb, former member of the Dostour Party “a liberal” and one of youth representatives of the January 25 Revolution, Aml Fathy “a liberal”, wife of the executive director of the Egyptian Commission for Rights and Freedoms (ECRF), and satirical video blogger Shady Abu Zeid (former correspondent for comedy TV show Abla Fahita), in addition to the political activist Sherif al-Roubi and vlogger Mohamed Oxygen.

Legal status: The case began in March 2018, concurrently with the 2018 Egyptian presidential elections, with the arrest of a number of rights activists. Further names continued to be added to the case under broad and unsubstantiated charges reflecting the Egyptian state’s targeting of activists and human rights defenders, and as usual without specifying what this group that secular and civilian terrorists is.

Legal status: On 23 August 2018, we were surprised that a number of well known academics and politicians were arrested against the backdrop of an initiative presented by former ambassador Masoum Marzouk to redress the country’s economic situation. The detention of all the defendants continued to be renewed until a release order was issued for the ambassador and his companions on 20 May 2019. However, throughout the whole period of detention (almost a year), none of the defendants identify the nature of this terrorist group that high-level civil and academic icons had taken part in!

Charges: Joining a terrorist group with the knowledge of its purposes.

Legal status: On 27 January 2018, the case began with the arrest of a group of Karama Party’s members (an official leftist party) against the backdrop of organizing a ceremony at the party’s headquarters commemorating the anniversary of the glorious January Revolution. On 7 March 2018, trans woman Malak al-Kashif was added to the same case in connection with March Protests, after she had been forcibly disappeared for 3 days, until she was ordered a conditional release pending the case.

Legal status: The defendants’ detention has been continuously renewed since February 2019 without facing them with any exhibits or evidence, in addition to the fact that they don’t know what this terrorist group or this funded terrorist plot is, and how the Civil Democratic Movement’s founder along with a former MP and members of a civil party took part, all together, in a single terrorist act!

Charges: Aiding a terrorist group to achieve its goals

Legal status: The case began in March 2019 when a number of defendants, detained against the backdrop of the protests sparked by Ramses tragic accident (train crash), were added to the case. Some of them were released on probation; however, the case took a new course when two of the lawyers who were defending the suspects were included in the case as defendants not lawyers! The two lawyers are; Mahinour El-Masry and Amr Imam. Detainees from completely different categories and segments have been also added to the same case since September 2019 incidents. With the detention of the well-known leftist labor union leader Kamal Khalil, along with lawyers and human rights defenders known for their human rights activities and their leftist political affiliations such as Mahinour El-Masry and Amr Imam, and rights activist and journalist Esraa Abdel-Fattah, in addition to the journalist, former spokesman of the National Salvation Front (NSF) and the Civil Democratic Movement member Khaled Daoud, the case is still ongoing, with the defendants facing unsubstantial charges of joining an ambiguous group!

7- Case No. 741 of 2019 Supreme State Security Prosecution “a leftist, rights activists and liberals”

Charges: Aiding a terrorist group to achieve its goals.

Legal status: The defendants’ detention has been constantly extended since May 2019, without facing them with any evidence or exhibits. They are also not aware of the nature of that terrorist group and how a leftist lawyer, a human rights defender and a civil activist can all be involved in its activities.

Charges: Joining, participating in, and funding a terrorist group, and coordinating with the group’s fugitive members

Legal status: On 25 June 2019, the Ministry of Interior announced what it called “thwarting the Plan for Hope”, and since then, the detention of a group of political detainees and civilian leaders has been renewed on a continuous basis, without identifying the terrorist organization that a group of renowned leftists, civilians and politicians took part in!

Charges: Aiding a terrorist group in achieving its aims

Legal status: This case has witnessed many legal violations; ranging from the arbitrary arrests and the detention of suspects in illegal places to the enforced disappearance they are subjected to. Release order lists have already been made, but there are nearly 2,000 randomly-arrested detainees who are still being held in detention, most notably feminist activist Asma Deabis and dentist Hazem Ghoneim, who appears to be arrested only because he is Wael Ghoneim’s brother. None of the defendants has, so far, been notified of the name of the terrorist group which this huge and random number of defendants- including children, women, workers, merchants and even pro-regime people- took part in!

Legal status: On 29 September 2019, a new case has emerged, and as usual, its defendants are facing a charge of joining a terrorist group- among other charges. The defendants who have already been interrogated pending this case and charge are; Mohamed al-Baqir, a human rights lawyer and director of Adalah Center for Rights and Freedoms, and renowned blogger and political activist Alaa Abdel-Fattah. The authorities refused to identify the name of the terrorist group or determine its identity. Based on such charges, both of them remain held in a high-security prison, where they were assaulted the night they were put in jail (3), and no action has been taken yet despite lodging an official complaint about the incident.

We still ask: What are the terrorist organizations that have been established by leftists, human rights activists, secularists, liberals and nationalists all together?! What is this terrorist group that those with such secular backgrounds belong to?

We call on the Egyptian authorities, represented by the Public Prosecutor, to provide a specific clarification regarding these terrorist groups and brief us, in our capacity as lawyers, about this matter; so that we can provide legal defense to defendants, or to release them immediately.